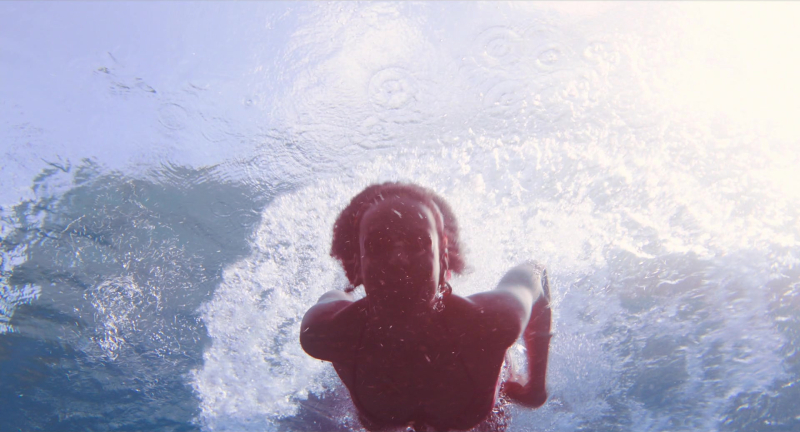 The "they" in this scenario is the evil government or something, for which Henry (Will Smith) is their John Wick. Gemini Man opens with Henry assassinating someone on a moving train from a hill a mile away. That's how amazing he is. But he's starting to grow a conscience and the need to monologue about it for pages and pages, and so this is his last hit before retirement. Evil spook Clay Verris (Clive Owen) thinks Henry is a loose end; against the wishes of good evil spook Janet (Linda Emond), he unleashes his top-secret Gemini project, which involves twins, right? But twins and clones are not the same thing, except they are. You know what, it doesn't matter. Soon, Henry is on the run from Junior, his twenty-five years younger self, born in Uncanny Valley, CA. At the end of a silly motorcycle chase, he hits the older Henry in the face with his motorcycle. There is a point at which "cool" is "camp," and Gemini Man is an instant camp classic. It'd be a Jupiter Rising class of camp classic, except it doesn't have any energy. At a certain point, Gemini Man transforms from the hyperkinetic neo-actioner that it's not very good at being into a soggy melodrama about a troubled, confused young digital man struggling to forge his own path through a confusing analog world. Smith, for what it's worth, is fatally asked to bisect his star quality. Lee is like a pathologist involved in the careful dissection of what makes a star and, in his high frame rate (HFR) experiments (more on that later), what makes a film. The problem with pathologists is their subjects are all dead. In turning in two performances, Smith splits the persona that made him a megastar--the effortlessly-charming Men in Black/Independence Day "aw, hell no!" Everyman of action--into an infinitely more mundane guy-too-old-for-this-shit on the one side, and a melancholy youngster trying to impress his father on the other. Combine them and you have an A-list cinema idol; separate them and you have everybody else.

Benedict Wong lends his talents as an old pilot buddy, and because this screenplay has sat around unproduced since the '90s, he does what Asian sidekicks have always done in American movies and goes into the great adventure before bwana. Likewise, Danny, who may have been written as a man but is assuredly now a woman, becomes a hostage with tape over her mouth. I would have liked if a film this interested in revolutionary technology was as interested in a progressive script--especially with our most feted Asian-American director at the helm. Lee, alas, seems most invested in the HFR and advanced 3-D gizmos that make the film look exactly like the porn knock-off of itself, calling attention to the absolute artificiality of the sets, the props, the smallness of the illusion of cinema when it's not shot on a medium that simulates, or is, film. High frame rate may be a space-age innovation, but to the naked eye it looks like the local news, or that home video you took on your phone of the community-theatre spring production. For Lee, it's a mountain to be climbed without first assessing if there's any point to the ascent, other than that it's there. There isn't. In truth, I'd be curious to see Gemini Man at a standard frame rate. I'm now the old man shouting at clouds.

Credit Gemini Man at least for allowing Lee another shot post-Hulk at eliciting human emotion through a digital simulacrum. An extended sequence--really, every sequence is extended--where Junior confronts his "dad" Clay (Junior should've been named "Clay," because the Bible) has the distinction of causing me to wonder whether Lee himself, as he did in Hulk, had done the face-mapping performance for the CGI puppet instead of Smith. Even money he did some of it. There's fascination in the conversation about why Lee is obsessed with this sort of Frankenstein pursuit and even some level of poignancy in connecting that impulse to create life from parts to the urge to create for any artist. Shelley's Frankenstein, after all, was originally credited to her husband and dissected as a patchwork o­­f various male poets' styles. She had written a story about a jigsaw man using jigsaw pieces of poesy. If only a real examination of the generally disastrous urge for men to biologically reproduce were the centre of Gemini Man rather than this awkward, solipsistic metaphor for the pain of getting older for a movie star. That's been done endlessly, and better (though less literal, The Rock's The Rundown, with its cameo from Arnold Schwarzenegger, is better)--and is too clearly a pretext for Lee to continue his field-testing of HFR. It's a proof of concept, not a feature; a high-concept, not a screenplay. It'll have a half-life, but for all the wrong reasons. There's your metaphor. Originally published: October 10, 2019. 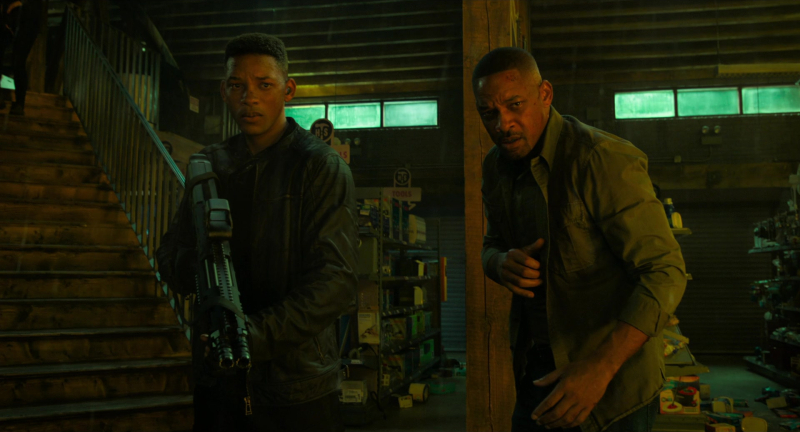 THE 4K UHD DISC
by Bill Chambers Paramount shepherds Gemini Man to 4K UHD disc exclusively in HFR, with the frame-rate maxed out at 60fps. Although the limitations of 4K Blu-ray prevent a true reproduction of the 3-D, 120fps original (the format doesn't support 3-D, either), the 1.85:1, 2160p transfer offers a much closer approximation than the attendant HD Blu-ray, which downscales the film to 24fps and 1080p. For what it's worth, conventional 120hz interpolation of the 1080p version does not give you the same effect as this HFR presentation: The latter features much more realistic movement than that Keystone Kops shit, and I can't say it looks like a soap opera, exactly--more like one of those high-end travel videos on YouTube. Moreover, the artificial boosts in sharpness and saturation one gets from motion-smoothing can't compare to a true 4K image with HDR embellishments. In UHD, Gemini Man is wildly tactile, occasionally to its detriment (the combination of high resolution, a high frame-rate, and high dynamic range places a slightly unhealthy emphasis on minute details, turning one shot of a high-school hallway at the 28:25 mark into a game of "did they just paint that wall?"), and incredibly vivid, though there's a peculiar pastiness to flesh tones in both 4K and 2K. (Note that the 4K disc includes HDR10 as well as Dolby Vision, the latter of which I couldn't audit.) And I can honestly say I didn't feel cheated out of 3-D; the motorcycle chase, a hall-of-fame-worthy set-piece, feels like glasses-free virtual reality. If you want to grasp the difference between 24fps and 60fps very quickly, check out the bizarre wide-angle, severely letterboxed shot of the train passing at 1:54: in HFR, individual windows flit past the camera--it's not just a streak of silver smearing itself across the screen.

If anything weirded me out it was the audio. Even without height channels, the Dolby Atmos track is huge, such that it almost overwhelms an image with the immediacy of something shot on a phone. It's a cognitive hurdle, this dissonance, but the mix certainly holds up its end of the bargain, especially during the aforementioned motorcycle chase and a scene involving a "minigun" that rips a convenience store to shreds with (laser-guided) bullets that bounce between the side channels, seemingly ricocheting off the walls. Dialogue sounds unusually rich for a contemporary feature film. Consisting of several HiDef featurettes and a deleted scene, supplementary material is relegated to the standard Blu-ray. In "The Vision of Ang Lee" (6 mins.), Lee claims that 24fps downscaled from 120fps is smoother than native 24fps. (I'm inclined to believe him based on the example of Gemini Man in HD, but it could be a placebo effect.) Clive Owen mentions the "different kind of acting" Lee demands but doesn't get to expand on it, although he does hint at scaling down his performance to suit the new technology. (It "picks up everything," Owen says.) Apropos of nothing, megaproducer Jerry Bruckheimer is starting to resemble Seth Green in old-age make-up. "The Genesis of Gemini Man" (3 mins.) reveals that Harrison Ford and Clint Eastwood were among those once earmarked for the Will Smith role, if not much else about the project's 25-year development. "Facing Your Younger Self" (6 mins.) finds Smith getting philosophical as he discusses the film's twist on an age-old concept, saying that meeting your younger clone is not like meeting yourself, "because you had one experience and they had another experience." Smith says he prepared for the acting challenge by revisiting stuff he did when he was 23, 24 and observed "a freedom and a recklessness" he's since outgrown. It's kind of interesting and could afford to be longer.

"The Future Is Now" (19 mins.) attempts to explain the picture's complex visual effects without dumbing things down too much. FX house Weta is celebrated for its attention to emotions and drama, and we see models of synthetic skin that are frighteningly realistic. Bad Boys-era Smith, we discover, provided the base model for the clone. Smith also wore various mo-cap rigs, while solid-state cameras planted throughout the set captured an infrared outline of his body. "It's a milestone in digital humans," Lee says with a smile, as if he's not a more benign Robert Oppenheimer. In "Setting the Action" (16 mins.), fight choreographer Jeremy Marinas says his team was warned to expect curveballs from Lee...and got them. We learn that the stunt drivers couldn't fake their high speeds like they normally would because the HFR cameras refused to lie. Actress Mary Elizabeth Winstead earns some overdue praise here. Finishing off the making-of content, "Next Level Detail" (4 mins.) zeroes in on Guy Hendrix Dyas's production design, specifically the catacombs set in Budapest (which Lee persuasively argues symbolize death and rebirth). I love that the rock floor is actually made of rubber so that Smith can wrestle on it painlessly. Rounding out the platter, the "Deleted Scene" is the first draft of an exposition-heavy scene that was later reshot. Perhaps its inclusion is intended to honour Zoltan Ratoti, who was replaced by another actor when the production moved from Budapest to New York. A voucher for a digital copy of Gemini Man is tucked inside the black keepcase. 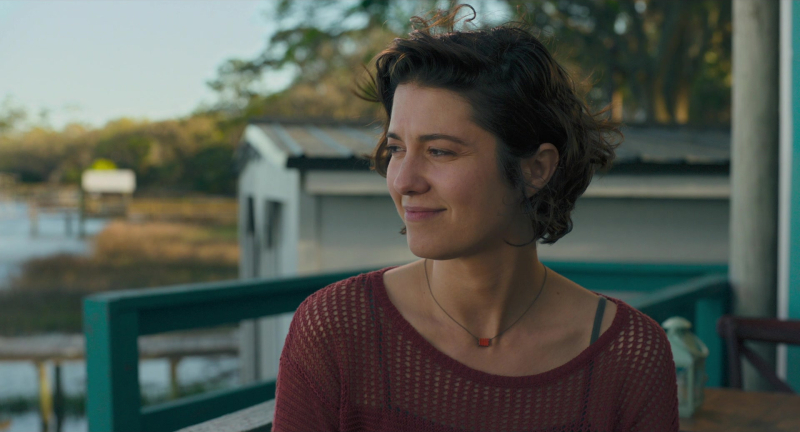