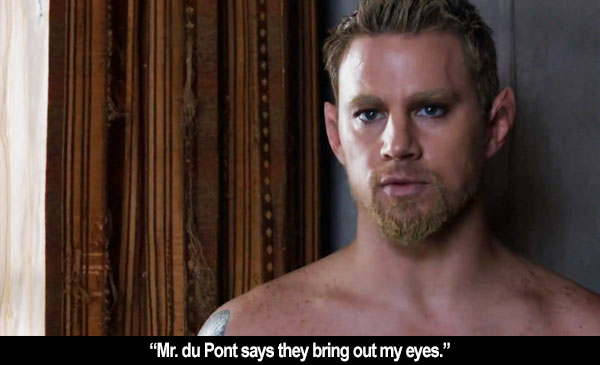 by Walter Chaw "Call me Jupe!" pipes Jupiter Jones (Mila Kunis) in her breathy, little-girl Lauren Bacall voice, and the Wachowskis' Jupiter Ascending in the same moment announces itself as the siblings' latest insufferable piece of shit about being born with a secret and embracing the real you. With mascara. Jupiter Jones is not the oldest of the Three Investigators, but she is the reincarnated Mina Murray, space queen of a clan of Atriedes/Harkonnen industrialists, and she has a special way with honeybees. That's good, since there's a scene where she visits a guy (Sean Bean) living in a house infested with honeybees. The guy has a daughter who is sick, which we know because she coughs a little before disappearing into the editing-bay ether with the rest of the connective tissue of a film too terrible to waste a summer slot on. Jupiter Ascending is kind of the Radio Shack of movies in that it's too expensive to not open, though it desperately needs to close. Just the fact that this reference will be completely obsolete in six months or so says everything that could be said about this trainwreck. And yet I persist.

Jupiter makes her living cleaning toilets until the day the dog she wants to fuck, Caine (Channing Tatum), saves her from the worst pap smear in history (making it the worst anything ever). Caine is a "splice" composed mostly of dog (like John Candy's Barf from Spaceballs, but less shirt-wearing); he used to have eagle wings, because the only thing that could make Magic Mike more desirable to women is to turn him into a dog with eagle wings. He also has hover rollerskates the bad guys don't think to take away from him when they put him in a kennel. The only thing that could make Magic Mike not-desirable to women, by the way, is to make him a professional roller-skater in the world's most expensive interpretation of Solarbabies-cum-"Starlight Express". Caine's job is to ferry Jupiter to the planet Gilliam Homage, where someone tries to trick her into marriage and then, in one of four or five identical sequences, Caine rescues her just in time. Good boy. I don't know what this movie is about.

I do know there are a couple of scenes where men seem to want to have sex with the reincarnation of their mother, as well as a few where Jupiter begs her pet to make sweet love to her. I think there's something wrong with both of those things, but I was too busy being glad that this Wachowski joint doesn't have yellowface defended by some notion of post-racial acceptance. Jupiter Ascending is huge in its failure; towering in its failure. I defended The Matrix sequels once for their mad pretension, and this is the thanks I get. It fits in with the Wachowskis' oeuvre, revealing that their films were only ever really about transformation and identity. At the end of the day, it's all Cinderfella. This version of Cinderfella involves impossible-to-follow action sequences, truly dreadful dialogue, and an immigrant family that plays like the family in Moonstruck if they were mice like in An American Tail. Plus a performance by Eddie Redmayne that achieves Malkovich-ian levels of fey/furious ham. Also, Redmayne has Demi Moore's lips, which I personally found to be distracting. Stupid sexy Eddie Redmayne.

At least it's fun to take stock of the horrific, jagged editing in the picture--evidence of the panic that must have set in when test audiences proved unpersuaded by this space opera--and the way that Michael Giacchino's score somehow finds a way to musically embody flop-sweat. Jupiter Ascending is almost staccato: a series of cause-and-effect vignettes punctuated by bad one-liners, then it's off to another part of space with some middle-aged Lady Bathory in a Soylent bath, then we meet more characters who disappear without a trace as soon as it's even remotely expedient to disappear them. The real pity of it is that every time these self-indulgent yahoos get a few hundred million of someone else's money to throw away on jejune vanity statements of self-discovery and pride, it essentially buys us a half-dozen more "sure thing" tentpole sequels.