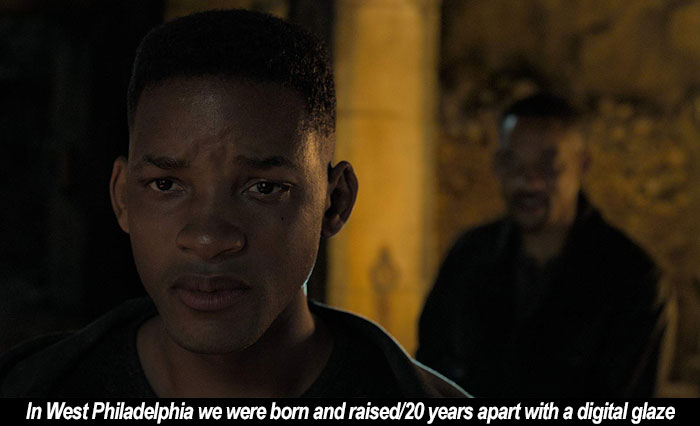 The "they" in this scenario is the evil government or something, for which Henry (Will Smith) is their John Wick. Gemini Man opens with Henry assassinating someone on a moving train from a hill a mile away. That's how amazing he is. But he's starting to grow a conscience and the need to monologue about it for pages and pages, and so this is his last hit before retirement. Evil spook Clay Verris (Clive Owen) thinks Henry is a loose end; against the wishes of good evil spook Janet (Linda Emond), he unleashes his top-secret Gemini project, which involves twins, right? But twins and clones are not the same thing, except they are. You know what, it doesn't matter. Soon, Henry is on the run from Junior, his twenty-five years younger self, born in Uncanny Valley, CA. At the end of a silly motorcycle chase, he hits the older Henry in the face with his motorcycle. There is a point at which "cool" is "camp," and Gemini Man is an instant camp classic. It'd be a Jupiter Rising class of camp classic, except it doesn't have any energy. At a certain point, Gemini Man transforms from the hyperkinetic neo-actioner that it's not very good at being into a soggy melodrama about a troubled, confused young digital man struggling to forge his own path through a confusing analog world. Smith, for what it's worth, is fatally asked to bisect his star quality. Lee is like a pathologist involved in the careful dissection of what makes a star and, in his high frame rate (HFR) experiments (more on that later), what makes a film. The problem with pathologists is their subjects are all dead. In turning in two performances, Smith splits the persona that made him a megastar--the effortlessly-charming Men in Black/Independence Day "aw, hell no!" Everyman of action--into an infinitely more mundane guy-too-old-for-this-shit on the one side, and a melancholy youngster trying to impress his father on the other. Combine them and you have an A-list cinema idol; separate them and you have everybody else.

Benedict Wong lends his talents as an old pilot buddy, and because this screenplay has sat around unproduced since the '90s, he does what Asian sidekicks have always done in American movies and goes into the great adventure before bwana. Likewise, Danny, who may have been written as a man but is assuredly now a woman, becomes a hostage with tape over her mouth. I would have liked if a film this interested in revolutionary technology was as interested in a progressive script--especially with our most feted Asian-American director at the helm. Lee, alas, seems most invested in the HFR and advanced 3-D gizmos that make the film look exactly like the porn knock-off of itself, calling attention to the absolute artificiality of the sets, the props, the smallness of the illusion of cinema when it's not shot on a medium that simulates, or is, film. High frame rate may be a space-age innovation, but to the naked eye it looks like the local news, or that home video you took on your phone of the community-theatre spring production. For Lee, it's a mountain to be climbed without first assessing if there's any point to the ascent, other than that it's there. There isn't. In truth, I'd be curious to see Gemini Man at a standard frame rate. I'm now the old man shouting at clouds.

Credit Gemini Man at least for allowing Lee another shot post-Hulk at eliciting human emotion through a digital simulacrum. An extended sequence--really, every sequence is extended--where Junior confronts his "dad" Clay (Junior should've been named "Clay," because the Bible) has the distinction of causing me to wonder whether Lee himself, as he did in Hulk, had done the face-mapping performance for the CGI puppet instead of Smith. Even money he did some of it. There's fascination in the conversation about why Lee is obsessed with this sort of Frankenstein pursuit and even some level of poignancy in connecting that impulse to create life from parts to the urge to create for any artist. Shelley's Frankenstein, after all, was originally credited to her husband and dissected as a patchwork o­­f various male poets' styles. She had written a story about a jigsaw man using jigsaw pieces of poesy. If only a real examination of the generally disastrous urge for men to biologically reproduce were the centre of Gemini Man rather than this awkward, solipsistic metaphor for the pain of getting older for a movie star. That's been done endlessly, and better (though less literal, The Rock's The Rundown, with its cameo from Arnold Schwarzenegger, is better)--and is too clearly a pretext for Lee to continue his field-testing of HFR. It's a proof of concept, not a feature; a high-concept, not a screenplay. It'll have a half-life, but for all the wrong reasons. There's your metaphor.