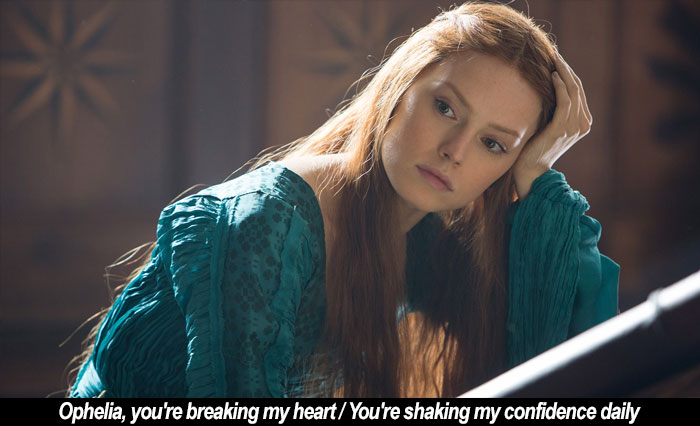 by Alice Stoehr A century ago, English animator Anson Dyer adapted Hamlet into a one-reel satirical cartoon. A couple of years later, Danish actress Asta Nielsen played her melancholy countryman, recontextualizing him as a woman. Since then, filmmakers have transposed the Bard's source material into the beer industry, the animal kingdom, and (on several occasions) the corporate boardroom. Film history, in other words, is full of revisionist precedent for Ophelia, which begins with its title character floating in a brook as she intones in voiceover, "You may think you know my story... It is high time I should tell you my story myself." Daisy Ridley--Rey of Star Wars fame--stars as this strong-willed young woman, done up like a Pre-Raphaelite painting with long red tresses. Quick with a turn of phrase, she registers unease in her hazel eyes and indignation in her jaw. Her Ophelia would rather go for a swim than attend to the queen, and the other ladies-in-waiting tease her for her coarseness. Screenwriter and "Mad Men" alum Semi Chellas, working from the 2006 YA novel by Lisa Klein, retells Hamlet's tragedy from the women's point of view. She begins decades before the play, with Polonius's arrival at Elsinore and his daughter's courtly education. The film builds into a Shakespearean Revenge of the Sith, depicting Hamlet's meet-cute with Ophelia, his growing rivalry with his uncle, and his rage when he learns of his father's death. At each turn, new twists reshape a familiar story.

Besides the elongated timeline, there's the omission of the dead king's ghost; the addition of Mechtild, who's both Gertrude's sister and a woodland witch; as well as a secret marriage for Hamlet and Ophelia, countered by Claudius with a wedding of his own. Each change makes Ophelia more central to the action. Now she's the one who reveals the regicide, whispering it to Hamlet during the nunnery scene just out of Claudius's earshot. When Hamlet yells at her, "Go to the nunnery. Go!"--the film abounds with such paraphrases of the original--his taunt has a very literal meaning. He's advising that she flee to a rural convent, where she'll be safe from the king's reprisals. Chellas and Australian director Claire McCarthy have drained Hamlet of its themes in order to turn Ophelia into an unambiguous heroine. The boldest bit of rewriting borrows a contrivance from Romeo and Juliet: As Ophelia helpfully tells Horatio when he digs up her grave, "I took a venom that mimics death but mocks it." She stays perfectly lucid and outlives everyone, making her story less about womanly anguish than retroactive wish fulfillment. The rest of the royal court, deprived of Shakespeare's diction, becomes flatter in the process. Clive Owen is a roguish Claudius with stringy, dark hair, bellowing not once but twice, "I am your king!" Naomi Watts fares a little better in the dual roles of the vain Gertrude, who starts to recognize her own complicity, and the haggard Mechtild. Rounding out the ensemble is George MacKay, a young Brit who pouts and seethes as the Prince of Denmark.

Despite its ostensibly radical departures from the text, Ophelia turns out to be a generic adaptation, bypassing instead of seizing upon the play's thorniness. It's not an unhandsome film, as far as period romances go. Denson Baker, McCarthy's husband and long-time collaborator, acquits himself well as cinematographer. The Czech hillsides that serve as Elsinore's surroundings match Ophelia's deep green dress, while apricot torchlight caresses Ridley's face inside the castle. The Murder of Gonzago's staging as an eerie shadow play is especially lovely. The framing meanwhile receives much less care and rarely goes beyond just keeping the actors visible onscreen, and the score, by Steven Price (Baby Driver, Gravity), is similarly indistinct, with little stings for Claudius and a sporadic choral chant quoting Hamlet's love letter: "Doubt thou the stars are fire; / Doubt that the sun doth move." Like Ophelia as a whole, this motif repurposes Shakespeare to no real end, as if the mere repurposing were the point. The film goes farther, but never deeper. The iconography of Ophelia with her madness, death, and beauty is tangled up in centuries of misogyny and female reclamation. While McCarthy's notion here, going back to the germ of Klein's book, may be a noble one, her rendering of Ophelia's story as this proactive fairy tale is reductive. It never dips below the surface of the brook.