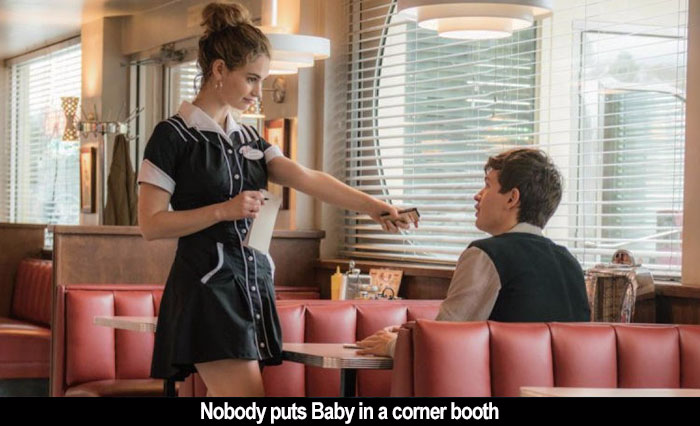 by Walter Chaw Edgar Wright is a good filmmaker and a better fan. The things he likes, he likes better than other people. It makes him the perfect choice for a zombie movie, a buddy movie, an Invasion of the Body Snatchers-type alien-invasion movie, even a videogame movie. What Edgar Wright doesn't appear to be is the type of Sidney Lumet/Walter Hill, gritty 1970s action-film auteur he'd probably like to be. With his new film, he's going for Report to the Commissioner but coming up with The Super Cops--and there's absolutely nothing wrong with that, except that straining for one impacts the effortlessness and unfiltered joy of the other. Baby Driver lands somewhere in the area of Peckinpah's The Getaway with its nasty rogue's gallery and Hill's The Driver with its enigmatic hero and his way with cars before sliding off the rails at the end, which feels like, of all things, the climax of Christine. Yet for a few effortless minutes at the beginning, it's something all its own, and it's delirious. It's the feeling you get when you first see Shaun of the Dead: like watching a favourite film for the first time again. I like that Wright loves all of these guys and their movies, but I wish he'd pick a lane. I admire his ambition and taste a great deal. But his far-ranging interests have made a disjointed mix-tape of this picture. It's the kind you make to impress instead of from the heart. For what it's worth, and it's not worth a lot, I just selfishly sort of wish he'd do more Cornetto films. How many flavours are there, anyway? At least seven, right? Let's get on that.

Baby (Ansel Elgort) is so quiet and attached to his iPod that various characters at various points ask if he's "retarded." No, says crime whisperer Doc (Kevin Spacey, his character's name perhaps a nod to the Steve McQueen character in The Getaway, or to Peckinpah's own favourite nickname)--Baby has tinnitus from the fatal accident that killed his parents long ago and therefore listens to music all the time to drown out the ringing. This sets the stage for something really cool in Baby being unable to function without music at all (except he is), or functioning differently according to the music playing in his head (except he doesn't). Alas, all it really does is offer an excuse for wall-to-wall song selections that are cool but ancillary. There's a great moment, if only the one, where Baby pauses in the middle of a heist to rewind his tune about 25 seconds--just to hit the right beat. I do love that Wright uses gunfire as diegetic percussion, too. Those are the bits that understand that all John Woo's gun fu was ever really about was transmogrifying the Hollywood Musical into ballets of carefully-choreographed bloodshed. Wright almost, almost does the version of "Cop Rock" that works. I don't know if he knows that's what he was trying for. My favourite bit in the movie is when Baby grooves down the street and the lyrics of the song he's listening to appear in the graffiti and signs around him. That's a Gene Kelly on a lamppost moment. It hovers right there on the verge of transformative. And then the movie blinks.

He's a great getaway driver, Baby. He drives different batches of bad guys, but mainly he drives Buddy (Jon Hamm), Buddy's wife Darling (Eiza González), and psychopath Bats (Jamie Foxx). Baby has a girlfriend, Debora (Lily James), who is a waitress at an all-night diner who happens to love the Queen of Memphis Soul, Carla Thomas, singing "Baby" to the delight of Baby, natch. I like when Baby asks what the song is, then runs to a record store that has it in its stacks. That takes me back. Baby is the primary caregiver of his foster dad, Joseph (CJ Jones), who's deaf and in a wheelchair. If you think that both Debora and Joseph will be imperilled before the night is through, you get the prize. Baby has been traumatized, Baby Driver theorizes. The title, by the way, is a track off the Simon & Garfunkel album "Bridge Over Troubled Water", and brother, are they ever. Troubled. The waters, I mean. But, aligning itself with the concurrent The Book of Henry, Baby Driver wants to take on the gravitas of child abuse without dealing with any of child abuse's consequences. Baby is a really great son, a really great boyfriend, and a champion of justice and order despite his avocation (which was forced on him in any case). He's an amazing driver, but we don't know how or why, unless Joseph is in his chair and deaf because of a training accident that Baby also feels badly about. Anyway, there's stuff about the last heist and paying dues and escaping into the desert but I didn't care. I also didn't care about the scenery-chewing bad guys with lethal tics or a final extended shootout that was better in Heat. You might.

You might also enjoy the car chases, done largely without the aid of CGI but shot so tight that it's hard to suss out geography save for one brilliant shot, spoiled by the trailers, where Baby manages to drift around a dumpster. That's cool. The rest of it is jumbled and pulled off better in each of the films to which Baby Driver pays homage. It's like a checklist of the great chases ticked off one by one to the delight of a geekdom that can't wait to whisper it to their captive companion. Baby Driver interrupts its freshest moments, in other words, with very capable--but very obvious--fawning. There's a fantasy sequence in which Baby imagines what life would be like on the road with his beloved, shot in sepia, that finds Debora dressed in 1950s American Graffiti innocence, and it plays more like fetishism than Romanticism. (Think Kelly Preston in Mischief.) When the film fails (when any piece of Wright's films falter, ultimately), it's because he's such a fan that he forgets to reconceptualize what he loves into something new and just represents it instead. It's frustrating, because Wright has the goods. Baby Driver is just good enough to highlight the many ways it could've been a masterpiece. I think Wright has another one in him. I think, appropriately, it'll probably involve a flavour of ice cream.