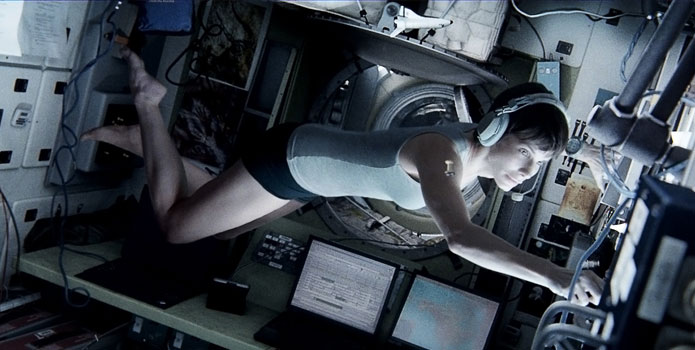 by Walter Chaw Alfonso Cuarón's eagerly-anticipated, already-buzzy follow-up to the tremendous Children of Men is Gravity--a title that doesn't reference the Ray Bradbury story "Kaleidoscope," to which the film owes at least a little credit (in addition to the premise and theme, Gravity also lifts the character name "Stone"), or any real meat at the heart of the story. It's not for lack of trying, as Cuarón and son/co-writer Jonás attempt, after the emotional tissue connecting the protags of Children of Men, to graft another lost-child drama onto a larger science-fiction conceit. What results is probably the most venue-dependant release of a year that includes Pacific Rim--if you can see it in IMAX 3D, you ought to: the biggest screen with the best sound. It's possibly the first film since Avatar that actually works with the extra dimension, despite having been converted in post-production; at times while screening Gravity at the Werner Herzog Theater in Telluride, I felt a bit vertiginous. It's an effect that no doubt had everything to do with the dual-projection and the custom-designed sound system by Meyers Sound. I talked to several techs from the company running around before the show, tweaking, testing, making sure that organs physically shifted during the presentation. My favourite story of the festival is how Cuarón, from the auditorium, instructed the booth to turn up the audio to just less than twice the "acceptable" volume.

It's a technophile's dream, in other words, an absolute stunner populated by types and suggestions of types. I should say "underpopulated." But much of that is by design--so much so that a short written by Jonas called Aningaaq was crafted to provide some contextual backstory for a key (and notably weak) section of the film. A shame it didn't play with Gravity proper (not being in 3-D, you see). Whatever the case, Gravity deals with the aftermath of a debris storm, Russkie-caused, that destroys an American space shuttle and mission to repair, again, the Hubble Telescope, thus shooting hotshot mission leader Kowalski (George Clooney) and civilian specialist Stone (Sandra Bullock) into the void. Their plan is to go to the International Space Station or, failing that, the Chinese station Tiangong (which is due to be completed around 2015, if you're creating a timeline for the movie in your mom's basement), secure an evacuation capsule, and return to Earth. The problem is that someone's running out of oxygen, someone else is running out of fuel, Stone's a total klutz, and Kowalski...well, let's just say Kowalski is too competent for his own good, and on his final mission, no less. Various contrivances conspire to shut our heroes off from "Houston" and any other human interaction, making Gravity surprisngly beholden to modern spam-in-a-cabin flicks that need a moment to explain why cell phones don't work while imperilling our attractive heroes in a situation created through their own desire for adventure.

So it's not a very good movie, but it is a really good spectacle. In the right place under the right conditions, it's the model of Summer entertainment, making it a shame that it's saddled with the greater expectations of Fall. There's no other way to explain Stone's Phoebe Cates chimney speech about her dead daughter (the one with the messy mop of hair), or the hero-shot at the end to run with an awards-show reel that will likely only play during the technical categories. Credit where credit is due, Gravity joins The Wolverine as key blockbusters this year with smart(ish, in this instance), powerful women at the centre of what is traditionally a cowboy genre. There is a single shot in the film, though, that suggests the full potential of what it could have, should have, been, given the talent involved and the untold riches and technological invention in play. It happens when one of the astronauts reaches a place of rest and, in Gravity's CGI weightlessness, falls asleep while gently rotating along a horizontal axis until coming to a stop in a perfect fetal position. It's heart-rending, truly breathless image-making, and it recalls in a moment the modern photographic installations of Children of Men. It reminds, in other words, that this bit of Hollywood boom-crash opera was made by a filmmaker, Cuarón, who's capable of even better.

Mike, you should admire the bravery of a film critic who gives "FvJ" a higher rating than standard establishment fodder, like "American Beauty". Even when I don't agree with Mr. Chaw, I contemplate that his reading on a particular film is most likely more intuitive than my own take. Not that he needs me to defend him, but that's why I never miss his reviews. He's one of the best in the business. ML