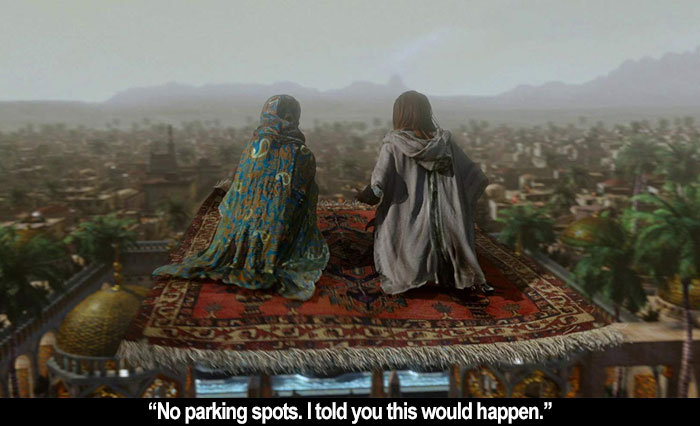 by Walter Chaw The elephant in the room vis-à-vis Guy Ritchie's new, live-ish action Aladdin is the recasting of the all-powerful Genie with Will Smith after the untimely death of role-originator Robin Williams. Whatever their relative comedic talents, the figure of the Genie is one of essential servility: an almighty being nonetheless bound to the whims of whoever possesses his lamp. Street urchin Aladdin (Mena Massoud) acquires said magical lamp and promises the Genie he'll use one of his three wishes to set the genie free from eternal servitude--a promise Aladdin almost reneges on once he spends some time enjoying the pleasures of omnipotence and the attentions of comely Princess Jasmine (Naomi Scott). The elephant in the room is that Will Smith is black--and casting a black man as a slave, in a Disney movie, no less, is fraught, almost impossibly so. I mean, The Toy-fraught. The tangle of implications this casting raises drowns out nearly every other consideration. Lest there be any nuance to the situation, in their very first interaction Genie tells Aladdin that Aladdin is his "master." The rest of the film is essentially Genie helping Aladdin, Hitch-style, woo a pretty girl while hoping that once that's over and done with, the Genie himself will be enslaved no more. When Genie's eventually freed, his shackles fall off his arms, he shrinks, he loses his blue pigment in favour of Smith's natural complexion, and he puts the moves on handmaiden Dalia (Nasim Pedrad), who's been wanting to bang Genie for the entirety of her existence in the movie. It has an unbelievable amount of emotional weight--more than anything the film itself has earned through its narrative.

I love Will Smith, genuinely. As a producer, his films feature miscegenation in ways so consistent it can't be an accident. Even in Aladdin, Genie's destiny is a relationship with a white-appearing woman who wants to have children. For Smith to not "hear" the problem implicit in his casting as a slave is astonishing, especially given his famous rejection of Quentin Tarantino's Django Unchained for not foregrounding the slave experience. I think Django Unchained is a fascinating, loaded picture that deals with the legacy of black-on-black violence from slavery through to the modern diaspora, but I found Smith's decision to turn it down to be principled and reasonable. Yet, here he is, just a film removed from jabbing at "Black Lives Matter" with a throwaway joke made in bad taste in Bright, playing a literal "super-duper magical Negro" (™ Spike Lee, who coined the term partly on the basis of Smith's own The Legend of Bagger Vance). Smith is an extremely powerful player in Hollywood--along with Denzel Washington, arguably one of two African-Americans with the kind of clout to get something made on the basis of his name alone. He is broadly beloved. History will ultimately unpack what to make of these moments where his choices are appalling. I think it's interesting that Genie loses his powers when he becomes black. Interesting in the same way as how blonde hair is magical in Tangled, but not brunette.

The previous incarnation of Aladdin, the one I saw on opening night in 1992, had as its opening the "Arabian Nights" number with the lyric about cutting off ears to spite faces ("It's barbaric, but hey, it's home!") and included a panoply of disastrous racial and cultural stereotypes. For the home-video release, Disney agreed to elide the ear-cutting line from that Ashman/Menken song, but not a lot could be done with the caricatured Middle-Eastern villains or the Westernized, Middle-Eastern-esque, American-accented heroes. It's worth noting that while Disney agreed to remove the ear-cutting bit, they refused to alter "barbaric" as a descriptor for the Middle East despite the protestations of the American-Arab Anti-Discrimination Committee. The version for Ritchie's live-action run goes farther in retconning its racism by erring on the side of a Casablanca bazaar feel. Here are the three stages of...call it "progress." From this, in 1992:

Where they cut off your ear if they don't like your face,
It's barbaric, but hey, it's home

Where it's flat and immense and the heat is intense,
It's barbaric, but hey, it's home

Where you wander among every culture and tongue,
It's chaotic, but hey, it's home

An improvement (no ear-cutting, no "barbaric"), but one that also suggests a sop or a half-measure. In reality, whatever steps this Aladdin has made to get on the right side of history it undermines with thoughtless execution. What, after all, is "chaotic" about multicultural/lingual societies that necessitates this self-deprecating disclaimer? It doesn't take a Howard Ashman to come up with something that celebrates diversity--"It's chaotic, I love it, it's home"--rather than expressing some sort of indistinct embarrassment of it. I'm picking at this minutiae because it's as good a thread as any to unravel the film's manifold miscalculations.

A new song, "Speechless," poses itself as the new feminist anthem. It's performed by the daughter of a dotty Sultan (Navid Negahban), Princess Jasmine, who's besotted by neighbourhood Rasputin, Jafar (Marwan Kenzari), as well as the object hero Aladdin wishes to win through deception and keen song-and-dance routines. (If you're wondering whether it's problematic to have Will Smith teach the hopelessly bland Massoud how to dance, Fresh Prince-style, you're asking all the right questions.) Written by the guys behind La La Land's unmemorable songs (Benj Pasek and Justin Paul), "Speechless" is one of two major changes made to the Disney animated film to provide Jasmine with more agency: First, she'll reject being silenced with a song that borrows from '80s supergroup one-hit wonder Mr. Mister; then, as a final gesture from a broken man, the Sultan will declare that Jasmine is the new Sultan and thus able to change a law in their kingdom that says she must marry royalty. The Sultan passing on his Sultanate in this way suggests a gross abuse of power that's underscored by a framing story in which the once all-powerful Genie has decided he'll spend the rest of his (mortal?) life as a humble fisherman scolding his children for coveting another man's yacht. (If you think it's also problematic to have an all-powerful black man decline to redress embedded social inequality, and in fact lecture about the nobility of poverty, again, you're not the target audience for this film.) Why the Sultan can't change the law himself isn't as important as this Thor-to-Valkyrie gesture, which plays exactly like what it is: an awkward band-aid applied to increasing bleed-out for better gender representation in mainstream product. Whatever the good intentions behind it, it's troll food, alas, that feels like a late rewrite suggested by fear, and it ignores any number of problematic issues it raises. Aladdin isn't now a feminist picture--it's a slave-owner fantasy with a literal super-duper magical Negro. It's Donald Trump handing his kleptocracy over to Ivanka. It's The Green Mile with a blue black guy, and the last thing you should do when dealing with trolls is to offer them low-hanging fruit.

Ultimately, this live-action Aladdin will make the money it makes on the backs of desperate parents seeking air conditioning and counter-programming to John Wick 3 as Memorial Day inaugurates another summer movie season. Disney's practice of live-actioning their billion-dollar IPs to catch the generation that grew up on their animated classics (and the generation that generation spawned) is a cynical though not completely hopeless idea when carried off with true if accidental existential horror, as in Christopher Robin, or Tim Burton's deliriously deranged Dumbo--but it's a horror show when applied to the cultural-appropriating garbage for which Disney's already taken decades of heat. The problem immediately with something as stylized as Aladdin is that what was an uncomfortable caricature of Arabs for Arab-Americans in 1992 is still an uncomfortable caricature in 2019 but now features humans in costumes and bigger stakes, such as an administration that would like very much to ban every Muslim from any country not currently buying weapons and bad debt from them. This Aladdin is more a spiritual sequel to the outrageously offensive Sex and the City 2 than a true remake of the animated original, with ossified colonial attitudes and arrogance combining to distil centuries of Middle-Eastern culture down to diaphanous wall hangings, flying carpets, and flowy robes. Oh, and they hate women. I'm on the edge of my seat to see what they do to Mulan in updating it to offend me less. No Chinese people on the production side of that one (just like there are no Arabs on the production side of Aladdin and at least a few brownface extras among the cast), but at least Mulan director Niki Caro is a woman, right? Aladdin oscillates madly between lock-step recitation of the animated film without the cartoon's vivacity and a tone-deaf cabal of social issues presented with a disturbingly straight face. It's just a kid's movie, though. Indoctrinate them early. Open sesame, bruh. Updated: May 28, 2019.