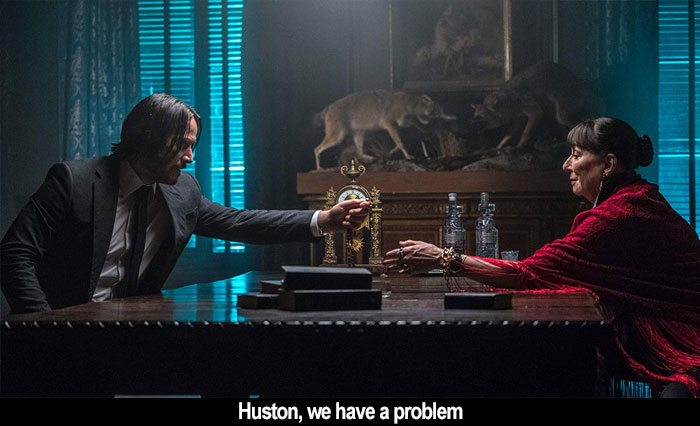 by Walter Chaw As the novelty wanes and the universe expands, the John Wick franchise becomes less fleet, though its pleasures, when they arrive, have lost little of their joy. I think of these films, three of them now, as describing the arc of the great Hollywood Musical actors, the Fred Astaires and Gene Kellys, the Liza Minellis and Ginger Rogers and Judy Garlands, who would enliven whatever inanimate book in which they were mired with their irrepressible stagecraft and charisma whenever the spotlight caught them. John Wick: Chapter 3 - Parabellum (hereafter John Wick 3), in other words, is a slog of mythology linking galvanizing action sequences that are meticulously choreographed, unapologetically brutal, and graceful in every way the picture's story and dialogue are not. They're so good, really, that it hardly matters what the movie's about--so good that it's fair to wonder why they're working so hard at trying to pull coherence out of this premise instead of just offering vague excuses to arm the graceful, lanky, morose hero and drop him in the middle of bad situations. I mean, do they know it's not necessary? Is the world-building mumbo-jumbo a meta-joke on a media landscape now dominated by three or four dynastic storylines?

For the uninitiated, John Wick (Keanu Reeves) is a remorseless killing machine existing in a Parallax View reality where assassins operate under a strict code governed by a shadowy "High Table" of puppet masters. There are safe havens in this world masquerading as four-star hotels--the New York one that Wick favours, the Continental, presided over by magisterial Winston (Ian McShane) and at contretemps with an underground network of homeless people led by the "Bowery King" (Laurence Fishburne). At the end of the previous film, Wick committed a cardinal sin and the organization elected to excommunicate him from the protection of their arcane rules and boundaries. As the second sequel opens, Wick is at T-minus twenty minutes until his exile officially takes effect, leading to a charming sequence where he hires a doctor (Randall Duk Kim) to patch him up while both of them count down to the second he has to stop stitching. The idea of Wick being denied the privileges of his position are a lot like those times when James Bond is stripped of his 007 designation, or when the Impossible Missions team members are turned into ghosts. What happens when heroes who rely on gadgets lose their access to them? Worry not, as Wick finds America filthy with guns just sort of lying around, waiting to kill children. He also takes this opportunity to weaponize horses and, in the film's centrepiece, gains the brief confederacy of former colleague Sofia (Halle Berry), who, besides being deadly in her own right, has trained a pair of awesome dogs to sic balls.

The stuff that isn't top-grade action is first-rate gobbledygook. Lost is the elegance of a sad guy avenging his dead puppy, replaced by mythology concerning promises and oaths and specially-minted coins and Dungeons & Dragons life-counters with secret compartments you can open with a bloody thumbprint. Wick calls in favours, reveals he grew up as a ballet dancer under the harsh eye of The Director (Anjelica Huston), and ends up looking for a cleric in the Casablanca desert because reasons, man, deep reasons. With only a book, Wick kills 76ers backup center Boban Marjanovic, who has a Richard Kiel quality about him I found to be wonderfully nostalgic. Wick eyeball-kills someone else, uses another person's arm to flip a motorcycle, wields a shotgun with a sort of concussive glee, and generally does the things we hope he will do. Director Chad Stahelski shoots and edits it all with staggering clarity. It's a former stunt man honouring the craft--there's never any confusion over stakes or geography.

Indeed, there's nothing not to like about the action sequences. Consider the shootout through Moroccan ruins, with Sofia and her attack dogs adding savage punctuation to a slick gunfight. It's awesome. Even better, Sofia is allowed to be the prime mover in this sequence while Wick lingers in the background, and her fighting mien is something of a departure for these films: fearsome, angry. While nothing tops the stylishness or satisfaction of the original's nightclub set-piece, these few minutes come close. John Wick 3 only falters when it dives into its lore. Lore is wonderful when it's hinted at, less so when it's asked to carry much of a narrative load. Wick is driven in this one to get his excommunicado status revoked, but as he seems indestructible, it's not clear what the stakes are for him. He imperils those who would help him, yet bristles when he's used as a tool in the end: use as a tool the precise fate he'd hope to win. There's an "Adjudicator" played by Asia Kate Dillon, who approximates icy well while doling out dire judgments on behalf of the High Table--pity they aren't given much to work with beyond a soulless-administrator archetype. Better is arch-villain Zero (Mark Dacascos), who comes off more like a fan of Wick hoping to be pals with him than like his fearsome adversary. It's a choice that deflates the potential stereotype of another Asian master defeated by a pretty white guy in an American action flick, and it demonstrates, along with Sofia's foregrounding, a gratifying grasp of how representation looks when characters are written with respect to their humanity rather than just their ethnicity. John Wick 3 ends on a cliffhanger for another chapter it will almost certainly earn; the danger going forward is that these films drown in their own bureaucratic mysticism. Three movies in, they remain the best argument that Americans still have a voice in the action game. They still feel fresh, but for how much longer it's hard to say.