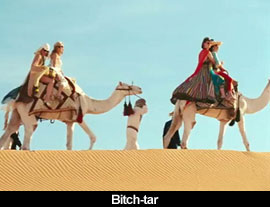 by Walter Chaw One may be a misguided liberal screed and the other a misguided conservative screed, but Sex and the City 2 and Prince of Persia: The Sands of Time (hereafter Prince of Persia) are very much alike in that they're what a Tea Party meeting would look like with a budget. They're politically-confused hodgepodges of bad ideas and misplaced, incoherent outrage--most of it gleaned from the one or two times some idiot accidentally read the A-section of a newspaper, the rest gathered from Dummies primers on how to be cursorily informed in the Information Age. They're similarly infused with healthy doses of arrogance and cultural empiricism that speak directly to the reasons the United States is the target of fundamentalist whackos convinced we're all just like the randy quartet of aging bitches on a hedonism bender in the Middle East in Sex and the City 2. Hateful, vile, both films are also indicated by a distinct lack of artistry, representing a world post-Michael Bay in which a goodly portion of movies are dependent on not only other cultural touchstones (a TV series, a videogame) for the entirety of their alleged appeal, but on some of the most vapid cultural touchstones in the brief history of our popular culture, period.

Start with Michael Patrick King's foul Sex and the City 2, which exists in the same parallel universe as Tyler Perry's empire in admitting only the specifically inculcated and leaving the rest of us to watch this swill with head cocked in dog-hearing-a-new-noise fascination. The newcomer will discover in it four shrill harridans no one bothers to flesh out--leaving that to the previous fifteen years of the franchise's existence--doing their best to suck every cent out of every pussy-whipped sugar daddy unfortunate enough to shove his Mr. Big through the wrong glory hole. Without a pre-existing relationship with these characters, Carrie (Sarah Jessica Parker), Miranda (Cynthia Nixon), Samantha (Kim Cattrall), and Charlotte (Kristin Davis) come off as absolutely insufferable representations of everything that's wrong with human beings. It's not Warhol's soup can, it's the condensed soup itself: simultaneously salty and bland, watered down, commodified, and no one's idea of a nutritious meal. Carrie is married to Big (a zombified Chris Noth) and the loathsome Charlotte has a Chinese toddler (presumably for the reaction shots) as well as a big-titted Irish nanny (Alice Eve) our heroes label "Erin-go-braless" and hate because she's younger, prettier, and smarter than them, but at least she's a lesbian. Thus the film has the distinction of not having the decency to provide a coherent worldview, hating women mightily while espousing an "I am woman, hear me roar" ethos that reaches its nadir in a hideous scene wherein it's revealed that the oppressed women of the Middle East are really hoping for a catwalk on which to strut their Paris fashions. Fuck you.

And fuck you, too, United Arab Emirates, as our motley crew become the guests of a billionaire oil sheik in a $22k/night Abu Dhabi hotel suite complete with matching cars, chauffeurs, and butlers. ("Abu Dhabi Doo!" squeals pinched cheated-on wife Miranda in one of the film's smarter moments.) Carrie opines sagely about the weirdness of a woman having to eat French fries from behind a veil before Samantha trolls for cock and declares that she's found her "Lawrence of my labia." This gets her arrested, of course, in time for lawyer Miranda to happily agree to the confiscation of Samantha's passport (that's some good lawyering there, honey), and during the ensuing interrogation, a condom falls out of said passport. Sex and the City 2 is a celebration of slutty, bimbo behaviour no more palatable for the regular intervals of our foursome pretending to have non-reptilian reactions and Carrie sleazing "Doogie Howser" homilies into a Dictaphone from some point in the future. The clincher is when Samantha in hot pants, in the middle of a menopausal hot flash, flips off a crowd of Arab men and declares her right as a fucking harlot to screw her cunt into a knot. (I love, meanwhile, that Carrie has a Susan Sontag book on her shelf. If this is feminism, I'm all for it.) On the lam now from the clearly backwards Muslims, the enlightened materialist flesh merchants are led to safety by a cabal of Muslim women who divulge that, beneath their plain garb, they're decked out in high-fashion duds. See, but, the implication isn't that dresses equal women's liberation--it's that women are the same fatuous, shallow, status-grubbing nincompoops the world over. Even better is a moment where Miranda and Charlotte toast all the women out there who somehow raise children without the aid of a fulltime, live-in nanny. When Marie Antoinette did this, the people tore down the fucking Bastille. When our "Sex and the City" girls do it, they slurp it up like box rosé and Häagen-Dazs.

At least Sex and the City 2 inoculated me to the shock of Prince of Persia, otherwise it might have been enough for me to swear off movies altogether. Therein, find Persian actor Jake Gyllenhaal affecting a Bert-the-Chimney-Sweep accent as pauper-prince Dastan, who plunders a sand-filled dagger in a mystical city ruled by buck-toothed Princess Tamina (Gemma Arterton, reprising her role from Clash of the Titans already and making a good case for her being packed in a tube and shot into space). Seems the dagger contains the titular sands of time that allow the holder to turn back the clock a minute and therefore prevent shit that's just happened from happening again. (Yes, it's based on a pretty good videogame and, yes, it's also a lot like that moron Timur Bekmambetov's Day Watch.) Evil Uncle Nizam (Ben Kingsley) wants the dagger so that he can be king instead of his brother, who's conspicuously a lot whiter-looking than Nizam. If you're like me, mainly you're noticing that the film is about the sacking of a city on the pretense that they're hiding some kind of weapon when, in truth, the real treasure is an invaluable pool of something or other buried beneath the city. Yes, it's an Iraq war parable set in Iran, essentially, making it confused geographically and naïve politically. Muddying the waters further, enter Amar (Alfred Molina): a Sallah figure, he hates the tax-and-spend Persians and imagines a marketplace utopia whereby like-minded assholes decry socialism as a term they don't really understand. And race ostriches.

It's dumb as a bag of hammers, but that doesn't begin to suggest exactly how poor is the picture's writing and how ill-equipped is Gyllenhaal at being British, Persian, an action hero, or having a pulse. When Prince and Princess sit in a tiny tent during a sandstorm, meeting hands as they're stroking his horse, well, who's to say it's not the single most awful romantic moment/euphemism in the history of film? It's bad enough to almost forgive Mandingo sidekick Sesso (Steve Toussaint), who twice declares "nice knife" before heroically sacrificing himself for all the white people in the movie congratulating themselves on being the best stewards of Persia. You could say that it's harmless, escapist fun for stupid people, but I do wonder how a movie produced in Iran with an all-Persian cast about, oh, the signing of the Declaration of Independence would play in Providence? (How 'bout our housewives opening their housecoats to proudly display burkas underneath?) But engaging in serious conversation is beside the point when it comes to either experience (Sex and the City 2 or Prince of Persia), because thinking during these pictures, not unlike attending certain political rallies, is strongly discouraged, if not outright forbidden. Better to focus on how Sex and the City 2 is utterly bereft of any non-fanatic value and how the action scenes in Prince of Persia are uniquely unenthralling. (It's every bit the unexpected sequel to Gymkata that no one desired, with Prince Dastan flipping around on fortunate parallel bars in a backlot Middle East.) Of the two, however, only Sex and the City 2 actually condescends to even its audience of true believers--which, though unforgivable, will surely be forgiven all the same. Originally published: May 27, 2010.

THE BLU-RAY DISC - PRINCE OF PERSIA
by Bill Chambers Touchstone brings Prince of Persia: The Sands of Time to Blu-ray in a 2.40:1, 1080p transfer that's fairly typical for a recent-vintage film on the format. The movie was dusted gold by the digital colour timers but the grain structure has been preserved, giving the image some kind of organic base. Contrast maintains remarkable dynamic range, as demonstrated in an early passage where the King's face is silhouetted but his expressions remain legible. The D-BOX-enhanced 5.1 DTS-HD MA track robustly renders a full-bodied, full-blooded summer-movie mix (and Harry Gregson-Williams's score is one of the more bass-rich in recent memory), though a word of warning that Jake Gyllenhaal's dialogue sounds redubbed more often than not--probably because it is.

In all my years of reviewing Blu-rays, this was my first opportunity to access BonusView (here "CineExplore") features--and "The Sands of Time" epitomizes what I was dreading from the application: twenty hollow HD mini-docs (known as "rewinds") of 1-3 minutes apiece, access to which is granted at the start of assigned chapters throughout the film via a clickable dagger icon. (You can also browse an index of them that keeps track of which ones you've watched.) Sample title? "It Was Hot! Hot! Hot!" Gyllenhaal, Gemma Arterton, and schlockmeister Jerry Bruckheimer are obligatorily feted; the production design receives a cursory glance (and looks comparatively lush in sketches and B-roll); and "Fred" Molina reveals that his tender stroking of the ostrich's neck was a bit of improv that could've gone horribly wrong. Also on board is a deleted scene, "The Banquet: Garsiv Presents Heads" (2 mins., HD), that I'm going to assume was removed because decapitation and PG-13 don't mix--no official explanation is provided. Closing out the platter is a Sneak Peeks block containing promos for Disney Movie Rewards, anti-piracy (featuring CGI Tinkerbell), Disney Parks, The Sorcerer's Apprentice, A Christmas Carol, Fantasia/Fantasia 2000, Beverly Hills Chihuahua 2, The Lion King Diamond Edition, Disney Blu-rays, Tron Legacy, and Toy Story 3. The abovelinked 3-disc combo package includes the retail DVD plus a Digital Copy of Prince of Persia. Originally published: October 4, 2010.