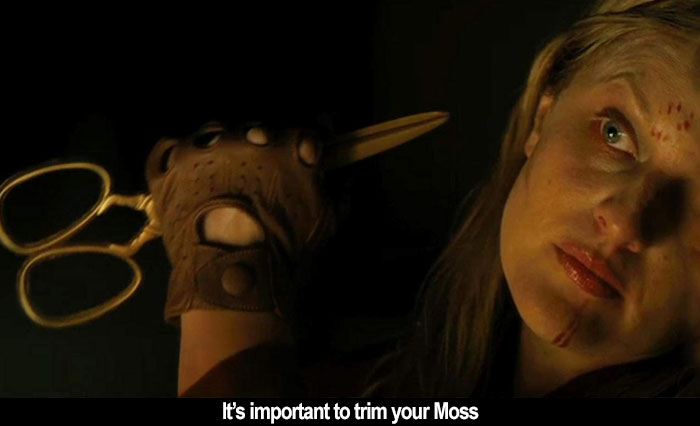 by Walter Chaw SPOILER WARNING IN EFFECT. Get Out was an instant classic that appeared at the spearhead of a new blaxploitation movement. It introduced terms and concepts into the lexicon ("Now you're in the sunken place"). It attacked race relations with intelligence and, save one tonal slip at the end, maintained an almost unbearable tension throughout. Its signature image of a black face, frozen in terror, the path of a single tear tracing its way down one cheek--you see it three times, on three different characters in the film--encapsulates the black experience: outrage held forever in abeyance, voices stolen by the ruling culture, along with lives and potential lives. Get Out won its writer-director Jordan Peele accolades and the type of laurels (the next Spielberg!, the next Hitchcock!) that, the last time they were handed out (to one M. Night Shyamalan), did the recipient no real favours. And where Get Out asked the question of what Peele's limits were, Us answers it immediately--and decisively enough that it feels almost cruel. Us has a couple of vaguely interesting ideas it fails to develop, a few set-pieces it fails to pay off, and a central metaphor--literal upper and lower classes being tethered together along some socially-engineered psychic conduit--that it has no real idea what to do with. The two choices for any conversation about Us, then, are to continue treating Peele like a holy, anointed savant/prophet until he makes The Happening (to the extent that Us is not already The Happening, let's face it), or to say that Us is at best disappointing and at worst just plain bad.

Adelaide (Madison Curry) is about nine. It's 1986, and her dad wins her a "Thriller" T-shirt at the boardwalk carnival in Santa Cruz, California. (Say this about Peele: his zeitgeist timing remains on point.) She wanders off. Rain appears out of nowhere. In a Native American knock-off attraction promising to reveal a round-eye's true spirit self, Adelaide encounters her doppelgänger. Now it's...is it the present? Adelaide is played by Lupita Nyong'o, who would have been three years old in 1986, as a nervous but loving and loved wife and mother to hulking goofball husband Gabe (Winston Duke) and their children, screen-addicted teen Zora (Shahadi Wright Joseph) and weird little Jason (Evan Alex). This family, the Wilsons, go on vacation to Santa Cruz for some reason, causing Adelaide a lot of obvious and unnecessary anxiety. There's no real good reason for them to be there unless it's to spend time with their white friends, the broad-stroked Tylers, whom they hate: pink-wine-slugging, botox-getting shrew Kitty (Elisabeth Moss); her useless, drunken frat-boy of a husband, Josh (Tim Heidecker); and their hell-twins, Becca and Lindsey (Cali and Noelle Sheldon).

When Adelaide's doppelgänger reappears, this time with an entire doppelgänger family in tow, Gabe bemoans the existence of a hide-a-key as something a white person would think of. It's a curious remark, not because it's sort of misdirected race humour, but because if the lore of this film is that the doppelgängers essentially know what their doubles know, then Gabe would have known there was a hide-a-key, or else how would his doppelgänger (called "Abraham") know? Sloppy. Thematically, though, the only on-screen kills that get any kind of reaction in the film are the vicious murders of the white folks--especially the vapid twins, who are developed as bikinis with nothing nice to say. Revenge for an endless legacy of black bodies destroyed for white pleasure? I guess. But it feels ugly and cheap in a specific way that the murders in Get Out do not. It's not cathartic to make a joke of a black family using a dead white girl as a coffee table, it's just low.

Nor is it thinking deeply to suggest that the Reagan era's attempts at unity in empty spectacles like "Hands Across America" and "We Are the World" could be couched as social engineering experiments designed to get people to overlook actual issues threatening our sense of national identity. The film opens with a CRT television playing the "Hands Across America" ad, flanked by VHS tapes of The Goonies, C.H.U.D., and The Right Stuff. This is Peele showing his hand after a three-sentence chyron has already done essentially that: It seems the United States is riddled with mysterious underground passages, and these passages are home to "the Tethered," clones who mirror what their surface-dwelling twins do so that governmental puppet masters can control their behaviour or something. Except that there are no puppet masters save Adelaide's "tethered" clone Red, a kind of Chosen One for these screeching automatons who wants to lead them into the light of some childish, H.G. Wellesian revolutionary spectacle. Is Us saying that protest is empty imitation of soulless ideologies? Or just that the demonstrations in the 1980s were? Is it saying that protests organized by the proletariat are as hollow as the ones arranged by the bourgeoisie? Ultimately, why do the evil clones even have to kill their primes to re-enact Hands Across America?

What's most disappointing about Us is that there really aren't any new ideas in it or any original approaches to the old ones. The things it calls back to, that it doesn't identify itself, are obvious--and the execution of the new ideas, such as how the doubles screech like '50s-movie pterodactyls rather than talk, kills any threat that these things could ever take the place, Invasion of the Body Snatchers-like, of their twins. The children imperilled and murdered are notably under-developed, and Us is interested in emasculating the husband to a degree that comes dangerously close to trafficking in other stereotypes. Then there's its frequent citation of Jeremiah 11:11:

Therefore thus saith the Lord, Behold, I will bring evil upon them, which they shall not be able to escape; and though they shall cry unto me, I will not hearken unto them.

That chapter and verse are referenced repeatedly throughout the film, as much for the apocalyptic message, I think, as for the visual doubling of 11:11. Honestly, Us is so scattershot and confused, I'm not sure the quote represents anything beyond its chapter/verse doubling. The interesting version of Us is the one where all the white families who have everything and are completely insufferable and privileged are tethered to the toil of the black folks relegated to eternal, parallel torment in the underneath. I feel like Us started out this way until cooler heads prevailed. The picture's saving grace is in the performance of its female leads: Nyong'o has the lithe action-hero muscularity of Jada Pinkett in Tales from the Crypt: Demon Knight to go with her acting chops, and she creates a complex, three-dimensional pair of characters. Adelaide is a heartbreaking portrait of a mother doing her best while battling demons; the decision to voice Red like an asthmatic Elizabeth Holmes is not a great one, but Nyong'o makes it work eventually, too. There's a scene in which Red forces Adelaide to don shackles that is incredibly loaded. It's about to lead to Red cutting Adelaide's beautiful hair, but then Peele interrupts it with some badly-framed, dimly-lit action. Until then, it's the second best scene in the film. The best finds Moss's Kitty admiring herself in a makeup mirror for a really long time and conveying, in the process, the attraction/revulsion of this person losing her grip on the one thing that represents her value to herself. Imagine the movie where Nyong'o is Moss's shadow--and she wants to be free.

But the rest of it--oh, the rest of it. The mean slapstick assassinations of the insufferable white folks. The poorly- set and executed boat-motor thing. The bit with the Peter Pan scissors that the filmmakers nearly pay off with talk of shadows but don't, so the scissors mean nothing. (And how did they get so many of them from the underground?) The long exposition where a deus ex flashback is introduced while the monologist literally stands in front of a blackboard. Note a moment that takes place next to an ambulance where dad makes a comment and, against all logic and dramatic context, the teen daughter rolls her eyes at him. Look, it's all pretty bad, especially the thing I can't tell you about but that you will have already figured out if you've seen any movies, which destroys whatever's left of the lore at that point. What we're left with at the end of Us is Peele the enigma: the guy who hit it right out the park his first time at bat, then took a comically bad swing the next time through the rotation. Give him credit for aiming for the fences, I guess. Let's see what he does with the next pitch.