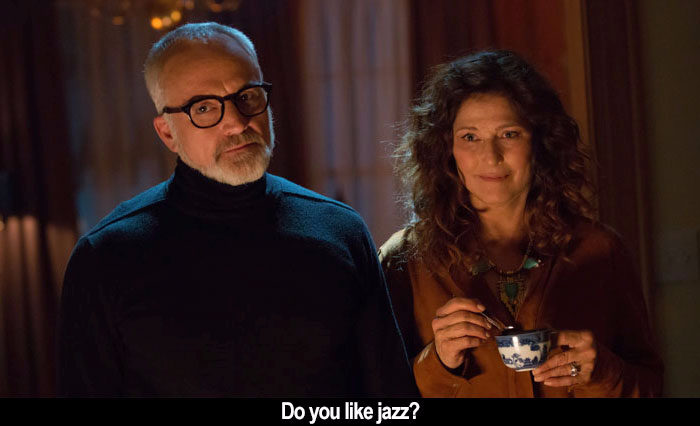 by Walter Chaw It's the easiest thing in the world to make a movie about bigots; it's a lot harder to make a movie about liberals who mean well, but are feckless elites who not only don't make things better, they actually, through their platitudes and paternalistic attitudes, make things worse. It's about money. If anything has been confirmed beyond a shadow of a doubt, it's that everything's about money. The villains of Jordan Peele's directorial debut Get Out aren't white people--they're rich white people. (Its closest analogue is Brian Yuzna's Society.) A movie about white privilege, it's a comedian's film in that, like the best comedians, it recognizes some awkward truisms and makes them manifest in a situation that builds on itself. This is a great set. It gets on a roll. Its central riff is a complicated one: rich white liberals are so detached and alien that through their best intentions, they're actively responsible for the continued oppression of minorities in the United States. There was a string of films in 2016 that raised this as a possibility (I Am Not Your Negro and OJ: Made in America high among them), but in Get Out the idea has found its natural home in the horror genre. The bookend to Romero's Night of the Living Dead, it even shares the same set-up for a radical "down" ending. The decision Get Out makes at that terminal crossroads says everything. It's a challenge to the audience to check their own attitudes about how black men are demonized in our culture: abusers of white women, sexually threatening to white men, and murderers of both; angry and bestial.

The conundrum in these attitudes, though, is that black men are also celebrated for their physicality. The traits of aggression attributed to them are exploited by professional sports. What Get Out handles in its brief runtime and B-movie machinations is no less than the weight of all this dyed-in-the-wool American racial disaster. This shit's ingrained, there's no fixing it. At least not without having a conversation to understand it. To be fair, even Merrin couldn't exorcise Pazuzu without naming him first. Get Out sees gifted photographer Chris (Daniel Kaluuya) and his white girlfriend Rose (Allison Williams) going home to meet her parents, Missy (Catherine Keener) and Dean (Bradley Whitford), on their remote Alabama estate, the former site of a plantation. She hasn't told them that Chris is black. Dean says "my man," puts his arm around Chris, and shows him a picture of Dean's dad, a sprinter who lost a spot on the 1936 Olympic team to one Jesse Owens. "He almost got over it," Dean laughs. Chris doesn't laugh. The first hour of the film is a masterclass in observational humour. It's as tense as piano wire. Missy and Dean have a party and all the wealthy white guests come by to tell Chris every story they know about black people to put Chris at ease in the keenest, sharpest observation of how rich white liberals treat minorities I've ever seen. Meanwhile, the black maid, Georgina (Betty Gabriel), and black groundskeeper, Walter (Marcus Henderson), smile a bit too broadly and appear, now and again, to be trying to say something they can't quite bring themselves to say.

The MacGuffin here is something called "Coagula." It doesn't matter what it directly refers to, it's a term used in alchemy to describe dissolution and coagulation. It was also the name of a transsexual member of "Doom Patrol." To my mind, the term evokes the blaxploitation antihero Blacula, a figure who commits suicide to spare himself the pain of losing the same lover twice. There's an interesting romantic arc in Get Out between Chris and Rose. Their chemistry is real. A scene by a dock where Chris expresses his feelings for her, and Rose for him, is the most effective of its kind since similar moments in the great Beyond the Lights. Get Out works the way it does because of its emotional purity. Chris's discomfort is real; Rose's chagrin with the way her family is behaving is real. For his part, Peele locates the unctuousness in Whitford's persona, so that his opening banter to put Chris at ease feels like an assault. He finds, too, the brittle menace beneath Keener's maternal surface, focusing it, brilliantly, on the teacup she's always carrying around with her, the artifact of office for her place in this social hierarchy. Throughout the first hour, Get Out carries on a withering, essential illustration of the inextricable calamity of race in the United States. I've been to these parties. I've had these conversations. Everyone means well. Everyone's trying to make me comfortable in their midst. Right at the point shit starts getting real, some Asian guy asks Chris about his experience as an African-American man in these United States. Now Chris laughs.

What keeps Get Out from attaining the critical mass it more than earns is the insertion of a pressure valve in the form of Chris's buddy, Rod (Lil Rel Howery). Rod is comic relief of a sort that, curiously, relies on certain racial caricatures popularized by black sidekick characters. His are the cheap laughs, contrasted against the uncomfortable laughs embedded in the picture's premise. It's useful for the conversation in that I have a hard time believing Peele isn't aware of this, but it damages the film's admirable tension at key points in the narrative. Ditto Caleb Landry Jones in a smaller role as Rose's brother Jeremy: he's a mere sketch in a movie indicated by the richness of its portrayals. These are quibbles--the larger issue is that Get Out is a landmark film in many ways that will make no difference whatsoever. It won't solve racism. It won't change a mind. It will be seen as provocation by the people who need to see it, should they see it, and it is only affirmation--if particularly trenchant affirmation--of the experience of the people for whom it's meant. But for me, it's valuable, if only because it's helped clarify in my mind that the minority experience is not a unique one. The bigots on the one side are easy to identify and dismiss for their ignorance and fear, yet the real threat is potentially from allies who seek to be your champions despite being no less ignorant or fearful for their trappings of education and wealth. Though there's little denying that Trump's affection for the uneducated is not in vain, it's compelling to consider that the liberal elite's complete inability to relate to the same had something to do with the fall of our empire. Get Out speaks this in its images and its dialogue. As a film, it's fine. As politics, it's a fantastic metaphor for our literal house on fire.