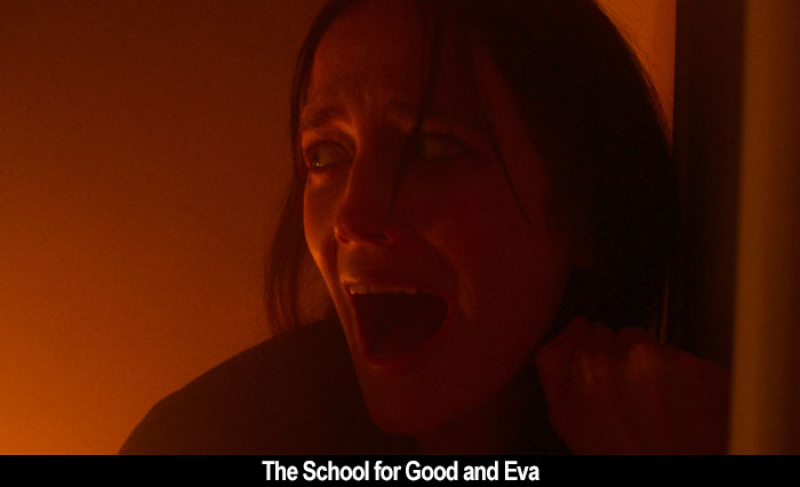 by Walter Chaw Lorcan Finnegan's Nocebo would fill an interesting double-bill with Jaume Collet-Serra's Black Adam, both violently rejecting the interventionist and exploitative tenets of colonialism (traditional and neo-). The reasons these films at opposite ends of the production spectrum might manifest within days of each other in 2022 are cynically self-evident, perhaps, but it doesn't lessen the fascination of their parallel genesis. The world is being destroyed by unfettered, voracious capitalism in ways so obvious that even widgets extruded from the intellectual-property mill are compelled now to occupy the same sociopolitical spaces as an independent film. I don't know that it's possible to qualify this development in that while it seems like progress, history has a way of reducing revolutions almost instantly to T-shirts and freshman dorm-room poster-ganda. Capitalism is undefeated. I loved Vivarium, Finnegan's previous film, a great deal, mainly because it played out manifold variations on its philosophical theme: to what extent does biology determine behaviour? Nocebo is similar in that it, too, asks a question about guilt and vengeance, then works over through multiple approaches to the answer before landing on the same conclusion that notions of good and evil are arbitrary distinctions imposed on innate compulsions. A mother will be compelled to avenge her child because a creature is obliged to reproduce itself. Anything else is merely obfuscating chantilly on an intrinsic cake.

Nocebo isn't as successful as Vivarium because it's not as disciplined. (It should be said, however, that Vivarium and Nocebo are a good deal better than the still-better-than-it-needed-to-be Black Adam.) It's about a fashion designer for children named Christine (Eva Green) who, in the middle of a pint-sized runway show, receives a phone call about a deadly fire raging out of control at one of the Filipino sweatshops manufacturing her clothing line. Upset but too busy to deal with it, she has a vision of a diseased dog, filthy with tics, who shakes off little parasites, one of which infects Christine with a terminal case of seasonal depression. This is cause for concern for her marketing-executive husband Felix (Mark Strong) and their spicy moppet Bobs (Billie Gadson), of course, so enter live-in Filipino caregiver Diana (Chai Fonacier), who arrives unannounced to Mary Poppins them all back to life. Nocebo is another in the line of proud evil-lady interloper flicks like William Friedkin's The Guardian, Curtis Hanson's The Hand That Rocks the Cradle, and Seth Holt's The Nanny, and as Diana is never for a moment not acting like a total weirdo, it's immediately obvious what's going on. But as the puzzle should only ever be part of the fun of a film, the question becomes, Is there enough meat left to worry on the bone after Diana's entire character arc is essentially stated in the first 10 minutes? I would say yes. But just.

The film's chief selling point is the always-exceptional Green. She's wonderfully unlikeable here, brittle and harried. She pops pills, has sudden seizures (it's fair to wonder if they're psychosomatic), and is dependent on a career to define her self-worth when there's a small child right there in obvious need of her attention. Strong's Felix, condescending and out of patience, isn't much better. When Christine accuses him of being a misogynist and a control freak, we're put in the peculiar position of agreeing with her while also knowing that Diana is a witch or something invested in turning Christine against Felix. The marital dynamics, in other words, are well-drawn and nuanced. Felix resents Diana's sudden intrusion in their lives, but when Christine starts to feel better, his motivation in allowing her to stay lands halfway between relief his wife feels better and relief he doesn't have to deal with her anymore. There's a scene early on where Diana brings the couple breakfast in bed and Christine, after obviously luxuriating in the attention, notes Felix's irritation and gently upbraids Diana for this intrusion into their privacy. It wouldn't take much to pull a class read out of Nocebo--one based on race, too, as evidenced by Felix calling Diana's cooking "surprisingly" good. Outside of the familiarity of its conceit, it's smart. It has that going for it. What I'm struggling with is the lack of anything controversial to say about the evils of sweatshops or the impossibility of ethical consumption. I don't think there are two sides, of course, though I do wonder if Christine and Felix don't ultimately provide enough reason for us to ever root for them. I'm also concerned about the picture's Skeleton Key ending, which finally suggests that the supernatural exoticism of its Filipino bogey has...infected (?) the next generation of white folks. Dangerous stuff, and the kind of deep water that could have been avoided with perhaps more diversity up the creative line. Still and all, a taut and well-performed exercise.