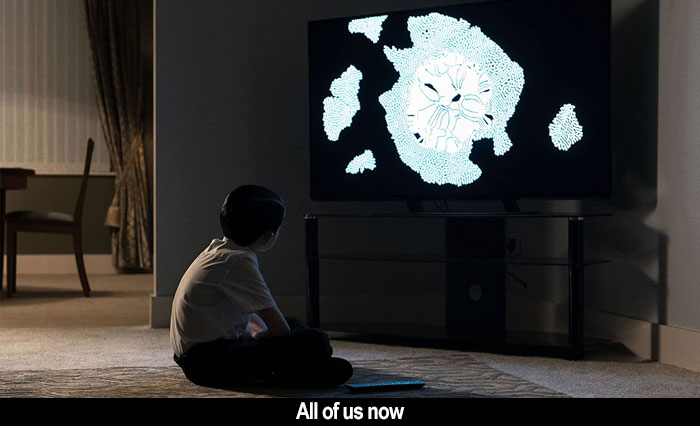 by Walter Chaw Lorcan Finnegan's Vivarium cues what it's going to be about with a title that could, arguably, also describe movies: artificial, controlled environments constructed for the observation of collected specimens. As the film opens, nature footage of a cuckoo bird pushing baby birds out of their nest to take their place segues into grammar-school teacher Gemma (Imogen Poots) leading a classroom of kids acting out a windstorm. In the next scene, Gemma counsels one of her young charges as the child discovers the dead-bird babies on the ground beneath a tree. A cuckoo could be responsible, she says, and it's terrible, of course, but it's nature. If you were to stop watching Vivarium there, about five minutes in, you'd miss some fun stuff, but the whole film has already been summarized. The picture boils every impulse down to biological impetus, you see. But rather than making Vivarium simplistic, this philosophical determinism makes the behaviours of its subjects extraordinarily complex and interesting.

Gemma is dating Tom (Jesse Eisenberg), and the two are looking at buying a house together en route to marriage, maybe a family down the road. They find a realtor in twitchy Martin (Jonathan Aris), who shows them a place in a development called "Yonder" that looks like every other place in Yonder on a street that looks like every other street built on a grid stretching as far as the eye can see. The house is nice, if sterile and prefab: lots of space to grow in but not a lot of character. Gemma and Tom tell Martin they're going to keep looking, but Martin is gone and, even after a day of driving in one direction, they find themselves pulling up to the house they were looking at--the one that looks like every other house. They're trapped, but their needs are provided for in form, if not entirely in substantive variety. Freeze-packed food in the shape of shrimp and strawberries and other luxuries keep them alive. And then one day, in one of the boxes that appears in front of their home, there's a "baby" with a note that says they will raise it in exchange for their release.

So they raise the little cuckoo; it's just nature, after all. When it's a child of around nine or ten (Senan Jennings), it spends all its time imitating Gemma and Tom, and screaming when it wants to eat or watch the strange, mesmeric patterns that are the only channel they get on the television. Tom becomes obsessed with digging a hole in their front yard. He does it every day like a job he leaves for to return at night, filthy and exhausted, to Gemma and the thing they're raising. One day, Tom tries to kill the thing but Gemma won't let him. When the thing gets older (Eanna Hardwicke), it's gotten just good enough at mimicking how a person acts to trigger an Uncanny Valley effect. The obvious place to go with Vivarium is to see it as a satire of suburban living, what with its acres of McMansions populated by the same people with the same kids and the same cars, the same meaningless jobs and the same empty existences. And while Vivarium does that, that's the easiest thing it does.

The harder thing Vivarium does is hit at the root causes of civilization. What are love and devotion? Biological products of species survival, no more complicated than a bird's feeding a cuckoo it finds in its nest? Gemma declares forcefully to the changeling that she's not its mother, yet what causes her to shield it from being murdered? Tom says Gemma is protective of the thing because she's a "good person," and so Vivarium also wonders what it is that being a "good" person means in nature. Is the cuckoo a "bad" bird because of what it does? Is the Tarantula Hawk wasp a "bad" insect for what it does to the spiders it paralyzes and impregnates with its carnivorous larvae? Or is it good for wanting to perpetuate itself? Is the notion of morality entirely meaningless in the context of species survival? I don't know that there's any good answer for that, and Vivarium, faithfully, offers no answers.

The closest analogue to Vivarium is Vincenzo Natali's fascinating Cube, where a construct appears as a possible creation of the inevitable social evolution of man, with no identifiable single human creator. In that film, the social collective is implicitly responsible for a device that tortures and exterminates humans arbitrarily. The selection and torment, and study in a way, of Gemma and Tom, is likewise arbitrary, though not capricious. There's no more ill-will towards them than a cuckoo has for its hosts. Ascribing emotion or intent to the "others" in Vivarium is foolhardy and unsupported by the text. They are as smooth and frictionless as the "other" in Annihilation or 2001: A Space Odyssey in terms of our attempts to find some kind of moral purchase driving their actions. What's really interesting is how Vivarium also doesn't suggest that their quest is one of world domination--just assimilation with, you know, a few casualties. The production design is nifty, while a late payoff is brilliant in a Ted Chiang way. There's an entire film's worth of depth in its closing montage of funhouse imagery hinting at worlds in the spaces between things à la Theo Anthony's brilliant Rat Film. Vivarium is wonderful. Saban, as a distribution company, is, between this and Guns Akimbo, on a roll.