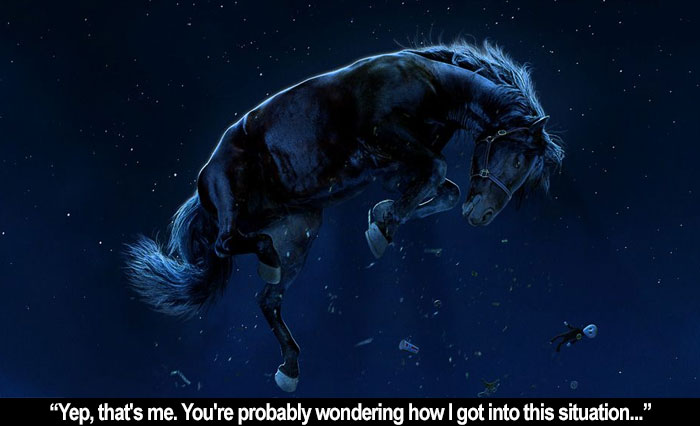 There's an apocryphal story about a rider handed out to the crew of M. Night Shyamalan's Signs warning, among other things, never to ask the director why his hydro-sensitive aliens would travel to a planet that is 71% water and prone to rain. I don't know if that's true, though I guess it doesn't matter. Signs is a handsomely mounted film--Shyamalan's third, he would tell you, but in reality his fifth--whose internal logic crumbles like a house of cards the moment any kind of pressure is placed on it. I try to avoid pulling threads in films so long as they earn a suspension of disbelief, and I think Signs is right there on the edge, teetering between pulling it off and doing a pratfall into a canyon of its own unnecessary, some would say arrogant, lapses in logic. The number of supporters it still has confirms that the things it does well, it does really well. Jordan Peele reminds me a great deal of M. Night Shyamalan. His first movie, Get Out (which actually is his first movie), was, like Shyamalan's "first" movie, The Sixth Sense (which is his third), so culturally indelible it introduced a phrase into the common vernacular. The problem with making a picture so massive it shifts the zeitgeist around it is not the high expectations attached to a follow-up but rather the way this much fame and power tends to fuck with your head. Maybe you don't rewrite your scripts so much anymore; maybe you stop listening to notes from people who are smart because you're the brand and everyone wants a piece of you. You have fewer people you trust. You start to believe your own press. You start to worry you're alone.

The choice presented to people who watch Jordan Peele's Us and now Nope is between a critical evisceration showing how the accumulation of sloppy details muddies the message or a rapturous embrace of a filmmaker with a keen sense of where to point the camera, an appreciation for the slow burn, and rage to spare about the way things are. The choice, in other words, is whether or not to believe the message is so important that it doesn't matter if the film has holes in it. The wonder of Get Out, leaving aside its literal cop-out of an ending, is that it's both brilliantly staged and About Something. The problem with Us is that its messaging is murky (or I'm too stupid to get it, and there's a good chance I am), and so its execution can only be as adroit as its unrefined middle. It shared this problem with the atrocious, Peele-produced reboot of "The Twilight Zone", whose episodes were too long and too proselytizing. Get Out works because it worries as much about the journey as it does about the destination. It's an object Peele's examined from every angle; its tensile strength has been tested and retested. It was seaworthy well before it was launched, because it had to be. His subsequent work takes on water before it leaves the shore, and I'm not convinced he sees it above the din of his vision.

Anyway, Nope is about a family of horse wranglers who rent out their services for various horse-related projects, only to find their future imperilled with the onset of convincing horse CGI and the mysterious death of their patriarch (Keith David), who has left behind a beautiful ranch decorated with, among other things, a framed poster of Sidney Poitier's Buck and the Preacher. The children who inherit the business are OJ (Daniel Kaluuya) and his sister Em (Keke Palmer)--the former his dad's longtime helper, the latter distracted by a cloud of side gigs she considers to be her primary gigs. This is not explored. After their latest horse-related gig goes awry due to a combination of OJ's introversion and Em's extroversion, OJ realizes he needs to sell another of their horses to Jupe (Steven Yeun), the former kid actor now slumming as the owner of a bizarre theme park, the theme of which we don't know until the middle of the film. Tell me again how it is that OJ didn't know, either.

Jupe used to be the "Arnold Drummond née Jackson" of some sitcom that was cancelled when its chimp star went full chimp. We see flashes of this incident, including a kid Jupe (Jacob Kim), the only member of the cast who survived with his face intact, looking terribly traumatized, which may explain why he thinks he has a way with predators. Or not, I don't know. One might surmise his confidence in predator-wrangling is derived from the residue of bravado a near-death experience leaves behind, like the Jeff Bridges character in Fearless. Again, I'm drawing from personal knowledge, not anything the film reveals in any way. Whatevs. Now I wonder if the popping balloons that set the chimp off are meant to be an instructive anecdote for the film's climactic solution, though I don't know how Em could have known about them. Whatevs. I think a lot of people will call Nope thought-provoking--and many of those people will have called Us thought-provoking, too. There's probably even an overlap with people who thought Tenet was thought-provoking. If you boil it down, I must grant that my thoughts are provoked by Nope but wish to add the caveat that it's possible to be fruitfully provoked, just as it's possible to be provoked because the plot is a mess.

Here's where the spoilers start: One day, OJ sees a UFO steal one of their horses. He and Em hatch a plan to get a good, clear video of it they can sell to Oprah Winfrey, thereby saving their farm. It's unclear whether the farm is in peril--we presume so because they had to sell a horse and OJ seems sad, but we don't know how dire the situation is, and in the end it doesn't matter. A good thing, as their plan is balls. In the course of tricking out their ranch with a couple of hi-tech cameras that suggest they can afford to keep the lights on for a while, they earn the attention of quirky comedic relief Geek Squadder Angel (Brandon Perea). Now a trio, they fail spectacularly at getting a clear shot of the bogey--mainly because the bogey carries with it a mobile EMP, which would have instantly made sense if this were the 1980s and everyone was afraid of nuclear annihilation but makes little impact now, especially when part of their plan, ultimately, is to outfit everyone with walkie-talkies they know won't work when they need them to the most. Oh, and the UFO is alive. Alas, Nope is a monster movie that can't figure out what its lore is, meaning either Peele doesn't care enough to create one or is now so bunkered and solipsistic he's convinced it doesn’t matter if the lore is consistent, since what he has to say is so important. I know Peele isn't careless, so it must be the other: On the Shyamalan self-delusion timeline, in other words, he's closer now to Lady in the Water than to the obvious alien-invasion analogue of Signs. Working to his benefit, Peele does not appear in his own film as the author of the new Bible. Working to his detriment is that Signs, for all its howling inconsistencies in its pursuit of faux-A Prayer for Owen Meany profundity, is much scarier and tighter than Nope. Both are gorgeous shitshows, but Signs is a half-hour shorter and doesn't feel like it's missing entire scenes.

Which isn't to say there's nothing to recommend Nope. The cinematography, by Christopher Nolan's current fave Hoyte Van Hoytema, is glorious, and the Jaws-appropriating score by Michael Abels gives Nope a lightness it doesn't earn. Although it uses a sledgehammer to talk about how fame chews people up and spits them out, it's a point well-taken whenever and however it appears--even if it kinda sorta suggests a kinship between a monkey and a little Asian kid. The best thing about Nope is the cast. The taciturn, barely-vocal OJ is a fascinating and empathetic hero, and Kaluuya is a true movie star. Palmer is delightful and natural, playing an extremely irritating person without ever being irritating to watch. Yeun has cornered the market on vaguely traumatized, unsettlingly detached ciphers between this and Burning, while Perea makes for a charming himbo. As a Quint figure, Michael Wincott is pleasantly overcooked, although there is something about the way he's written--and what he represents--I found hostile and off-putting. He's not unlike the art critic in Nia DaCosta's woeful Candyman reboot, Peele's last production. (White people, amiright?) I kept wishing these actors were in a better movie, one that cared a bit more about crossing those t's and dotting those i's so you could spend more time enjoying their company and less time dwelling on all the stuff that's usually fun about movies like this.