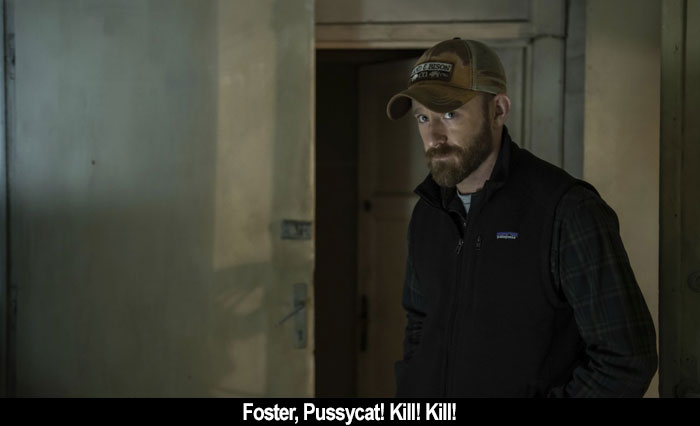 by Walter Chaw Tarik Saleh's The Contractor reminds me a lot of Michael B. Jordan's recent attempt at a franchise-starter Without Remorse in that both are the sort of workmanlike action pictures that once kept multiplexes afloat but now occupy a mid-budget niche relegated to streaming services. Its closest analogue might be Amazon's "Reacher" series in terms of its clean action, straight-line plotting, and lantern-jawed "all-American" hero trained to kill and prone to angst over his lethal ways. The Contractor adds some wrinkles in using the plight of veterans returning from service with neither financial nor emotional support while also reserving some criticism for the private, for-profit contractors who send mercenaries into conflict zones for the purposes of ratfucking and wetworks. Mostly, though, it's an able showcase for Chris Pine as a sturdy action hero who is also a non-threatening avatar for the Average Joe demographic: handsome but cool, clever not brainy, self-sufficient but loyal to an old buddy, a good dad and good Christian good at tamping down "girl" emotions and, moreover, good at boom-boom stab-stab.

The old buddy in question for Pine's Harper is shifty Mike (Ben Foster), who's also ex-military--Harper's former CO, in fact--and suspiciously keen to get Harper in with the mercs to whom he's been selling his services since leaving the armed forces. Last good man Harper is only looking for the kind of illicit employment Mike can offer because the government has stripped him of his pension and insurance: As a young husband and father, well, times are tough out there, even with a "labour shortage," amiright? This leads to an interesting scene with Rusty (Kiefer Sutherland), head of a paramilitary group that might be interested in Harper's specific set of skills. There's not a lot of courtship to their interview; they meet in a compound of like-minded men of violence and fidelity to the almighty dollar. Harper is in because Mike vouches for him, and the only thing Harper needs to hear is that they'll pay him enough money to do the only thing he's good for, relieving his family of the fear and desperation most Americans have come to claim as their birthright. The Contractor's first hour is strong.

The picture's second hour is strong, too, but, freed from much sociopolitical resonance, it's a fairly rote checklist of firefights, chases through European cities, hand-to-hand combat, field medicine, code words, locked satellite phones, and safehouses. The action makes its way back to the United States, where there are betrayals to be repaid, culminating in a final showdown at the nutjob compound so that Harper can reassert his moral authority and re-enter his house justified. The Contractor's main objective is to build a solid foundation with a strong cast and a good script and pay it off with well-choreographed action sequences and an ending that ties everything up in a knot so clean it betrays the entire exercise as more crowd-pleaser than a critique, much less satire, of how capitalism has fouled all waters. There's nothing wrong with that, of course. No "but"s. The Contractor begins as a Seventies paranoia thriller and ends as a vehicle Liam Neeson could have pulled off without breaking a sweat. Which is less a complaint, at the end of the day, than an acknowledgement that Saleh, with his strong documentary background (Sacrificio: Who Betrayed Che Guevara? and Gitmo), brings an immediacy to Harper's domestic fears and an unvarnished grittiness to Harper's odyssey. I believed that Harper was afraid for his family's future, that his legacy as a second-generation military guy makes it impossible for him to completely blame the government for not taking care of him, and that when he goes into action in the mean streets of Berlin, there's a chance he's not coming home. Really, what more do you need?