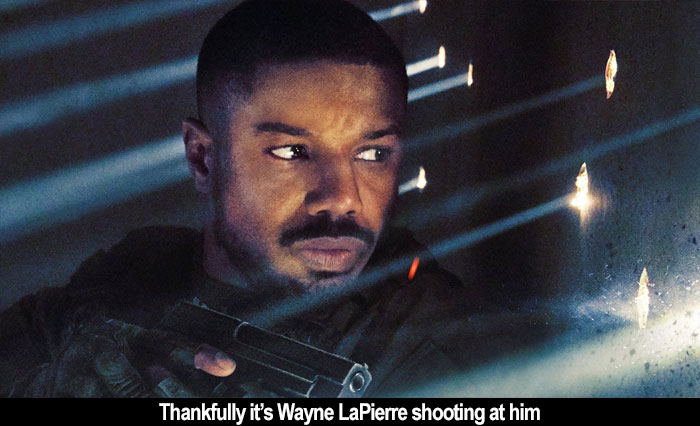 Tom Clancy's Without Remorse
***/****
starring Michael B. Jordan, Jodie Turner-Smith, Jamie Bell, Guy Pearce
screenplay by Taylor Sheridan and Will Staples, based on the novel by Tom Clancy
directed by Stefano Sollima

by Walter Chaw A little less than halfway through Stefano Sollima's Without Remorse, ex-Navy SEAL hotshot John Kelly (Michael B. Jordan), decked out in an orange prison jumpsuit, tells his former commanding officer, Lt. Greer (Jodie Turner-Smith), that they fought for a country that didn't love them for the promise the United States represented--and that, somewhere along the way, a contract was broken. Kelly is the blunt object the Daniel Craig Bond cycle identified Her Majesty's finest as: the spiked ball at the end of a medieval pike, all dressed up in fancy gadgets and ritualized dogma, amounting at the end to savagery in patriotic drag. He's not Odysseus in this construct, he's Achilles; his only weakness is that he believed there was ever a contract in the first place. The message is clear in this re-imagining of one of Tom Clancy's lesser-known bits of military/industrial agitprop that should this become a franchise, the thrust of it will be that its rage is righteous...and righteously Black. Simply the name change for Kelly from the source material's "Clark" speaks to the idea of rejecting one name, given by a white person, in favour of a name one chooses for oneself when specific social contracts have been breached. And the moment of Kelly's radicalization, when his home is violated and his life is stolen, likewise assumes a particular racial resonance.

The world is divided as the film is divided: between terrorists and their victims. "A big country needs big enemies," Secretary Thomas Clay (Guy Pearce) says, outlining the classic plots of that old "Outer Limits" episode "The Architects of Fear" and, oh yes, Watchmen. It's his rationale for ginning up conflicts in the world, the better to distract the U.S. from tearing itself apart from within. In a pair of scenes set inside cars--one on fire, one sinking to the bottom of the Potomac--Without Remorse illustrates how no matter who the enemy is, be it a Russian diplomat or an American cabinet member, we're more or less in this together. For the rest of it, Without Remorse is a series of frank, unromantic action sequences held together by this framework of thin moral distinctions. There's talk of avoiding wars and covering tracks, but really, it couldn't give one sour fuck about that. It's not The Hunt for Red October, it's a piece about how vengeance is simultaneously empty and the only thing of value left after everything is taken from someone. (Including their illusions and beliefs.) It's interesting that this and Nobody appear in such close proximity to each other. Even more interesting is that of the two, the deeply hopeless Without Remorse is the more hopeful of the two. The government-trained assassin in Nobody, after all, murders lots of people because working the sort of job 99% of us have to work has humiliated him so much he needs to feel like a man again. Without Remorse at least offers a medieval sense of chivalry to go with its blunt, medieval instrument of war.

After doing something not good during a secret mission in Aleppo, John and his team discover their targets are Russian and not, as they'd been led to believe, Syrian men, whom it would be "okay" to exterminate. CIA spook Ritter (Jamie Bell) offers assurance that there's no need for them to know more than they do, and so, blood-sated, John returns home to his pregnant wife (Lauren London), their Rockwellian suburbia, and a future that does not belong to him. When the Russians come calling--just like the Irish do in another Clancy blockbuster, Patriot Games--Kelly's family are the casualties. The difference here is that the Russians are maybe justified in protecting their own to the extent that the Americans are justified running secret missions in a ravaged but sovereign state, to the extent that... Everybody's a bad guy, there's actually no justification for anything in Without Remorse. Clancy once wrote a revenge story based around the outrage that a foreign power would have the temerity to launch an attack on American soil; this one is about a guy trying to kill the men who murdered his pregnant wife because there aren't any flags left to salute in this magnificent cess. I appreciate that kind of cynicism. It's almost noir. This world is a fucking sty, and you don't wallow around in it for any length of time without getting covered in filth and shit.

Patriotism is often cited as the reason everyone in the film commits the atrocities they commit. As violent nationalism becomes the primary domestic threat in dozens of "developed" nations, ours included, it's fair to wonder if "patriot" is now just a dog whistle for white supremacists. Everyone other than the two Black characters in Without Remorse is driven by duty to country. They all, Americans and Russians alike, want to preserve the cultural integrity of their motherland, while Kelly and Greer just want to kill the white people fucking with them without getting killed in the process. Late in the game, when everyone else has gone ahead, it's Greer who stays behind to extract Kelly. It's also Greer who, whiskey in hand, breaks protocol to give Kelly the information he deserves. She's the only one who doesn't lie to Kelly. He says at one point that he thought he was a pawn hunting a king but then realized he was merely hunting a version of himself manipulated by other masters. While it's tempting to say that Without Remorse is familiar and rote, imagine a "Hamlet" where the Melancholy Dane is a trans man, or a Star Wars where Luke is a girl, and consider whether or not casting changes the depth and quality of a stock master plot. The dark heart of Without Remorse, ludicrous and overblown though it may be, occupies the same space as co-screenwriter Taylor Sheridan's Hell or High Water in that both are stories of how the system has failed even those characters representing quintessential American-hero archetypes. If the deck is stacked against cowboys and soldiers, what chance do any of the rest of us have?