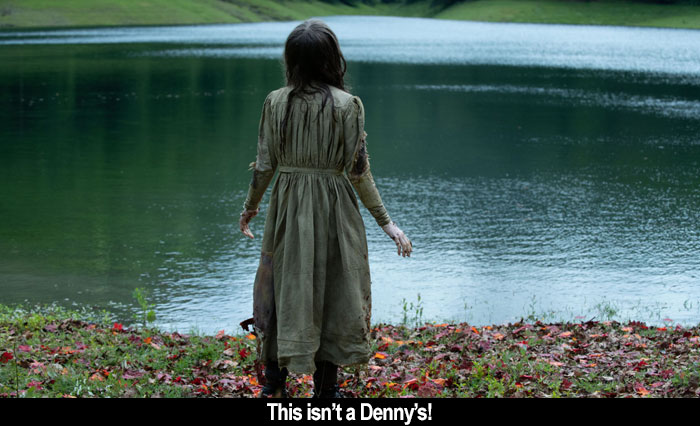 by Walter Chaw The Catholic Church has an outsized influence in the events of the last couple of centuries. They have increasingly occupied the role of collective boogeyman in the West as we start to reckon with the consequences of Manifest Destiny, the Age of Exploration, and the attempts to eradicate indigenous peoples in the name of a wrathful God too small to allow other faiths. The mission project in the West, the Residential schools designed to separate children from their cultures in the name of a monoculture arrayed around a cannibalistic blood cult steeped in atrocities committed under the banner of their notion of Heaven. The Magdalene laundries in Europe, the sexual abuse scandals so rampant they're less scandals than functions of a diseased system that shelters monsters, shuffling them around to unsuspecting diocese to avoid coming clean about the extent of their callow predation. The church has aligned itself with the "pro-life" movement in the United States, a fanatical and radicalized cult invested in the oppression of women and sexuality. Heavily politicized, they suckle at the public teat and continue a baked-in tradition of profiting greatly from the fear and loathing of the very poor, the very desperate, the very stupid. Every new revelation is met with obfuscation, denial, and obstruction instead of a willingness to shine light into the corners of their unresolvable, bestial intolerance and sinfulness. Throughout history, the Catholic Church, as an organization, has proved emblematic of absolute power corrupting absolutely. It's become a synecdoche for abuse. Of course, this makes it a fertile plot where fulsome gardens of horror can grow.

All the Moons tells the tale of little Amaia (Haizea Carneros), who, during the last Carlist War at the end of the 19th century, is the ward of a nunnery--an orphan, most likely, or a child born out of wedlock who, as the film opens, finds herself under siege with the others from an invading army. Before their inevitable deaths, a nun demonstrates her charity by telling a boy in her care to "shut up" when he expresses fear. The building's destroyed and everyone's killed; the Lord's Prayer proves to have little facility in protecting the devout from their ravaging, though it seems clear that an eternal reward is the only thing the Church has ever offered in exchange for the suffering it metes out to penitent and heathen alike. When the dust clears for a moment, what's left is Amaia, trapped in the rubble and bleeding out. There, she begs an apparent vagrant (Itziar Ituño) to loot the ruins for help. And the apparition agrees, but wants Amaia to be sure she's ready to pay the consequences of being healed. Amaia is sure. And so, she's healed. And she can't ever die again. The rite of Catholic Communion promises the same eternal life in exchange for a sanguineous bargain: drink blood, eat flesh, both of mortal man--and live forever in sway to a narcissistic monster of appetites, covenants, and commandments. Amaia has her eternal life, but she needs blood to keep it. It's a devil's bargain dressed in the wolf's clothing of the cannibalistic Catholic blood cult. Amaia asks for help and receives an infinity of life in death. She's well-fucked either way. The irony is delicious.

All the Moons isn't a vampire film so much as it's a take on A.I. Artificial Intelligence that questions the responsibility we have to the things that love us. Amaia, who appears to be just another war foundling, is taken in by lonesome widower Candido (Josean Bengoetxea), whose wife and child died in childbirth. He's caught Amaia in a wolf trap and wonders how her bone isn't broken, how her tiny, mangled ankle isn't even bleeding. But like Gepetto and the wood golem he carves, Candido is lonesome. Lonesome is an affliction of the mind that disguises the monstrousness of salvation narratives when they present themselves. To Candido, Amaia seems an angel sent to ease the irresolvable darkness of his existence. He tells everyone in the village the same: she's an angel, a divine emissary so precious that the local priest licks his chops, of course, as grist for the old iron, or perhaps looking to sate his earthier appetites (as if there were any difference). Candido as Gepetto makes Amaia his Pinnochio, the fake child who would very much like to be real. All the Moons has about it the air of genuine fairytale: not the narcotizing bullshit with which we dose our kids in the West, but Neil Jordan's psychosexual wyrms, Italo Calvino's invisible cities, and the unexpurgated Brothers Grimm. The sensual analogue to this film is Jordan's The Company of Wolves and Byzantium. Like them, All the Moons reverse engineers the Universal Monsters genres (werewolves! vampires!) for archetypal resonance. Religion works because it deals in the same primal language of sex, fear, hunger, and violence, promising that we're better than the clay from which we're made while ignoring that the earth is wet from the blood we've spilled to momentarily slake our lust.

Amaia is lonely. Candido is lonely. The vagrant who nursed Amaia back from death with a drought from a vein (not so esoteric a belief, this feeding of youthful flesh and blood to the old to grant strength), known only as "Mother," is lonely, too. They are tied to one another by their isolation and pulled through their lives by that diaphanous tether. They all make promises they can't keep, and another hook of religion is a promise that can't be broken. When my daughter was born, I swore I'd always look after her. If everything goes well, life, and the shortness of it, will make me a liar. All the Moons understands that. At the base of it, the picture's about how parents can't protect their children from the wolves at the gate--not for long, at least, certainly not forever. Parents die. Children become parents and then die, too. But our desire incepts these beliefs about supernatural immortality to make our promises of eternal commitment the truth rather than mere ash in our mouths. We create rituals, conjure spirits, eat the living to make them a part of us at a molecular level in the hopes that we'll gain wisdom with carnal communion. All the Moons is a horror movie about life as a terminal condition. It's melancholy and beautiful, a Keatsian Grecian urn of a film in which the witness to the passage across oceans of time has been rendered into images graven into the surface of a thing that is itself cold and inert. Amaia is the vessel into which we pour our goodness. All she requires for the service is a bit of warmth--a lizard basking on the sun-baked rock that is your hope something of you will persist after you've passed from this terrible, frozen place.