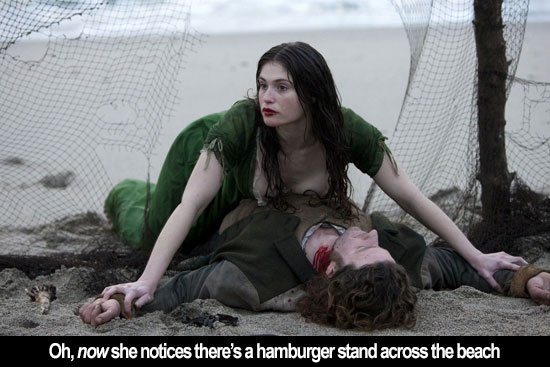 by Walter Chaw What is it about the Irish character, that particular quality of melancholy fatalism, that seems to inform the great works of native sons Beckett, Joyce, and maybe Yeats in particular. I like G.K. Chesterton's description of Ireland as a place of "men that God made mad,/For all their wars are merry,/And all their songs are sad." It infects the folklore, the story of the crags and the heather, the looming, low skies pregnant with what Michael Almereyda's criminally-underestimated (and long forgotten) The Eternal fashioned into a creation story involving unimaginable losses and the sweet, bitter tears they inspire. To that film, add John Sayles's The Secret of Roan Inish, Neal Jordan's Ondine, and now Jordan's rapturous Byzantium: a quartet of supernaturally-tinged pictures that together form a lush polyptych that captures the very sensation of walking through Dublin in the rain, or along the shores of Galway, or through the pages of Ulysses in the company of Leo and Nora. As for Byzantium, it's beautiful, and sad, and has an eternity to it that's reflected in its tale of a "soucriant," a succubus of sorts with a Dominican history and favoured by Jean Rhys in novels that were themselves attempts to come to terms with the tragedies of her life as an outsider. Jordan, well-read and never shy about expressing that literariness in his pictures, is producing in his later work the very evocation of a city from Italo Calvino's Invisible Cities (a book he once told me he admires): Ersilia, an abandoned city built not of walls, but of strings the lost inhabitants used to mark connections with one another. Jordan weaves an intricate web with Byzantium, a film that, before even attacking the tensions within, provides tensions without in its title, most likely taken from Yeats's "Sailing to Byzantium," which is itself about tensions between the "artifice of eternity" and the temporariness of youth. Turns out, the film is about that, too.

The soucriant in question is a two-centuries-old whore of low bearing, Clara (Gemma Arterton), who travels through time with her daughter, Eleanor (Saoirse Ronan, fast becoming the best actress of her generation), evading a council of vampire elders who never really liked the idea of allowing a woman into their ranks in the first place. An unofficial sequel to Tarantino's Kill Bill, Byzantium at its heart is about the sacrifices of motherhood and the difficulty of the split between mother and daughter. That Arterton delivers the kind of performance she does--and I'm thinking not of her physicality, her palpable sexiness here, but rather of a particular moment at the end where she grieves the evolution of her relationship with her daughter--is just the first of the picture's myriad surprises. It's a Kill Bill sequel, too, in that Byzantium allows Clara to be extremely dangerous, not only to her human quarry, but to her undead judges as well, fuelled as she is by a sense of maternal instinct while armed with intimidating strength and cold ferocity.

Clara reminded me more than once of Gina Carano's character in Steven Soderbergh's Haywire. It's the best kind of feminist picture: the kind that doesn't dwell on the politics of presenting a woman--or several women--as intellectual, creative, physical equals of the male characters without coding them as masculine (see: Ripley in the Alien series, or Sarah Connor in Terminator 2). Clara and Eleanor arrive at a crossroads as the movie begins with their past catching up to them, relocating to a broken-down coastal resort where they meet lonesome Noel (Daniel Mays), who's just lost his mother and inherited a dilapidated hotel called The Byzantium at which the two women quickly set up base. It's here that Eleanor, drawn to the terminal and the elderly (and they to her, calling her "angel" and asking her for release), meets pale, young Frank (Caleb Landry Jones), with whom she finally shares her secret as a story, written in longhand and "released to the wind."

That sense of romantic rapture in the act of creation captures famous brooders like Percy Shelly and Lord Byron, but the mood of Byzantium is more aecidia than Romanticism--more Yeats than Keats, in other words, although the Romanticists are ever at the corners of Jordan's visions of temporariness burned away in the crucible of eternity. Looking back, his films are after all fairytales warning of the absolute destructiveness, and euphoria, of love. But if they come with warnings, they end by and large with his protagonists succumbing to love's sway. It's that Irish fatalism again, made manifest in another tale of vampires (after Jordan's Interview with the Vampire), afflicted by that state of restlessness or despair first identified with ascetics who tended a garden of solitude for their faith. Clara and Eleanor are ascetics, the irony of their state underscored by the intimate carnality of their sustenance. Clara is all sex, Eleanor all mercy, but both find themselves in mortal embraces. At the end, there is no distinction between orgasm and extinction. It is as clear a mission statement as Jordan has ever made on film, this idea that there can never be a separation of mind from body.

Around them, Jordan creates an impossibly purposeful vision of the world. Always an accomplished visual stylist, Jordan, paired with cinematographer Sean Bobbitt (Steve McQueen's DP on Hunger and Shame), conjures an otherworldly environment of crumbling towers, piers, and subterranean spaces. Note a moment early on when Eleanor flees her first feelings of warmth for Frank to run into, by chance, her mother and Noel--both parties approaching the camera in one lengthy shot, but Eleanor from an underground tunnel and Clara from above. It's stunning--and evocative, too, in establishing the daughter emerging, the mother smothering and omnipresent.

It's tempting to say the supernatural elements are mere dressing on a mother-daughter psychodrama, but to do so would be to underestimate the supernatural power of the relationship between mother and daughter, or father and son. In fact, what Byzantium is, is the best way to tell the story of the tension between the artifice of eternity and the temporariness of youth. The love stories in the film, the utility of Clara/Noel vs. the blush and bloom of Eleanor/Frank, are unerringly insightful and bolstered by a sensational cast. Often lost in discussions of Jordan's visual rapture, I think, is his facility with his actors--looking back, I can't think of a wrong performance in his entire oeuvre. The violence in Byzantium, meanwhile, is extreme, shocking, and refreshingly unromantic; and the lore of the picture's soucriants, such as it is, offers a brilliant, subtle existential twist that references, again, Yeats's poem: "Whatever is begotten, born, and dies/Caught in that sensual music all neglect/Monuments of unaging intellect." It's a lyric of a film, this Byzantium, a poem of female sexuality and gender politics, of mothers, of love, of what it is to betray and what it means to be loyal, and of Ireland. Sad, gorgeous; I can't wait to see it again, to see what else I can see.

@Fares002: That's because Walter isn't connecting Kill Bill as a revenge story, but as a mother-daughter story. (Recall how it ended.)