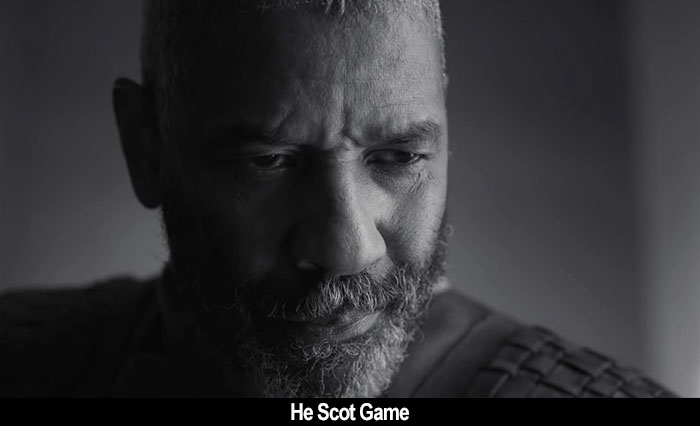 Visually, The Tragedy of Macbeth again falls somewhere between Kurosawa and Welles: a minimalist/formalist exercise that privileges its looming sets and camera placements designed to underscore how these players are trapped in the roles they must play out into a forever of interpretations. Macbeth (Denzel Washington) and Lady Macbeth (Frances McDormand) are discovered in door frames, windows, and corridors, or seen from extreme high angles that make them insignificant in all their petty scheming--their greed for power the better to achieve a legacy their childlessness has robbed from them. Macbeth's nihilistic "Tomorrow and tomorrow and tomorrow" soliloquy post-Lady Macbeth's suicide hints at the inevitability of fate and informs the staginess of the picture's sets and its "poor players" who "strut and fret their hour" upon it. The question of what we leave behind is what The Tragedy of Macbeth would seek to answer--at least to the extent that it poses it as the essential question people face whilst whipping past middle age and swiftly into their dotage. In Coen's hand, the material becomes less a play about the destructive influence of power than a desperate, even pathetic grasping for relevance: not a raging against the dying of the light, but an amateur-night aspirant doing his best not to be dragged off by Sandman Sims, dancing in his periphery from the wings.

Coen's adaptation hinges on one of the more curious lines in Macbeth. From Act 1, Scene 7, when Macbeth has second thoughts about the regicide he and his wife have planned and Lady Macbeth, as a rhetorical slap to the face, says:

What beast was 't, then,
That made you break this enterprise to me?
When you durst do it, then you were a man;

And to be more than what you were, you would
Be so much more the man. Nor time nor place
Did then adhere, and yet you would make both.
They have made themselves, and that their fitness now
Does unmake you. I have given suck, and know

How tender 'tis to love the babe that milks me.
I would, while it was smiling in my face,
Have plucked my nipple from his boneless gums
And dashed the brains out, had I so sworn as you
Have done to this.

A challenge to his manhood, it's also the only place where it's mentioned that the Macbeths have sired an heir and that this heir has likely died. They're too old to have another, hence the decision, once they've killed King Duncan (Brendan Gleeson, who between this and 28 Days Later... needs to stop looking up when he hears a crow) to also kill Macbeth's dear friend Banquo (Bertie Carvel), who does have an heir and thus threatens Macbeth's ascendancy to the crown. Aborting Banquo's legacy was always the motive for the assassination of Banquo and Banquo's son, Fleance (Lucas Barker), but in The Tragedy of Macbeth, the Macbeths' jealousy of Banquo is born of more than fears of a challenge to legitimacy: here, Banquo's progeny is an affront to Macbeth's barrenness. The closest analogue to this picture within the Coens' oeuvre is Raising Arizona, which likewise deals with a childless couple rationalizing an unforgivable crime after discovering they're incapable of siring offspring. Where that film resolves in a dream, or a prophecy, of the childless couple successfully conceiving and carrying children to term despite the predictions of an addled doctor, The Tragedy of Macbeth, itself full of dreams and visions, finds its dark prophecies of doom and ancestral lines truncated, fulfilled. The hopelessness of it--the discovery at the end of your life that everything you've fought to achieve has brought you nothing but nearer to death--has about it an Ozymandian irony that's exactly in line with the mordant sensibilities of, arguably, every Coen Brothers film that is not Raising Arizona.

The Tragedy of Macbeth's introspection is in line with an artist entering the final quarter of his career, setting off into a period without his partner for the first time and taking a moment to weigh the value of his work to this point. Washington is extraordinary in how he locates the self-doubt of a man unsure about what he's owed in a world that's taken much from him. He's matched, predictably, by McDormand, who gives her Lady Macbeth a quavering woundedness that belies the common perception of the character as power-mad and conniving. No Iago, this Lady Macbeth, she's injured and wants, perhaps, to provide a legacy for her husband she's not been able to give him biologically. It's almost a "Gift of the Magi" dynamic at work between the characters in this iteration: Rather than one goading the other to acts of atrocity, it's a loving couple who seek to push each other towards what they believe the other one wants to make up for feeling like a failure as a spouse. It's an intelligent reading of the text from a very specific perspective, a vantage at a remove distant and sad enough that I think the Three Witches constitute Coen's avatar in the film--all of them played in one body by the singularly peculiar Kathryn Hunter. Coen makes clear that there are three distinct personalities in this single apparition as they argue amongst themselves, offer riddles for Macbeth when he's searching for answers, and deliver prophecies that become self-fulfilling in the hands of the aged bent by too much grieving. She/they provide doom in the guise of hope. When we go looking for answers, we are more often cursed than blessed by what we find. The Tragedy of Macbeth is austere and mean, like getting old is austere and mean. Just like.