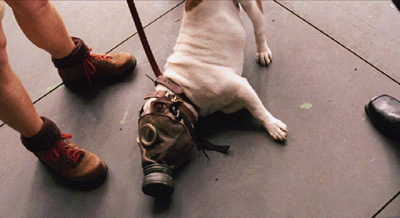 by Walter Chaw There's a great line in the Coen Brothers' The Ladykillers: The General (Tzi Ma), asked for his Buddhist perspective on a caper gone awry, offers, "Be as leaf floating down river. Kill old lady." Still, it's a poor blueprint for a film, as the picture locates its narrative rhythm in a desultory, listless noodle that ends right when it threatens to begin. With Tom Hanks playing the Alec Guinness role of affected cad with larceny--eventually murder--on his mind, The Ladykillers feels like an inside joke. (A slapstick gag featured prominently in the previews, for instance, sees Hanks plucking bills from the air in what has become the defining image of his career, from Forrest Gump's feather inanity to Hanratty's dollar bill futility in Catch Me If You Can.) Returning in a way to more familiar ground after the screwball shrine of Intolerable Cruelty, it's nice to see the Coens, credited as co-directors for the first time in their twenty-year collaboration, tackling another caper noir, but it feels more than a little stale this time around, contrived in the way that genius starts to feel when inspiration flags.

Professor G.H. Dorr (Hanks) assembles a crack crew of bank robbers--munitions expert Garth Pancake (J.K. Simmons) and his girlfriend Mountain Girl (Diane Delano); inside man Gawain MacSam (Marlon Wayans); expert tunneller The General; and muscle Lump (Ryan Hurst)--who rent out a room in the home of kindly, slightly demented Marva Munson (Irma P. Hall) that happens to have a root cellar just a few hundred yards removed from the buried vault of a riverboat casino. A series of misadventures follows, of course, leading to the realization that the success of their plot hinges on the untimely death of their kindly ward.

The pleasure to be had from The Ladykillers is found in the Coens' trademark gallows humour and affection for provincial Damon Runyon mutants, though the core humanity and disarming kindness of the filmmakers' early work has been replaced now with something like mean-spirited caricature. More unsettling is a new propensity towards racial slapstick, something that makes a little bit of sense considering that the original featured Peter Sellers but leaves a sour taste when it centres around an old African-American lady's ignorance of the racist central tenets governing her favourite charity: Bob Jones University. Repeated references to Edgar Allan Poe (including oblique intimations of "The Black Cat" and "The Cask of Amontillado") find their payoff in a murderous would-be bust of a would-be Pallas, dislodged by a bookend raven--but to no other end, it seems, than to demonstrate cleverness and a scary respect for narrative balance.

Though The Ladykillers is economical, wound so tight that the individual character introductions dispense with the niceties of context in a way of which David Mamet would be proud, it falters as a caper and brutalizes as a character-driven comedy. Hanks as something of a Colonel Sanders with an asthmatic wheeze for a laugh (one that sort of reminds of the Coens' own peculiar gasping explosions of mirth) amuses now and again, but the lasting images of the piece involve meticulous matching shots, a beautifully monumentalized garbage-covered island, and a setting out of place and time enough as to cast The Ladykillers as something akin to science-fiction. Unfocused and surprisingly unpleasant, for all its technical acumen the picture is a cold fish--a jape with the audience the sucker, a Fargo without that crucial, defining final speech about the beauty of a new day dawning. Originally published: March 26, 2004.

THE DVD
by Bill Chambers Touchstone issues The Ladykillers on DVD in competing widescreen and fullscreen editions. (We'll be discussing the former.) Measuring at 1.83:1, the anamorphic image has rich saturation and supple detail, although scenes featuring CGI assists have a nagging softness to them. Another mild caveat is that the film's 5.1 mix is presented in Dolby Digital exclusively--the last few Coen Brothers titles were outfitted with DTS tracks as well. Nevertheless, the audio is dynamic (gospel music sure does get loud), with appropriately cartoonish left-to-right and front-to-rear pans taking full advantage of the discrete soundstage. While the supplements are destined to disappoint for their paucity, they're quite fulfilling in and of themselves: full performances of the Abbot Kinney Lighthouse Choir's "Shine on Me" and "Trouble of this World," albeit in cruddy non-anamorphic video; an 11-minute featurette on the period instruments that were made from scratch for The Ladykillers, "Danny Ferrington: The Man Behind the Band", which not only includes the joyous (if incongruous) sight of Ethan Coen jamming on an acoustic guitar, but also goes off on an endearing tangent about Ferrington's brushes with the likes of Kurt Cobain and Johnny Cash; the self-explanatory "Slap Reel" (2 mins.); and a ROM-enabled "ScriptScanner." (You couldn't learn screenwriting a better way than by reading the work of Joel and Ethan Coen in addition seeing it.) Trailers for The Last Shot, The Alamo (2004), and King Arthur precede the main menu and join previews of Jersey Girl, The Village, Splash, The Ladykillers, and "Alias Season 3" under the heading "Sneak Peeks." Originally published: September 9, 2004.