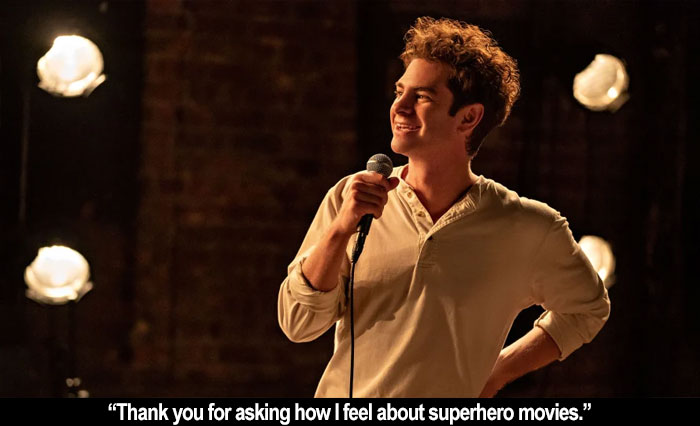 by Walter Chaw Dropping the same weekend as another hagiography for a narcissistic workaholic (King Richard), tick, tick...Boom! at least doesn't include a 70-page manifesto for its subject's unborn children. Also in its favour? It doesn't centre a man in the success story of two women. No, Lin-Manuel Miranda's technically-proficient biopic instead adapts the autobiographical musical of self-pitying tragic figure Jonathan Larson, played in the film by Andrew Garfield. Watching it, I got the feeling the whole exercise was just a way of showcasing songs from Larson's defunct sci-fi magnum opus Superbia, which... Look, there's a Ray Bradbury story called "The October Game" that tells about that nasty kid's game where you turn out the lights and put your hands in a bowl of spaghetti and someone says, "This is the witch's hair," and so on. Except Bradbury suggests that there's been a pretty terrible murder, and this is the murderer's idea of a Greek kind of justice. It ends with one of the most memorable lines in Bradbury's career: "Then ...... some idiot turned on the lights." I think about that line a lot, unbidden at the weirdest times; I thought of it during tick, tick...Boom! because I realized that some idiot will one day resurrect Superbia, a musical based on 1984, and make a billion dollars, thus driving me insane.

Anyway, tick, tick...Boom! is the piece Larson wrote just prior to the excrescent, Pulitzer Prize- and Tony Award-winning Rent, a musical so bad it ran for twelve years on Broadway. That's 5,123 performances, one of which was attended by future impresario Lin Manuel-Miranda--an experience he has credited with inspiring his own excrescent breakout musical, In the Heights. My objection to Larson and Miranda is largely that, well, I don't like the music. But I don't like the declarative earnestness of the lyrics, either. I find them to be artless and naive, whereas others, I must surmise, find them to be uplifting, full-throated, open-hearted. Watching a Larson or a Miranda musical, I feel like Royal Tenenbaum at the premiere of little Margot's first play on the night of her eleventh birthday. The characters "don't feel believable to me... What characters? They're just a bunch of little kids dressed in animal costumes. Sweetie, don't be mad at me, it's just one man's opinion." tick, tick...Boom! is Mr. Holland's Opus but thinks it's All That Jazz. Where Fosse was a genius who changed musical theatre for good, Larson is a guy who shouted a lot about being poor and diseased and changed musical theatre merely for the worse.

Larson tears through his relationships and loots the ruins for material. He is a prototypical Bad Art Friend, something estranged girlfriend Susan (a wonderful Alexandra Shipp) realizes when, in the midst of a difficult conversation, she can tell by the dissociation in her solipsistic beau's eyes that he's trying to figure out how to turn their pain into a song. The least he could do was make it a good song. Larson jeopardizes his best friend's lucrative job by being a smug prig in a think tank the friend, Michael (Robin de Jesús), has arranged for Larson to join in order to help him out of a financial quagmire. In response to Michael confronting him, Larson lectures him about being a sell-out. Michael, for his part, talks about how being gay is tough in a homophobic culture, leading to a song. Everything leads to a song here. (Michael's AIDS led to an entire musical that ran for 5,123 performances.) If you like the songs, you're in for a treat. If you're not a fan, you will start chewing your leg to escape before your stomach murders your brain like that guy's did that one time he listened to Vogon poetry. Larson is a sick guy. I don't mean the aneurysm that killed him at 35 on the day of Rent's first preview--I mean his predatory ego.

For me, the great irony of this film is a moment where Larson wails about how all the most successful Broadway shows aren't about anything substantive in the middle of a film that is not about anything substantive, either. tick, tick...Boom! is a justification of working until you're dead and never giving up and not taking advice with humility even when it's Stephen fucking Sondheim (Bradley Whitford) giving it to you. It's a manifesto for struggling artists to destroy their relationships, work to death while disdaining the labour and his coworkers, and reject notes given in good faith because they are secret geniuses waiting to be discovered. All of these messages are ugly and destructive. The numbers are well-staged, though, and the film is shot and edited with finesse. Vanessa Hudgens has a voice that's out of this world; watching her, it occurred to me that the world is full of unbelievably talented people forced to perform bad art. Cats ran for 7,485 shows in its first run. Cats! These jobs doing Mr. Fuzzy McGullicunt are someone's dream come true on the Great White Way. That's not their fault: There's a bottomless appetite for garbage like this--the $8.00 triple-caramel mocha Frappuccino, the sugar-bomb in refinement and culture's clothing. tick, tick...Boom! is about a dangerously obsessive personality who, Moses-like, dies right before he makes it to the Promised Land. The better version of it doesn't celebrate his sacrifice, it asks whether all that human wreckage in the pursuit of fertilizing the faux-working class Gilbert & Sullivan ground that made Dear Evan Hansen possible was worth it.