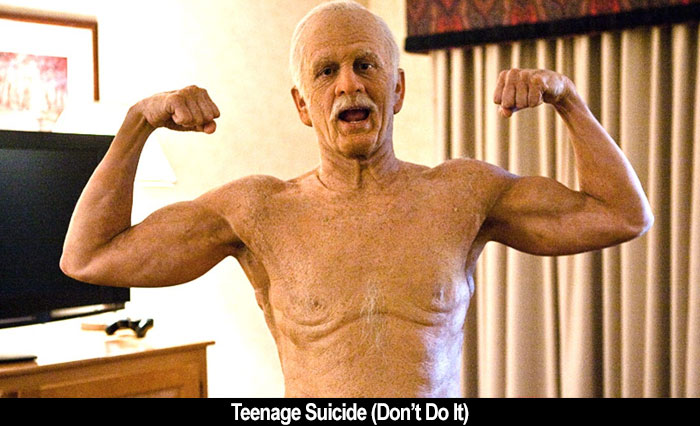 by Walter Chaw Dear Evan Hansen is the Canadian-girlfriend grift, emerging from insecurity and good intentions--that mythological girl from a place far enough away for high-school kids that it might as well be Narnia or Middle-Earth, whose phantom existence affirms you are not as pathetic and alone as you really are. And when your Canadian girlfriend dies by house-fire or moose misadventure, perhaps there's a vein of pathos to be mined there for whatever profit grief allows. It's the illusion of depth for an immature, troubled, frightened kid, common enough that the "Canadian girlfriend" has entered the pantheon of urban fairytales. How 'bout if Dear Evan Hansen had been about the social pressures that harangue Evan Hansen (Ben Platt) into exploiting the death of a deeply unbalanced and complete stranger instead of how Evan Hansen's own terminal thoughts and attempted suicide forgive his sociopathic manipulation of a grieving family and school community? Aye, there's a movie for you--the one where Evan Hansen is a victim and not the hero, and the bad guy is not the truth of his unforgivable deception being discovered, but the overwhelming stricture to conform that weighs especially heavy on adolescents. The sneakiest thing about Dear Even Hansen is that at the end of it all, it's not actually okay that Evan is an outcast. The premise itself is the bully.

Based on an outrageously successful stage musical with a book by Steven Levenson and songs by Benj Pasek and Justin Paul (La La Land), this film adaptation has been described as a way to "memorialize" Ben Platt's performance in the title role, using the kind of language of terminal solipsism that feeds into the self-aggrandizing serial mythologizing of what is essentially a pop-cultural curiosity destined to show up as a poster in Patrick Bateman's pissoir. Ben Platt's performance doesn't need to be encased in bronze and placed upon a marble mantle--it needs a bucket of cold water, which the film's early reception surely is for him and his producer-dad, Marc. I hope it's heeded. The only reason I'm joining the pile-on of unusual vitriol is because Dear Evan Hansen isn't just bad (and it's very bad)--it's the kind of easily-consumable artifact with the potential to do real harm. This is a film that seems destined to become catnip to theatre kids and emotionally-unstable teens, some of whom will see themselves in this lonesome, awkward outcast with a beautiful tenor singing plaintive anthems about how the cure for what ails isn't in the medicine cabinet of pharmaceuticals meant to hammer them into normalcy, but in surreptitiously recording and then disseminating group-therapy sessions through social media, the better to resurrect one's reputation.

Evan is a high-school senior who has one, count 'em, one "friend," a gay kid named Jared (Nik Dodani) whom Evan, because Jared is of apparently East-Indian descent, enlists in a scheme to forge a series of e-mails purportedly exchanged between Evan and the recently-deceased Connor (Colton Ryan). (Those guys are tech-savvy, after all.) Dear Evan Hansen is only racist in passing, though. The real problem with it is how Evan trafficks on the misunderstanding that he was friends with Connor and not a victim of Connor's random psychotic bullying in order to get romantic with Connor's sister, longtime crush Zoe (Kaitlyn Dever), and be emotionally adopted by Connor's parents, Cynthia (Amy Adams) and Larry (Danny Pino). He does have a mom, nurse Heidi (Julianne Moore), who does her best to get Evan the therapy and support he needs while working double-shifts to pay for it. Moore, it bears mentioning, is in an entirely different movie. Every scene with her is a jarring reminder that Dear Evan Hansen is facile trash because Moore does not treat it as such. Neither does Dever, who deserves so much better than to be sat opposite Ben Platt and his collection of coded mannerisms that I think he thinks communicate Evan's social anxiety but, between the inability to make eye contact and the self-soothing compulsions, suggest instead that he's somewhere on the spectrum. His performance is offensive, is what I'm saying. What his character does is also offensive. Evan only comes clean when he's forced to come clean, and then everyone forgives him. This isn't a sensitive, emotional exploration of suicide among a threatened, neurodivergent demographic--it's a treacly YA romantic comedy of delightful misunderstandings. It's fucking gross.

The lowest moment in a film that is all low moments comes in an early number as Evan and Jared jauntily compose a series of fake notes Evan and Connor have supposedly been passing each other through "secret" e-mail accounts (this in a world where Snapchat exists), and the undead phantom of Connor is resurrected to sing their literary deceptions. Jared jokes about Connor writing how he's rubbing his nipples erotically and Evan tells him to get serious, but Connor--you know, his corpse that they're playing with--has already sung it. This is humour, or at least what passes for humour, in Dear Evan Hansen. It's grotesque, vile, and has about it the stench of necrophilia; Connor's getting fucked. At an assembly of the kind Heathers has already properly lampooned, where the callow school administration and self-obsessed students gather in the socially-mandated ritual of fake-grief, Evan delivers an uplifting message about how if you're depressed, just wait long enough and something good will happen for you. His sentiments go viral, as depicted via screenshots that eventually coalesce into a mosaic of Connor's face. Dear Evan Hansen, you see, is doing exactly the sort of thing Evan Hansen is doing, meaning that even though it's unforgivable trash, it's at least meta about it. Also meta? That it's so overwrought it plays like a depressed teen actually wrote it. If the songs, free of context, can or did help someone decide not to self-select one lonely night, maybe it was worth it. But you could say the same of any song, couldn't you? Try "Fire And Rain."