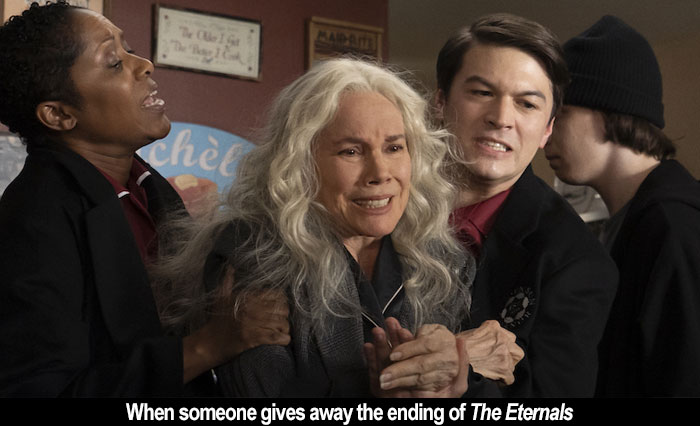 by Walter Chaw Edited like a dog would edit something in a room full of tennis ball-throwing squirrels, Axelle Carolyn's The Manor is terrible by almost every standard measure of quality. Carolyn's own script is tediously overwritten, weighed down by goth-with-a-clove-at-the-all-night-coffee-shop-cum-bookstore notes like, "Oh, wormwood!" and, "I don't know plants but I do know absinthe!" and ironic jokes about Elizabeth Bathory. The only thing missing is a dramatic recitation of a line from "Troilus and Cressida," a red rose held in a harlequin's flourish, and an invitation to a game of chess. Yet despite all the smug listing-off of genre bona fides, all the strained lines and lines upon lines, it still leans heavily on a hilarious bit of exposition obviously inserted in post ("It's your fucking hair, Roland!") at the end as if the lead up to this moment weren't already extravagantly, explicitly spelled out, pitched to the most disinterested student in class. At least one of the alleged jump-scares is telegraphed by the reaction shot before the scare, and all that broaching of serious subjects such as elder abuse in nursing homes, dementia, and privatized healthcare for profit is handled without the slightest hint of the emotional intelligence necessary to deal with them in a substantive or respectful way. Honestly, it would be more offensive if it weren't so clearly the product of incompetence. I don't even know why it's called "The Manor."

Probably it's the name of the nursing home that spry septuagenarian Judith (Barbara Hershey) checks herself into after suffering a minor stroke from the quick cuts and unmotivated camera swoops of the bucolic backyard party sequence that opens the film. Here, she meets horny Roland (Bruce Davison), who thinks it's funny when the resident black cat/harbinger of death scares the crap out of residents who aren't doing too well. Judith's poor roommate Annette (Nancy Linehan Charles, in the film's most thankless role--which is saying something), for instance, who, before she kicks the bucket for real, is visited a few times by a shadowy figure and then passes off a list to Judith with names written on it. Get this, hold on to your hats: Judith's name is on it! And the other names? The ones crossed off? They're all dead! I want to say it doesn't take Kreskin to Nostradamus people dying in a nursing home but, you know, it doesn't. Anyway, this convinces Judith that shit's going down. Remember how great Bubba Ho-Tep was? It was cool. The premise of this thing is that there's something supernatural going on and you figure it out immediately when there's a "Kick the Can" moment one night on The Manor grounds with a half-an-hour or so still to go, but given that, why would Annette know the order of the harvest? There's also a line where Judith's 17-year-old grandson, Josh (Nicholas Alexander), talks about "Wicker Man magic," except that, no, it isn't. This is knowledge I have because I have also seen The Wicker Man.

Hershey is very good as Judith, doing what she can with the material as written. Davison is very good, too, as he tends to be. There's a scene where his Roland makes an unwelcome pass at Judith and his horror at misreading the situation is as charming and mature as Judith's kind rejection of him. When things go wrong later, I wondered if they were going wrong because Judith rejected Roland. That would have been interesting, wouldn't it? How about letting these two actors be in a real movie together some time? They could work through the difficulties of late-life grief and loneliness, the horror of aging and becoming irrelevant, the terror of losing one's mind to the inevitability of years passing beneath the proverbial bridge. I bet they would play the shit out of it. Instead, here they are in the manor in The Manor, sandwiched between awkward references to Suspiria and tonally off cracks about facelifts, like Odysseus sailing between Scylla and Charybdis. See? I can do pretentious references, too. Me and Sting. The Manor isn't about what happens to old people sometimes in nursing homes, nor is it about how people treat the elderly like children. And listen, I appreciate, sort of, the casting of an Asian guy (Andrew Tinpo Lee) as the Charles Grodin character from Rosemary's Baby, except I really don't because don't do me any favours. Casting an Asian as a doctor isn't exactly burning down the establishment, and the Charles Grodin character in Rosemary's Baby is a dick besides.

While we're at it, I don't understand why Judith's daughter/Josh's mom Barbara (Katie Amanda Keane) is written as so brittle and angry a person. Does it have something to do with the death of her father? Is she mean to Judith because she holds Judith accountable? Is Judith withholding of affection? It doesn't seem like it. Maybe she's angry because Josh has a better relationship with Judith than he has with her. I guess it would matter more if The Manor were more interested in any of the things that make these relationships tick than in being the world's most boring rip-off of The Guardian. A good thing to come of The Manor, though, besides giving Hershey another starring role, is that it made me want to revisit Sidney J. Furie's The Entity, which, let me tell you, is a fucking banger. It takes off like a shot, takes no prisoners, features an absolutely savage score by Charles Bernstein, and is scary as hell. Hershey is incredible in that incredible film, and better yet, The Entity is even based on one of the most notorious hauntings in the recorded history of such things. Unlike The Manor, it confronts its difficult issue (violent rape) head-on with unadorned depiction and the serious traumatic aftermath of it. Unlike The Manor, and crucially, it has a clear idea of what it's about and why not being believed is in certain situations worse than any kind of supernatural visitation. Not every movie has to be about something, but every movie is: either because it addresses it, or doesn't, or isn't capable and got made anyway. Opportunity is only that when there's a framework for success. Without one, it's just giving someone a picnic basket and pointing them at the woods.