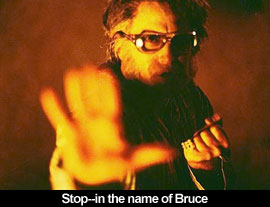 by Walter Chaw Joe R. Lansdale is best known for his tales of the "weird west," a genre mixing splatterpunk with alternate-history western almost entirely defined by the author in the early-Nineties. His work reads a little like the sort of folklore in which Mark Twain dabbled (or the gothic in which Flannery O'Connor was involved), but with zombies and gore, while Don Coscarelli's Bubba Ho-Tep, an adaptation of a Lansdale short story, is steeped in the same sort of bent sensibility that informs the author's work, performing something like a masterstroke in casting Bruce Campbell as Elvis and Ossie Davis as JFK--if ultimately falling a little short of the astonishing audacity of Lansdale's prose. (That very ballsiness what has kept any film prior to this one being made from Lansdale's work, methinks.) What distinguishes the picture, however, is what feels like a genuine concern for the difficulties of aging and the aged, a melancholy tone to the proceedings that, fascinatingly, equates a mummy unquiet for being buried nameless with a pair of American folk heroes declining, also anonymous, in a retirement facility in East Texas.

Elvis (Campbell), having switched identities, "Prince and the Pauper"-like, with an impersonator just prior to the impersonator's overdose at Graceland, is rotting away in a third-rate rest home, with his only believer a black man who insists on identifying himself as Jack Kennedy (Davis). Saddled with a bum hip and a case of the impotents, Elvis feels a fluttering down below like "a pigeon having a heart attack," and realizes that the possibility that a soul-sucking mummy is stalking the good residents of God's waiting room has given him a new lease on life.

There's a moment in Bubba Ho-Tep where I realized that I wasn't questioning the premise as much as I was rooting for Elvis and JFK and their battle against the supernatural. What works about the picture is its positioning of two mythological figures in essence against a mythological figure in fact--consider that there are three "kings" in the picture: The King, JFK of America's Camelot, and the mummy "Ho-Tep." The picture is on one level, then, a conversation about the monumentalist role of myth and superstition in our lives, a concern that seems to be cropping up often in this year's films (Master and Commander, The Missing) and one handled in this picture with a surprising seriousness. Paul Simon's question of where has he gone, Joe DiMaggio, speaks a little to why Bubba Ho-Tep works--a beleaguered nation turning its lonesome eyes to the heroes of our collective past.

Campbell is better here than he's possibly ever been, giving his decrepit King a kind of sadness that makes Bubba Ho-Tep's piquant resolution resonant. Not really a horror film, it isn't much of a thriller or comedy, either, but it can be (and is best) read as a lovely fantasy, a portrait of the elderly all steeped in regret (heartbreakingly, JFK says at one point, "I guess neither of us were the parents our children needed us to be"), and the warm idea that it's never too late to fulfill promise and justify legend. If not for a few puzzling decisions (one woman's kleptomania; a pair of flashbacks, one sort of amusing, both distracting with too much useless information), Bubba Ho-Tep would be tighter and more profitably mysterious. As it is, the picture is a short time spent in love with an amiable whimsy, dedicated to a period and an audience almost entirely neglected in our popular culture and fashioned with conviction and no small measure of respect. Originally published: November 21, 2003.