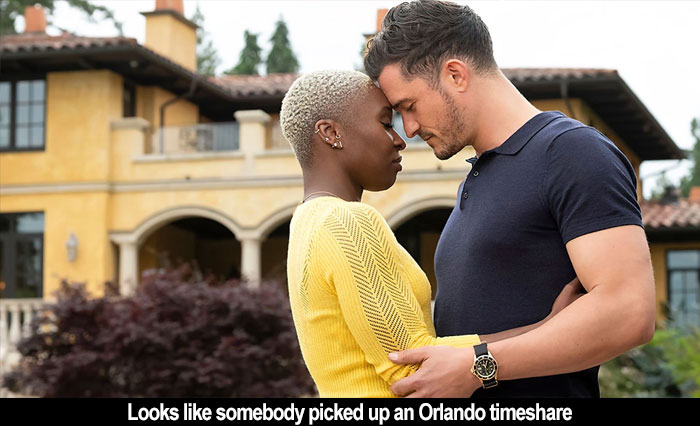 by Walter Chaw A cautionary tale about writing something whilst in a state of forced, artificial love-drunk, John Ridley's Needle in a Timestack is this year's Serenity: a film so intensely invested in its adolescent feelings that it's headed towards a specific state of camp immortality. Nick (Leslie Odom, Jr.)--because "Nick of time," get it?--is married to Janine (Cynthia Erivo), and they're that kind of The Notebook couple who speak to each other as though they were scripted by Nicholas Sparks, who, let's face it, on the Stephanie Meyer scale of cultural whoopsies, can barely string three words together. "Dance like no one's watching," someone moans in a high state of agitation. "Love is a closed circle," someone else declares; between that and "True Detective"'s "time is a flat circle," circles are doing a lot of heavy lifting in the realm of purple overwriting. In this future as imagined by a perfume commercial, time travel is a recreational lark indulged in by the hyper-rich, causing occasional "time waves" that wash over the world like the exact same visualization of the exact same concept in A Sound of Thunder, a film so terrible that your body's autonomous defense mechanism has already largely expelled it from your memory. That film, like this one, is based on a classic science-fiction story: Ray Bradbury there, Robert Silverberg here. The concept of "based" is doing a lot of heavy lifting in this instance, too.

Nick and Janine are so in love they see their relationship as a universal imperative. At least Nick does, because Nick is a creepy, control-freak gaslight dispenser who believes that Janine is a thing that belongs to him. He worries every time there's a time wave that someone is fucking with the past in order to steal Janine away from him, Janine being perfect, immaculate, a goddess infallible, the incarnation of light in a dark world, photographer of strangers' children, grower of a great set of nails, lover of dogs and cats both. Sometimes Nick pretends that he doesn't know her so he can stare at her from across the room and wonder to himself if he would love her even if he didn't know her, but of course he would--everyone loves Janine. And everyone wants to take Janine away from Nick. Janine is a thing. More than a thing, she is an It we objectify along with Nick. In place of a personality and soul, she is given soft lighting and gentle protestations of Nick's red-flag, isolating, abusive behaviour. No, it's romantic, dummy--except it's only romantic in romantic comedies and romance novels. In the real world, Nick should be chemically castrated and shackled to an ankle monitor that tracks his movements. Tommy (Orlando Bloom) is a rich, white bastard who also loves perfect, sublime Janine. One day, after a time wave, Nick wakes up to find himself in bed with Alex (Frieda Pinto), an unimaginably beautiful substitute for Janine who, boy, sure is no Janine. So Nick goes back in time to break Alex's heart and leave a stalker letter for Janine in a quest to get her back. Because, in case you've lost the thread, Janine is his.

We're made to understand that altering the future is a crime, but what doesn't alter the future? The movie specifies that altering the future is only illegal if it messes with someone else's timeline--except doesn't everything alter someone else's timeline? It then implies that it's only illegal if someone notices their lives have been altered and raises a ruckus, but then the film says memories are erased once changed in the past, so what the fuck is anyone talking about? Though paradoxes in time-travel movies are nothing new, why even ask the question if you're not prepared to answer it? The time stuff is handled fast and loose, which is fine because I think it's all meant to be a metaphor for Time, i.e., an Eternal Sunshine of the Spotless Mind dealio; Alex says it best: "Don't regret the past... The past brings us to where we need to be." Alex isn't particularly insufferable, incidentally--everyone talks this way in Needle in a Timestack. It's like a terrible plague has swept through the future and infected everyone with Lyttle Lytton Syndrome. Anyhow, Nick fucks with the past, Tommy fucks with the past, both of them fuck with the past, the better to position Alex and Janine exactly how they want them for the stirring conclusion at a cocktail party that will launch a million memes and smart-ass GIFs if anyone ever gets over making fun of the title and actually watches this movie. It's like that swirling dance scene in Titanic but for almost two hours.

There's more, like the raspy-voiced Asian best friend, Zoe (Jadyn Wong), who has a Portuguese bestie named Sibila (Laysa de Oliveira) who only speaks Portuguese, but Zoe loves her--like, loves her loves her, although she only ever refers to her as her best friend. They do a lot of outdoor sports together like rock-climbing and cliff-diving, and Zoe jokes that she should finally learn to speak Portuguese, the better to communicate with this woman she obviously, embarrassingly adores. Sure, but why break the spell, amirite, guys? Best to put a woman you love up on a pedestal where pure silk can stream out of her ass and rose petals can fall from her lips without those awkward conversation parts where you have to, you know, talk to her like she's a human being with thoughts and opinions. Needle in a Timestack makes it clear that women are incapable of making good decisions on their own. They end up with the wrong people and sometimes even end up dead. It's imperative that women be guided from the future by men who are obsessed with them as things, you see, because Janine belongs to Nick and Alex belongs to Tommy and Sibila belongs to Zoe, who isn't a man, but sure is creepy enough to be one. I guess what I'm saying is that Needle in a Timestack is atrocious, though if you're interested in an instantly dusty artifact that's fun to scream at for a couple of hours, hey, I'm sure you'll be able to do so soon enough.