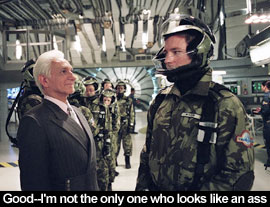 See, when someone inevitably "steps off the path" and squashes a butterfly that seems to have a real serious death wish (what the $80M production really lacks is an ounce of ingenuity, as not only are CGI cars set on a short loop, but the f'ing butterfly keeps flying under boots as well), he sets off "time waves" that, tsunami-like, sweep over Chicago, causing the mutant evolution of progressive kingdoms of creatures. Start with the bugs, end with the humans, giving our heroes about a hundred minutes of interminable screen time to go back in time before the first expedition to warn them, again, about staying on the path. It begs a few questions, of course, like if that kind of overlap is possible and Ryer's been going to the same moment for years with a retinue of clients, wouldn't there be a logjam of hundreds of hunting parties all piled up on one another? Or why doesn't Ryer just teleport back to before they leave the facility, to that morning at home? At some point, of course, the tiny portion of the audience that hasn't gone in search of a refund figures out that even bothering to punch holes in this film makes them the stupid ones.

It's tempting with something like A Sound of Thunder to play the iconoclast and laud it for its wacky "Land of the Lost" retrograde special effects, its toxic pustule of a screenplay (when you bring in the writers of Sahara (Thomas Dean Donnelly and Joshua Oppenheimer) to fix a script by Gregory Poirier, the guy who wrote Tomcats, you know you're in deep), and its chutzpah in hiring Peter Hyams, possibly the worst all-around director still getting moderate budgets in the United States. Tempting, but not credible, because there's not really even any camp pleasure to be derived from Ed Burns's agonizingly protracted goodbye to potential stardom, Ben Kingsley's really bad wig, or the half-baboon/half-lizard beasties that pass as these filmmakers' idea of a possible evolutionary track for iguanas or chimps. If you go to it just to mock it, you could have a pretty fair time of it, I guess, but without getting too in a clinch about it, let's just say that you'd be shooting fish in a barrel. Though A Sound of Thunder is the kind of monument to bad cinema that attracts people who get off on hating movies in droves, my reaction to it is complicated: On the one hand, I'm sort of glad to see all the assclowns involved in greenlighting this mess take one right square in the pocketbook, and on the other, I sort of wish that one of my favourite Ray Bradbury short stories from childhood wasn't turned into this colossal turd. Originally published: September 7, 2005.