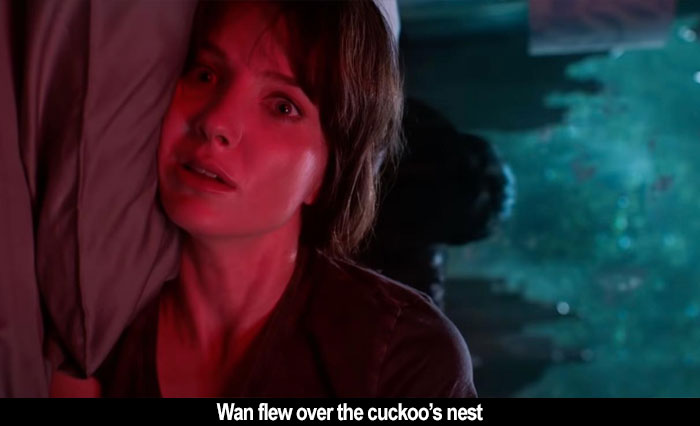 Maddie (Annabelle Wallis) is an abused woman late in another pregnancy after having suffered a series of miscarriages. She's survived a break-in at the house she shares with her boyfriend, but it's left her childless again and her thug of a man dead with his head at right angles to his body. The pathologist is puzzled by handprints on his neck indicating that whoever killed him was hanging from the ceiling, and here's Maddie, bed-ridden, being consoled by actress sister Sydney (Maddie Hasson) and grieving her losses. Oh, and Maddie's nursing a wound on the back of her head that doesn't seem to want to heal. Malignant sets itself up as a bit of Rosemary's Baby maternal paranoia or maybe an Inside-esque extreme showdown featuring a woman driven mad by her violent childlessness, but it turns out to be heedless of boundaries as it cruises along with a sense of infectious freedom. The picture's charm, in the end, is that very exhilaration: made all of energy, it leaves one energized. In a field of films carefully measured and screen-tested to a lumpen grey sameness, Malignant pulls no punches. The last time a major-studio big-budget release left me feeling like this was Paul Verhoeven's Total Recall. Not for nothing does Malignant share a couple of far-out visual concepts with that film.

Turns out, Maddie is an orphan a kindly family adopted as a child from an "orphanage" that is more of an asylum, one where an evil entity called "Gabriel" has figured out a way to communicate through broadcast channels, electricity, and telephones, though we don't learn until later exactly how he manifests. He knows, too, how to murder people in inventive, discomfiting ways. When he materializes in the middle of a holding cell featuring the entire panoply of '70s exploitation extras, it's one of the most pleasurable moments of the film not just for the volume and atrocity of the kills, but for the deliciousness of its build-up. This is a movie that reminded me of the morgue sequence from Re-Animator in addition to, somehow, both Freddy Got Fingered and Blood and Black Lace. As I play the film through again in my mind, the urge to keep listing movies is out of less dutiful recitation than constant discovery. Even the villain's lair reminds me a little bit of the figure-in-red's hiding place in Don't Look Now. I don't know how much of that is intended and it doesn't really matter; Malignant had me participating in its acts of reverential recreation.

Malignant is a film completely free of pretension, although it is not free of subtext. There's meat here in its excoriation of multiple systemic abuses and attitudes--in its acknowledgment of the toll of domestic abuse, the difficulties in adopting troubled children, and the extent to which the police are swayed by sexual bias. But, and in sharp contrast to too many films lately, its subtext is wholly so while its execution remains alive, light-footed, and, above all, fun. Unpacking the title, though, reveals how Malignant grows in the rearview. Yes, the last 30 minutes are the first drop on a rollercoaster after a long ratcheting-up--but look how invested we've become in Maddie, and how Gabriel has had a hand in the failures of her pregnancies. That connection by itself speaks volumes about sibling dynamics and the jealousies that can lurk in a lifetime of grievance. Maddie attempts to deny her past and her past imposes itself all the same. Meanwhile, her sister Sydney demonstrates a touching fidelity to her, placing herself in peril to discover the secrets Maddie's been keeping, especially, from herself. "Malignant" refers to the pieces of our traumas sitting in our subconscious like undiagnosed cancers. Using a kaleidoscope of genre touchstones, Malignant even suggests that our immersion in horror is therapy of a sort for the genre student and fan. We take impressions from these pictures and create a mosaic--a quilt, if you will--that we pull around ourselves to make sense of what is essentially senseless. Those looking for a connection to Wan's Aquaman can find it there in Malignant's shocking depth, shimmering beneath its ebullient surface pleasures. It is a checklist if that's what you're looking for--one written on the back of a thesis about what it means to be broken and, more, what it means to survive.