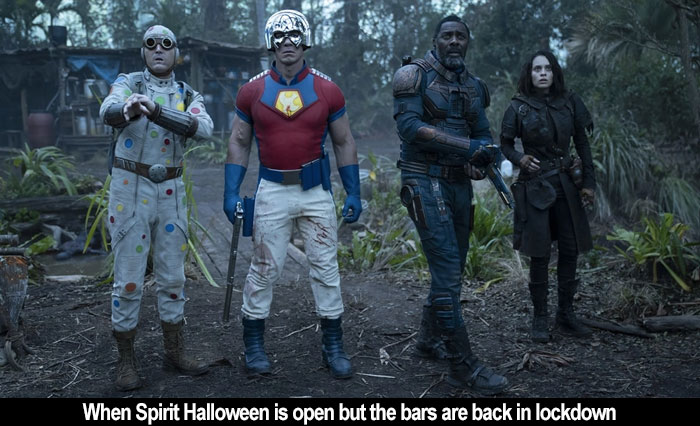 by Walter Chaw James Gunn's The Suicide Squad is weird. It's explosively, hilariously gory, profane, ridiculous, and, best of all, lawless. As much as I love Christopher Nolan's Dark Knight trilogy, the darkness--the grittiness--he brought to the DC Universe has proven difficult to shake due to its commercial success. In contrast, The Suicide Squad looks and acts a lot like the Adam West "Batman" TV series, a piece fully embracing the elasticity of both its mediums and, though it seems silly to say, one bracingly unafraid of literal colour. I also felt this way about Gunn's still-dour-but-colorful-by-MCU-standards Guardians of the Galaxy--but this film feels very much like something, from character and production design down to the choice of members for the titular squad, allowed to be whatever it was going to be, damn the torpedoes. Have I mentioned that it's weird? It's exquisitely strange, and not just because of the obvious ways in which things are strange, but because it says the bad guys are the colonial-/meddling-minded United States, the military-industrial complex is reliant on the enslavement of the carceral state, and the best test of manhood is not facility with firearms and sociopathy. A billion-dollar IP that isn't trying to skate the middle line of absolute, frictionless equivocation? Weird, right?

Amanda Waller (Viola Davis) is the humourless director of a secret squad comprising a rotating cast of the stupidest, most unbalanced supervillains, who agree to do her bidding on impossible missions in exchange for ten years off their eternal sentences. Plus, they get to see the world! The film begins, spoiler, with an iteration of the Suicide Squad deployed as collateral diversion in a sequence that demonstrates faithfulness to the concept as well as recognition that David Ayer's version had to die for this one to live. The first squad is smartly-written and developed enough that we understand the rules of the game. They function as a James Bondian prologue, and in that construction, the real hero of the franchise is Margot Robbie's Harley Quinn. If she is the future of the DCEU, it's in good hands. Joining her for the sequel are Bloodsport (Idris Elba), who has great aim, an estranged teen daughter (Storm Reid), and the opportunity to penetrate the island fortress of mad scientist Thinker (Peter Capaldi)--where, for the last 30 years, he's been performing horrifying experiments on a skyscraper-sized, cyclopean, Day-Glo starfish from outer space that incorporates humans into its hive mind in much the same way the brain slugs do in "Futurama." Joining him on this suicidal pursuit are Harley Quinn (Margot Robbie), King Shark (voiced hilariously by Sylvester Stallone), The Peacemaker (John Cena), Polka-Dot Man (David Dastmalchian), Col. Rick Flag (Joel Kinnaman), and Ratcatcher 2 (Daniela Melchior). It's tempting to talk about what each of these characters' special powers are--sufficed to say, what gifts they possess are largely metaphors for unresolvable issues stemming from their parents' best attempts to keep them safe. Peacemaker, however, is a satire of a specific kind of militant patriotism built on self-righteousness and a sense of nationalist ends justifying every means. Topical.

Also topical is the idea that the United States is actively interfering with every country it is strategically advantageous to destabilize and has a legacy of doing so stretching back decades. The Suicide Squad is by its nature about secrets and exploitation. And it's about people getting dismembered in imaginative ways. I love a scene where Harley notes some red flags with a new suitor and makes the healthy choice that she's better off alone--and another where eruptions of flowers and animated birds accompany one of her psychotic rampages. Disney Princesses, eat yer hearts out. Also fantastic is Ratcatcher 2's "Ben" skill of being able to control rats, leading to a flashback involving her dearly departed dad (Taika Waititi) wherein emerges a central theme of the film: how can all lives matter if those of the smallest, the most overlooked, the most derided and oppressed among us don't? It's a deeply political work, in other words, something that's easy to overlook because the rest of it is so fun. I laughed longer and harder watching The Suicide Squad than I have in ages. It's funny because it's unrepentantly absurd and, in the process of being absurd, it highlights the absurdity of these Übermenschen fantasies being the central means of expressing our dystopian zeitgeist.

Most impressively, to me, The Suicide Squad manages to steadily ramp up the scale and imagination of its set-pieces through to a solution to its BigBad that is as horrible as it is fair, given the rules established by this universe. The picture manages, too, to be consistently surprising and innovative in manifesting its imagery, and it evokes real pathos across multiple storylines while remaining unsentimental on the surface. (Of all the things I didn't expect from The Suicide Squad, getting a little misty watching a rat in a harness swim towards what is likely a heroic death has to be pretty high up there.) It's that rare thing that is unquestionably excessive to the point of obnoxious (King Shark spends a good portion of the end of the film gnawing on a human skull) that allows each of its huge cast time to establish motives and depths (all King Shark wants is some friends). It follows the Snyder cut of Justice League as a film that similarly understands how superheroes are America's kaiju-eiga, i.e., our reaction to a collective loss of security in the world through the creation of capricious, uncontrollable beings who are sometimes heroic, sometimes villainous, always destructive. The Suicide Squad is evidence that being bound to IP doesn't mean your piece needs to be a thin, paste-like gruel intended for easy replication and mass consumption. There's life in it, a fighting spirit. I didn't think I'd have fun with a movie like this again--a huge-budget Mystery Men aiming for, and nailing, its hard-R. More, please.