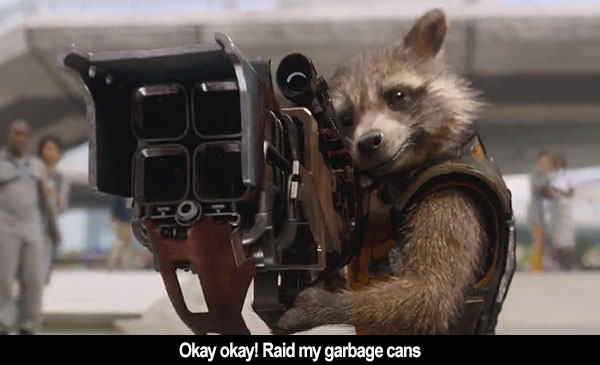 by Walter Chaw After years of looking for a Star Wars for my son (too little for Lord of the Rings; nothing to attach to in Pacific Rim), here's James Gunn's awesome Guardians of the Galaxy to fit the bill. It's science-fiction in exactly the same way that Star Wars is science-fiction--essentially a serial western, with Chris Pratt as both Luke Skywalker and Han Solo, green Zoe Saldana as Princess Leia, and a raccoon and a tree subbing for Wookiee and droid. It has a secret history for our hero, a scary baddie in a black cloak, and an entire universe of wonders it treats like an amusement park. It's also fun in the same way Star Wars was fun, and fresh in the same way, too: heedlessly, carefree, even bratty, which explains the post-credits cut-scene that's easily the best of them. Furthermore, it has a soundtrack packed with AM Gold that lends the picture camp and hipster cred simultaneously. Heavy on exposition at times, squandering a few opportunities to demonstrate a better team action dynamic, and not about anything at the end of the day, Guardians of the Galaxy's sword and shield is that its irreverence and self-awareness land as self-deprecating and warm. Doesn't hurt that it's a blast.

Outlaw Peter Quill (Pratt) likes his Blue Swede and his pop-cultural touchpoints (no fair telling, but I did love a subtle shout-out to the "Tholian Web" episode of the classic "Star Trek" TV series). He's a ladies man, and a thief, and when he steals a metal MacGuffin-ball coveted by world-destroyer Ronan (Lee Pace), he's thrown into a Seven Samurai sort of thing with assassin Gamora (Saldana), vegetable Groot (voiced by Vin Diesel), vermin Rocket (voiced by Bradley Cooper), and literalminded muscle-head Drax (Dave Bautista). That's it. John C. Reilly and Glenn Close have fun cameos; there are pew-pew-pew space battles and mad chases; there's a prison break, Benicio Del Toro as Jim Jarmusch, and even a sword fight. It's got everything. It's good-naturedly funny, gives each of its characters a signature moment, sets up the sequel like Star Wars sets up The Empire Strikes Back, and, yeah, oh man, that cut-scene. Guardians of the Galaxy is essentially the perfect film for both my age group and my son's age group, making it, in that sense (and cover your ears), better than Star Wars.

Star Wars was the first film I saw in the theatre. I was three and didn't speak a word of English. I'll always love it, but frankly it was better that way. Guardians of the Galaxy is witty and, on a second viewing, surprisingly tight. First time through with a packed screening audience, there was too much laughter and applause to appreciate the care. The movie allows Saldana to do her tough/vulnerable bit; Pratt to do his sincere idiot man of action; an animated raccoon to steal a few scenes; and an ent to have the emotional climax of the whole affair. If the final battle is a touch predictable, if the villain/s are lacking in ambiguity, if it indulges in the same city-destroying as too many films have lately, if it doesn't leave enough beats after its money lines so that an enthusiastic audience doesn't drown out key exposition (per Billy Wilder), well...there are worse crimes. "Space opera" is the most accurate description; prototypical blockbuster's another good one. Guardians of the Galaxy is the capper to a strong summer of creative, innovative mainstream entertainments. It's not perfect, but it is awesome--and I'm good for at least another two or three screenings with the kids, just to make sure.