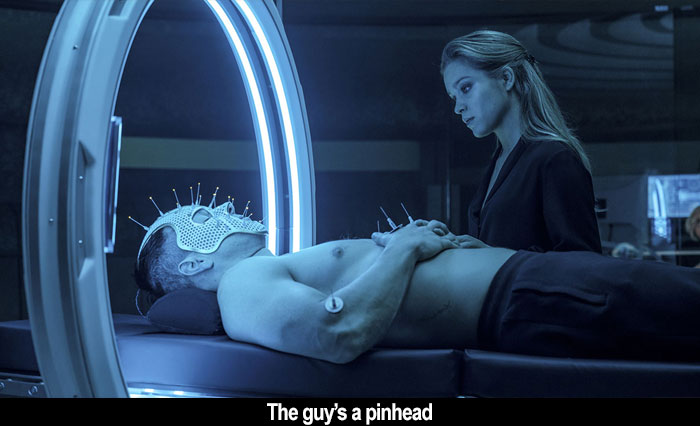 by Walter Chaw At the root of it all is the Cloud Atlas suggestion that any number of spiritual roads end in a white-saviour persona. Which is offensive, of course, a non-starter in the modern parlance, one would hope (if one were an optimist not paying attention), made that much more offensive for said white person being convicted felon Mark Wahlberg. It was a long time ago; he served 45 days of a 3-month sentence, he was amped-up on PCP and racism, and, hey, the only people he wronged were Black children and an Asian man he beat blind with a stick. Wahlberg made a nice career for himself as an ass model despite this and got popular enough to become the butt of one of the most exquisite pop-cultural takedowns in recent memory as Andy Samberg formulated Wahlberg's entire persona into a single sketch. Wahlberg, of course, doesn't owe me anything, but when you reach a certain level of success, it's not enough to make apologies--it's time to make amends. He did try to get the felony assault wiped from his record in the hopes that he could secure a liquor license for his hamburger restaurant, though, so there's that. The American Dream.

In Antoine Fuqua's Infinite, Wahlberg is Evan, a down-on-his-luck, unemployed restaurant front-of-house manager who takes lots of medicine he can't really afford to keep his violent schizophrenia at bay. He does run out, so the second thing referenced in Infinite is Total Recall, wherein this workaday schlub is either a secret superhero or just having a psychotic break. The first thing referenced in a loud prologue is The Fast and the Furious, with a couple of nice cars zooming around for a while before exploding. We know, based on an extended voiceover introduction, that these street racers/spies are maybe the past-life incarnations of the characters we're about to meet in Infinite, and that what's at stake is nothing less than all life on Earth, here threatened by a gizmo called "The Egg" that villain Bathurst (Chiwetel Ejiofor) hopes to set off, thus ending his torment of eternal lucid reincarnations. Probably not on purpose, Infinite is now referencing Douglas Adams's Agrajag, who has been killed countless times, never on purpose, by Arthur Dent. Evan, you see, is the end-product of centuries of other people--some Black, some Asian (the martial arts ones); as he gets off the meds, he starts remembering what he's learned in previous lives as, often, other races. This is a lot like the multiple-dimension thing of Jet Li's The One, in which...oh, never mind, it hardly matters, because to present Mark Wahlberg as the repository of Eastern thought makes me want to scream.

Evan has a "Hattori Hanzo" sword that he forged himself as a hobby--like pottery or watercolours, except this one he learned when he was Japanese, you see. Oh, and he's a master swordsman who doesn't understand this gift, like Connor MacLeod of the Clan MacLeod. I liked this better in The Bourne Identity, and I liked it a lot better when it was The Long Kiss Goodnight. I probably would have liked all of it better if it weren't Wanted fan fiction, a puerile male fantasy. Bathurst is the head of a group called "the Nihilists," which, sans Flea and Aimee Mann, are not as funny, if equally misguided. He's invented a technology where he can freeze someone's consciousness onto a microchip, making one wonder why he doesn't do that to himself in lieu of killing everything with DNA. (Because he's a fucking nihilist, you idiot, pay attention.) The good guys are led by bookish, gnomic Porter (Toby Jones), one of those chaps ensconced in a leather-and-bookshelf study from which he dispatches his "Trinity," Nora (Sophie Cookson), to track down the handsome, Bostonian sword-maker before the bad guys who don't care about anything do. I can't believe I'm still talking about the plot. Wait: Evan can't access his complete memories because he tried to kill himself as a kid and got a metal plate in his head as a consequence, which is the second time mental illness is used in this film as a kind of superpower. You won't believe what happens when someone tries to shoot Evan in the head. That's right: probably the same thing that would happen if someone, God forbid, tried to shoot Mark Wahlberg in the head. Better to aim for a vulnerable spot.

One could go on about the essential lack of innovation driving this cynical vehicle, or opine that at least it's not a pre-existing IP--though while it's true that it's not from a single identifiable IP, it is, in fact, multiple easily-traced IPs mushed together. One could be unkind about Wahlberg's "say hi to your mother for me" lunkishness (matched and somehow surpassed by Cookson's alarming choices), but best to focus in on actor Liz Carr, who plays brilliant Garrick, a scientist on the good-guy side with effervescent energy and an obvious and keen wit. She enlivens every scene she's in and manages to make an awkward bit of self-congratulatory grandstanding about her arthrogryposis multiplex congenita seem almost justifiable in a movie that is one bad turn after another. Far from wanting a sequel with this character, I want many other films with Carr in them. She's so good that she puts to shame the people in this who are phoning it in or playing it fast and disrespectful. Another paycheck to them in a knockoff none of them could have thought would be great (save Wahlberg) is, for Carr, her moment to prove something. And she does. She proves she's too good for this. So are the rest of us.