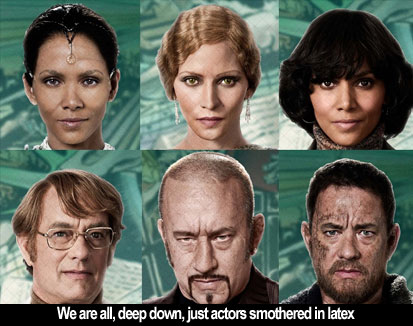 by Walter Chaw It speaks to the extraordinary hubris of the tripartite godhead behind Cloud Atlas (the Wachowskis and Tom Tykwer) that in the middle of a 172-minute film composed of interminable exposition and multiple timelines, they would invoke long-winded Russian prisoner Solzhenitsyn without fear of ironic reprisal. More, it speaks to their hubris that they would make a film this sprawling and messianic about the Disney maxim that you're never too puny to change the world, so don't stop trying, tiger! If you're at all offended by white people doing the "ah, so" thing in yellow-face, by the way: relax, because there're also white people doing the evil Fu Manchu thing in yellow-face. What there isn't is white people doing blackface, suggesting that if you're about to make the argument that Cloud Atlas is about how we're all the same under the skin to the extent that we could have been different races in past and future lives, then don't bother. That doesn't stop the movie, though, from talking about the evils of slavery with a super-duper, plantation-attitudes-changing Magic Negro, or from positing a future-Korea that clones wage-slaves before paying off never-accidental post-modern self-referents. If you were to take Cloud Atlas remotely seriously, in fact, you'd have to address it as an attempt to create a completely post-modern artifact in a world that didn't already have "Beavis & Butthead". Quick, look, the author of that manuscript the old editor in the 2012 timeline is reading was written by the kid from the 1973 timeline who had a crush on one of the black versions of Halle Berry (the one playing Pam Grier)! Did I mention that Berry has a timeline in whiteface? Or that Hugo Weaving and Ben Whishaw have ones in drag?

Rather than detail the various story arcs, better to say that each sees otherwise-inconsequential people deciding at some point to do something with their lives. Cloud Atlas is about taking chances and leaving a legacy--an idea that John Ford expressed more eloquently, and wordlessly, with a pebble creating a ripple at the beginning of a lovely thirty-second sequence in Young Mr. Lincoln, 73 years ago. The picture is also about how the same people continue to intersect with one another across centuries in myriad incarnations, a conceit done elegantly in one timeline in which Tom Hanks, in a bad blonde wig (no, not that one--the one that looks like a Ken doll), falls in love with a black Halle Berry and wonders how he could have, given that he's just met her. If you really want an entire movie about that, I recommend Dead Again. Or any of the Draculas. Or that episode of "The X Files" that makes me cry. There's also an Aeon Flux timeline with beautiful clone Sonmi-451 (the incomparable Doona Bae), who, right before her sex scene, says in an adorable Oriental accent, "It is forbidden," making me flash back to Richard Chamberlain and "Shogun", not to mention those '90s phone-sex commercials promising that Asian women possess secrets of foh-biddun pleasure. It's made immeasurably worse, of course, that the man she's about to fuck is a Korean underground soldier played by Jim Sturgess in Teahouse of the August Moon makeup. And then there's the future-shock thread that plays like the lovechild of Cast Away and Neil Marshall's Doomsday as Tom Hanks, doing his best backwoods idiot Nell, leads an Eloi (Halle Berry, still black) up the side of a haunted mountain to Contact a lost tribe in a Blade Runner off-world.

Cloud Atlas is that occasional flick doomed to be damned with faint praise (it's so...committed! and, and...earnest!) and defended by charges of critics not understanding it. In one timeline, editor Jim Broadbent reassures his bellicose client (Tom Hanks, doing Bob Hoskins for some reason) that critics only read "quickly and arrogantly" before said client launches a critic off a balcony to his bloody, audience-approved demise. It's ironic for Cloud Atlas to go after critics, because they comprise the largest demographic of people who might possibly catch all the pop-cultural signposts left there for the audience like a trail of DayGlo breadcrumbs. At the end of the day, the biggest tragedy of the picture isn't that it's a giant, vapid mess of small ideas masquerading as big ones--no, the biggest tragedy is that German co-director Tykwer, whose extraordinary The Princess and the Warrior and Perfume remain unavailable on Blu-ray in the United States, continues to struggle to find material worthy of him.

It's tempting to applaud the film's audacity, but beyond volume and galleries of bad makeup, accents, and noses, all it really is is a pat portmanteau trading in tired master-plots and their mildly-uplifting resolutions. "What is an ocean but a collection of drops?" asks a character who sees the light while everyone else is kicked out of the piece entirely as they try to figure out whether that's Hugh Grant under the fright makeup this time or just Weaving again as The Mysterious Wu Fang (or Warwick Davis's leprechaun). Warning enough? Susan Sarandon's in it. No? How 'bout the dialogue where it appears they're actually defending Carlos Castenada? Why not Richard Bach? James Redfield? The biggest mystery of Cloud Atlas is that there are enough nice moments (most of them in the stories of the composer and the clone) to make this a not-total disaster. There's evidence here that the Wachowskis are gifted, but they haven't made anything truly great since Bound. There, I said it. Follow Walter Chaw on Twitter

This movie was beautiful, exciting, and it moved me greatly. I'll take an incredibly mounted, flawed amalgam of both pretentious and sentimental philosophy with beautifully-paced action (such as this or "Watchmen"), over excrescently boring, pretentious dogshit about absolutely nothing (like "The Fountain", "The New World", and "The InnKeepers", all of which Walter seems to love because they... why? Actually, I'm sorry. Seriously. Why the fuck?) any day of the week.

And the reason the same actors played different characters is - ya know - kinda built into the premise of cyclical human history and reincarnation? Not always successfully done, but not real difficult to understand why it was attempted. Yes, the philosophy is simple, though not all of it naive - just as simply because something is convoluted and complicated on the surface doesn't automatically make it inherently worthy of study.

I agree with Kevin that there was no Magic Negro. He was a good sailor, and a perceptively good (not to mention hot) friend who changed someone's mind about slavery. That's it. How is that offensive? And when contained within it is commentary that seems intrinsic to the overall themes of the whole movie, how is that storyline not worth pursuing?

There was, of course, no need for black face. But in all honestly, I wouldn't have been opposed to it, though I am white so admittedly disqualified from even proffering that as an option. The only reason they didn't do it while continuing to do yellowface was not because they couldn't have done it without being culturally insensitive, but because Al Sharpton and Spike Lee would have had a field day, and there are (fortunately) no Asian equivalents to those ass-clowns.

That the Wachowskis self-financed this gives me a little fucking hope that someone, somewhere is committed to making large-budget movies that challenge us with big ideas wrapped in equally challenging, but always exciting, narratives - not just commercial monstrosities that challenge us to keep our IQs, or to stay awake.

The fact that Walter has the nerve to make comparisons to reference to Solzhenitsyn's imprisonment in the middle of this as a form of irony, but not the nail-clawing actual prison sequence in the middle of horrendously interminable - and boring as all shit - "The Dark Knight Rises", is selective fucking memory if I've ever seen it.

Oh, and "The Field Where I Died" might have made even *me* cry, but that was rightfully considered one of the worst, most boring episodes of "The X Files" produced during the Duchovny years. I'll give him this - for the kind of work he heaps praise on, at least Walter's consistent.

Just didn't realize he was so sensitive about critics being attacked. There, there, Jon Lovitz. Perhaps we should all grow a thicker skin.