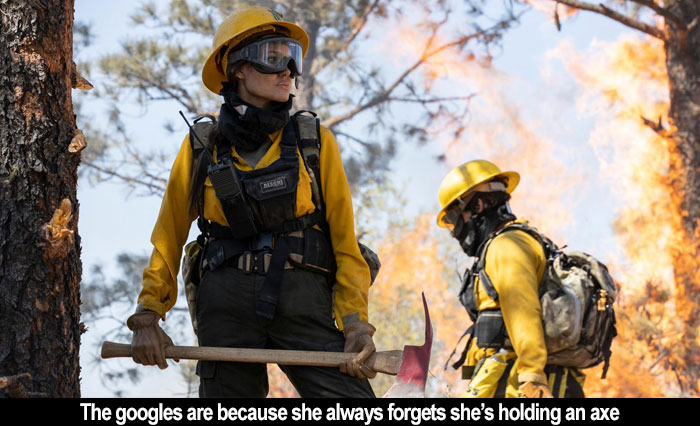 by Walter Chaw A certain déjà vu occurs with movies that feature what Gregory Peck once referred to as an endlessly replicable script. The hero who has endured trauma and, through the auspices of the film's familiar master plot, is given an opportunity to heal. In the parlance of this formula, perhaps there will be surrogate parents and children, replays--whether in the service of a literal time-loop or a figurative one--of inciting events with the opportunity to redress them, or... Look, I'm trying to find a clever way to say that Taylor Sheridan's Those Who Wish Me Dead is a new movie you've seen at least a hundred times before. It is one in every ten films or so. At its best, it's a cozy throwback to deadening programmers like The Client that saw great casts and decent budgets at the mercy of airport-rack bestsellers adapted by rote and delivered on time. At its worst, it's a meta-game of Scream where the instantly-exhausted viewer can nail major plot points based solely on the casting and the style of swooping once-helicopter/now-drone establishing shot. Maybe that's why there are so many superfluous cuts in this film--like how the introduction of one character to her summer home is split into six separate shots, none of them telling anything more than how she has arrived and managed to unlock the door.

Of minor interest is how the hero with a troubled past looking for redemption is not only a woman this time around, but Angelina Jolie. As a fire-jumper, Jolie's Hannah is an accepted member of a macho band of bon vivants relegated to fire-watch duty because she's failed a psychological evaluation after a mistake in judgment resulted in the death of three young boys. We know this because Those Who Wish Me Dead is granular about spelling everything out in word and flashback and then word again to be sure we understand what we've seen and not somehow misinterpreted or thought it was some kind of dream. Which it is--a dream, that is, the first time we witness it; a flashback the other times. It's not confusing, it's sloppy and narratively desperate. Late in the game, a fire-spotter plane sees a structure that has not burned up in a forest fire, and the pilot is careful to tell his co-pilot--who would already know, given that they are both firemen--that the fire has "gone right over it." When characters who both know something take the time to tell each other what they both know, it makes for some tough viewing. I noted that this exchange happens in a way that it could've been added in post-production, meaning someone might have watched a preview of the film and said they didn't understand why the building hadn't burned. It's not a great idea to pitch a lesson plan at the slowest child in class.

I will say it's interesting that Jolie is back in front of the camera as something like an action hero again, and it's a terrible shame that she's squandered. For a while in the Aughts, Jolie became a viable action star thanks to Gone in 60 Seconds and her franchise-starter Lara Croft: Tomb Raider (and its sequel, The Cradle of Life), and her eclectic resume is sprinkled with superlative stuff like Mr. and Mrs. Smith and more ambitious-than-ultimately-successful forays into the genre such as Wanted and Salt. As a heroic lead, Jolie was well-served by her obvious intelligence, her chaotic energy and physical presence, and, of course, her Faye Dunaway-esque, stunning/alien beauty. Just as Arnold Schwarzenegger could never be mistaken for an average Joe, Jolie can only ever be the most interesting thing in a picture and the flashpoint for whatever conflagration is to come. The puzzle Those Who Wish Me Dead fails at is how to solve a problem like Angelina Jolie. Attempts to make her drab in men's pants and flannels, with an unkempt mane and, worst of all, a recent tragedy that makes her cinematically sad accentuates the contradiction of spending this much time making her ordinary and then giving her all this heavy material, which mainly draws attention to how she's too good for this garbage. In tamping her down, the filmmakers highlight Jolie's strangeness here. She's the star, but she's treated like an afterthought. Of all the major players, she does the least.

The plot, typical of Sheridan at this point, concerns how the proverbial little guy trying to do the right thing is forever at the mercy of rich men and the corrupt, monolithic systems they control. Little Connor (Finn Little) is caught in the crossfire when some rich people hire assassins to murder his dad (Jake Weber), a forensic accountant who has "done the right thing" and is about to pay the price for it. The assassins are father/son team Jack and Patrick (Aidan Gillen and Nicholas Hoult, respectively), meticulous and professional until they aren't and in the employ of mysterious business magnate Tyler Perry, playing a version of himself. What they don't count on is that while Connor and his pop are trying to get to Montana cop Ethan (Jon Bernthal), Connor will slip into the protection of firefighter Hannah. This sets the stage for Hannah to demonstrate her courage, resourcefulness, and knowledge of the land as she Bruce Willises her tween buddy across the unforgiving but postcard-pretty Montana landscape--her profession coming in especially handy after the baddies decide to start the world's stupidest distraction by setting a giant forest fire in precisely the area in which they're searching for their loose end. Alas, Hannah isn't so much resourceful as she is a good listener; an obvious mom despite the film's attempts to make her a broken husk, she's a babysitter, essentially, until a final battle, during which she mostly functions as a punching bag.

If this isn't Jolie's return to action stardom, Those Who Wish Me Dead is also a poor dramatic vehicle for the Academy Award winner, whom I think time will show to be much, much better than how she's generally been utilized. (She's an even more talented director.) This film doesn't ask much of her and it's frustrating. The key action sequence is given to Medina Senghore as Ethan's wife, Allison. Allison is tough, smart, hugely pregnant, and threatened at one point with branding by two white men--a loaded image not given much time to simmer before she proves herself the kind of action hero we wish Hannah were. It's not that Senghore doesn't hold her own, nor that the scene is unwelcome--more that it does Senghore no favours to cast her alongside Arnold Schwarzenegger, more or less, playing a kindly replacement parent to a freshly-orphaned moppet. Even when she's not onscreen, Jolie upstages everyone else in the movie with the mere promise that she's coming back and just you wait when she does. I'm still waiting. I watched Those Who Wish Me Dead twice, something I seldom do under the best of circumstances and certainly not when I don't like the picture to begin with. I did this because the first time through, I watched it on my phone (the screener app is phone-only), and that was, let's say, not ideal. I worried I'd been distracted and wanted very much to give this movie another chance, so I cast Those Who Wish Me Dead to my television, turned on the sound system, and lowered the lights. It was actually worse the second time around, but I figured it out: Jolie should've played Allison, because she's already a star--and Senghore, were she Hannah, would be well on her way now to becoming one.