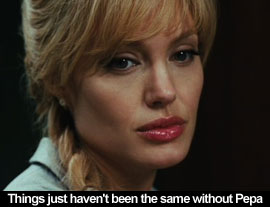 by Ian Pugh SPOILER WARNING IN EFFECT. The question that drives the marketing campaign for Phillip Noyce's Salt--namely, "Who is Salt?"--is ultimately the very least of the picture's mysteries, so there's no point in trying to keep a lid on it. Evelyn Salt (Angelina Jolie) is an assassin born and bred in the former Soviet Union, planted in the CIA as a sleeper agent until she's activated and sent to kill the current President of Russia. Nothing too earth-shattering, right? That juicy tidbit pales in comparison to the movie's other poorly-kept secret: Salt is, figuratively and more or less literally, the misbegotten offspring of From Russia With Love. Her father, as seen in flashback, bears a strong resemblance to Robert Shaw's Red Grant; her boss (Daniel Olbrychski) carries a knife concealed in the sole of his shoe; and, get this, ex-Soviet radicals hoping to instigate a war with the West are masterminding the whole plot! Patched together from vintage materials, the entire movie is an attempt to merge the popular fears of the 20th century with the hyperactive action-flick sensibilities of the 21st. Caught in an uncomfortable wedge between Bourne and Bond, Salt ends up as a slightly-higher-octane version of Knight and Day. An awful lot of stuff appears to be happening in the film, what with Salt repeatedly, breathlessly chased through various metropolitan areas by her CIA cronies Peabody (Chiwetel Ejiofor) and Winter (Liev Schreiber)...but good luck trying to care.

Salt can only be described as painfully obsolete. There's a reason they don't just remake From Russia With Love with Daniel Craig--the material no longer reflects global anxieties. Because Salt plays up its outdated Soviet intrigue with such mad dedication, however, there are times when it flirts with self-parody. Peabody investigates suspicious nesting dolls in Salt's apartment, while she disguises herself with ushankas and meets up with a fellow agent bearing a sinister scar across his cheek. Part of me wishes that Noyce would have gone farther still with these cultural signifiers*, but really, it's because of them that Salt falters on a thematic level. Beneath the sheen of this wannabe blockbuster lies a desire to address the long-term effects of the Cold War on the modern political and cinematic landscapes. (Consider Salt's tenure as a prisoner in North Korea, within which lies the implication that she had her programming tortured out of her by her fellow commies.) But since the movie has its mind set on being a spy-thriller throwback, it attempts to encapsulate everything we, as filmgoers, know about Soviet communism (the symbols, the history, the conflicts, the hypocrisies), resulting in awkward shifts in tone. Is this an Iron Curtain farce or a paranoid Reaganaut fantasy? There's simply too much baggage for this dumb little flick to process. The only player operating with any consistency here is Schreiber, who remains one of Hollywood's great underutilized treasures. Understanding his character completely, he regards Jolie with a half-romantic/half-paternal eye, in the process proving himself far more capable of balancing contradictory impulses than screenwriter Kurt Wimmer. You'll see the movie's final twist coming at least a mile away, but Schreiber's commanding turn gives it a bit more weight than it earns on its own.

Meanwhile, look to the headlining actress to understand why Salt fails on a level of pure excitement. It's difficult to believe that Salt is a woman with two separate identities when the only persona on display is that of Jolie herself; much like her spiritual counterpart Tom Cruise, Jolie doesn't act anymore so much as she stands around, acutely aware of the camera, looking like someone who belongs in the movies. If the script is too front-loaded with ideas to do a single one of them justice, then Jolie prevents you from becoming lost in the moment--she's crossed that threshold where she's too iconic a presence to ever seem in any real danger, or for any of her onscreen relationships to ring true. Salt performs plenty of ostensibly dangerous stunts, jumping across cars and trucks in a bid to outrun the CIA, but you'll never shake the thought that, hell, those are just special effects. Is she concerned for her beloved husband (August Diehl)? She pretends to be, certainly, but the feeling isn't palpable. There isn't even the slightest doubt that things will work out for her in the end, leaving room for a sequel--or maybe a television spin-off. Then again, given that it's trying to win the Cold War twenty years after the fact, Salt's dependence on foregone conclusions shouldn't come as much of a surprise to anyone. Originally published: July 23, 2010.

*Would it be too snarky to say that I'm disappointed the movie's ads don't utilize the hammer and sickle? return

I love the idea of Angelina as female corollary to Cruise, for whom Salt was originally written. I remember a writer for Esquire once writing that Cruise is handsome in the same way a FerrAri is. A sort of iconic,functional Uber-beauty and I feel the same way about Jolie.