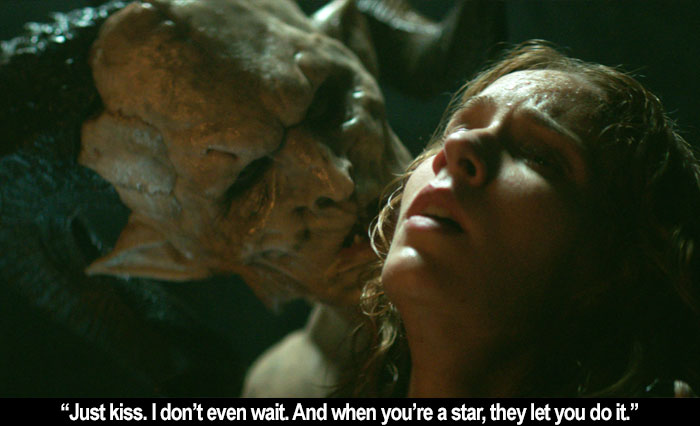 by Walter Chaw The first film of British director Neil Marshall's I haven't liked, The Reckoning is his contribution to the niche but endlessly rich Witchfinder General horror subgenre. What I've liked about Marshall to this point--from the Hawksian platoon-meets-soccer hooligan bonhomie of his werewolf debut Dog Soldiers through to his reboot of the Hellboy franchise (a widely-derided piece that I found delightfully perverse, gory, and hewing closer to the Mignola source, for better or worse)--is the efficiency and lack of sentimentality driving his narratives. His best-known picture, The Descent, is a triphammer thing, not an ounce of fat anywhere on its body--an instant classic about interpersonal tensions and resentments expressed through collapsing, wet, vaginal tunnels and the monsters that live there. It's a product of a distinct directorial voice that I could trace through all of his pictures. In contrast, The Reckoning could have been directed by anyone and, more to the point, feels a lot like it was directed by its star, Charlotte Kirk, who had a hand in its production and writing. It's a romantic hagiography of Kirk, establishing her as a romance-novel heroine in various carefully-arrayed, soft-focus, medieval tableaux. The Reckoning is not simply bad, it's uncharacteristically bloated and flaccid. Embarrassing, too.

Grace Haverstock (Kirk) is a young peasant mother and doting wife to rakish Joseph (Joe Anderson) in the plague-ravaged 1665 English countryside. In an overwrought crosscut montage, we learn that Joseph hangs himself after contracting the Black Death--the better to not infect Grace and their infant child, I guess, leading to the moment where Grace takes up a broadsword she can barely lift to cut him down. There are inconsistencies here in serfs owning such a weapon, and in a later flash where we see the rope severed where it was not severed, but they're the kinds of things you only really notice when the movie is not, in itself, diverting. It's not sleight-of-hand when it's just hand, is what I'm saying. Evil landlord Pendleton (Steven Waddington) suggests that Grace could provide an "alternate" means of rent payment, which the noble, windswept, eternally-only-slightly-mussed Grace refuses. Declaring her a witch, Pendleton sees her led away in shackles. This leads to a few days of torture at the hands of Witchfinder General Moorcroft (Sean Pertwee) and his horribly-disfigured henchwoman, Ursula (Suzanne Magowan). The old Marshall would have used this setup for all manner of uncompromising atrocity: the brutal murder of the infant, the painstaking depiction of the zero-sum game of torture, the cogent critique of the fragility of notions of social order. This Marshall spends his energy erecting Grace as the repository of all that is good and resilient in the world. Pretty, too. Even after having her insides scooped out by a giant metal dingus, Grace is strutting like a runway model in literally no time.

Presenting frankly the atrocities visited upon women in the 17th century for refusing to be raped and using that as a launching point for a broader excoriation of how things haven't really changed that much in this regard is a good thing. Presenting the atrocities as something that could be endured and even shrugged off if you were only brave and virtuous enough (and also if you loved your baby enough), is maybe part of the representational problem. There are dream sequences where Grace fucks the Devil, sort of, but this leads to not her fall from, ahem, grace, but rather a strengthening somehow of her resolve. If the suggestion is that her superhuman recovery from the tortures visited upon her is a result of infernal intervention, it's undermined by The Reckoning's determination not to have a reckoning with the toll of real trauma. But neither does the film suggest any sort of divinity for Grace despite its aspirations to Dreyer in its plucky torture backtalk. No, Grace is strong because she's a tough, 21st-century woman who drops witty takedowns like, "What's the matter, not your type?" That's the most puzzling thing about this film in the context of Marshall's filmography, given that his other pictures do a pretty good job with consequences while avoiding common pitfalls of making heroes uncomplicated. It's tempting to speculate about what went wrong, but more useful perhaps to offer that it's never a great idea to have the writer of the script, and a listed producer, be the star as well of what appears to be an On the Waterfront apologia for offended virtue. Anyway, The Reckoning is a feel-good movie about comic-book feminine empowerment. It's like The Girl with the Dragon Tattoo, only more boring. What a pity.