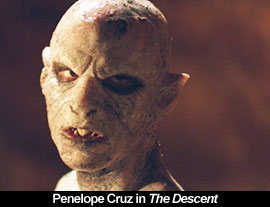 by Walter Chaw Beginning in the same way as countless other genre pictures (the city folks go to a cabin and have boring, perfunctory, character-defining chatter), Neil Marshall's often-terrifying, often-brilliant The Descent subsequently manages to describe for long stretches a complicated, Jungian labyrinth of regret and shadow-projections and doubling through dank explorations of a vaginal, womb-like metaphor for the subconscious. There's a moment where our avatar, Sarah (Shauna Macdonald), emerges from a gore bath and stands reborn into the very avenging feminist totem of Carrie post-prom: it's just one of three "births" Sarah endures (four if you count a dream sequence in a hospital early on), the last of which stands in tribute to the final sting of Carrie. It's possible, in fact, to split the film into quarters according to its recurrent motifs of gestation-into-discharge following penetration.

Described in the United States (and anticipated for almost a year; the film is already long on DVD in the UK with its original ending intact) as the distaff version of last year's underestimated The Cave, The Descent is a tougher, more thematically rich horror film loaded with panic-attacks that sound like Lamaze breathing, lines like "down the pipe," and a way of photographing water seeping off subterranean walls that casts everything in intensely biological terms. Mention it once and leave it be: there's something rich to the way that Marshall has his bitch goddesses marshal fire and do violence to eyes--and for all the exposition, there's a wealth of understatement in the use of both a child's birthday cake and a dominant motif in recent "feminine avenger" cinema (Kill Bill, Sympathy for Lady Vengeance), that of the loss of a child and its rippling, toweringly symbolic toll on the rest of civilization. Our civilization.

Sarah is widowed and left grieving for her daughter in the opening minutes of the film. When we rejoin her in twelve months' time in remote Appalachia (the travel brochure for which should read "What's an Appalachian outing without a gruesome compound fracture?"), we find Sarah in the company of five spelunking women--including former best-mate Juno (Natalie Jackson Mendoza), whose namesake (a jealous, omniscient, omnipotent goddess) is our first clue--invested in Sarah "having a good time" following her stay in bereavement hell. The trek into the wilderness to highlight their isolation, the discovery of the animal carcass to bring home the idea that these people of modernity are about to be reintroduced to their mortal animalism...every time-honoured and weather-beaten convention is paid proper obeisance by genre-loving Marshall, who has, in fact, name-checked Deliverance, Alien, and The Shining as prime inspirations/sources for this film, which is honest of him and mostly accurate. I'd replace The Shining with Nicholas Roeg's Don't Look Now, however, in that there's a suggestion throughout that the ghost of Sarah's child is trying to warn her. Once in the cave systems, The Descent becomes genuinely claustrophobic and harrowing, with the setting providing the bulk of discomfort long before the monsters of the Id hop up out of the bubbling deep.

The Descent's gore is a marvel of weight and consequence. A gash on a hand is made to look like a bleeding vagina while a broken bone is handled with all the care of a tetherball on an aggressive playground. When these characters scale rock, it's accompanied by groans and cries of exertion--none of the weightless acrobatics of Sylvester Stallone or Tom Cruise (or even the Piper Perabo character from The Cave). There's a physical toll to their actions, and that sense of material karma seeps into the film's foreboding of spiritual karma. Every action in the set-up has a reaction in the cave; Marshall handles the sacrifice/redemption cycle of his characters with true grit and a genuine lack of apology.

Eat or be eaten, the quick and the dead, even the cultural relativity of Levi-Strauss's The Raw and the Cooked are embedded in The Descent's complex order--there are whole semesters to be mined from not only the film's gender philosophies but also the filmmaker's reconstitution of male archetypes around female icons. (Consider that the savagery Sarah exhibits near the end of the film--especially towards her ostensible partners--would be something unthinkable for a male hero wanting to retain his "heroism.") Not hurting things, certainly, is that while the picture's humming for almost the whole of its last half, it's one of the scariest, most purposefully lawless horror movies in an age that celebrates slick exploitation garbage like Hostel for breaking new ground. Indeed, The Descent breaks old, no, ancient ground and does so with conviction and serious chops (note how in one scene after Juno pulls herself out of a lake, the camera begins, subtly, to stalk her). Segueing from his satirical/hysterical werewolf flick Dog Soldiers, Marshall's on something of a roll. Originally published: August 9, 2006.