The Personal History of David Copperfield (2020) 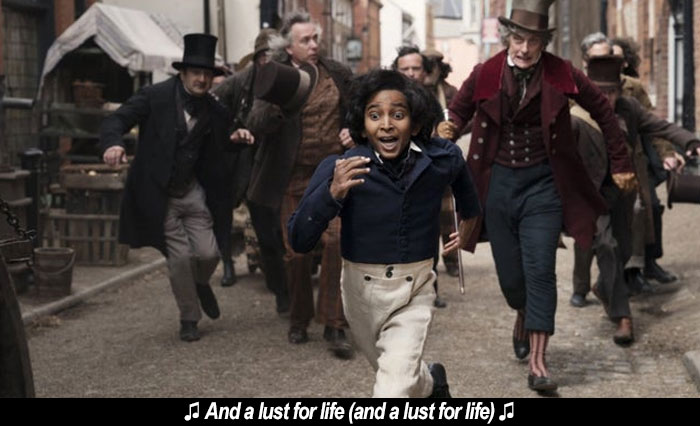 by Walter Chaw I hate Charles Dickens. I hate what I know about him as a human being. I hate how he writes. I hate his books. To be sure I hated them, I read them all. Because I majored in English and then British Romanticism, I even had cause to study his work--sometimes in great, exhausting detail. I have read volumes of critical studies, been subjected to numerous stage, television, and film adaptations, and had the great displeasure of watching a "colour blind" local production of A Christmas Carol a few years ago that filled me with irritation and upset. I have listened patiently to professors, friends, girlfriends who swore by Dickens; their eyes get twinkly when they talk about him, like they were talking about the Beatles or some shit to someone who maybe just hasn't heard the George Harrison tracks, yet, before forming an opinion. I read David Copperfield on a fancy-bound garage-sale find my parents brought home alongside volumes by Dostoyevsky, Cervantes, and Melville. They were to be my friends through elementary school when I had precious few of the human kind. You could say it was movies and these books that taught me English, and you wouldn't be far off. I still love those other authors. I still hate Dickens.

His cleverness feels smarmy and self-indulgent to me. It's too obvious, too often, that he was paid by the word, and the rises and falls in action in his books reflect the serialized format in which his stories typically found publication. What many describe as pluck, I see as a forced superiority to the material--a simulacrum of sprightliness I find to be grotesquely artificial rather than satirical: twee and ingratiating, not pointed and wise. It's the high-school kid in the pirate shirt unironically delivering Shakespeare highlights during a night of absinthe and clove cigarettes. I don't see the satire at all, in truth, that vaunted Victorian excoriation of industrialization and dehumanization. With The Murder of Edwin Drood, I felt for the first time something like anger at having stuck with something after suspecting a couple of paragraphs in that it wasn't going to get any better. You're going to want to direct me to the "good" one that will change my mind, and I want to reassure you that I've read it--and that someone whose opinion I cared about more than yours has already recommended it to me as a curative. It did not work then, either, and, in fact, only deepened my dislike of the author, along with causing me to look on the person recommending with suspicion. Dickens, for me, is the Grateful Dead of canonical authors. Whatever, dude. The only time I liked "Friend of the Devil" was when Lyle Lovett--who is a musician--covered it.

Armando Iannucci's The Personal History of David Copperfield seems to feel the same way about Dickens and so adapts David Copperfield as an antic mess careening out of control from melodramatic scenario to unlikely resolution, repeat, then repeat, then repeat. If you were a chicken pushing a button for a little bit of feed, you'd peck that goddamn button all day long, too. Iannucci crystallizes Dickens's lack of a plan by turning an interminable novel into The Adventures of Baron Munchausen, and it works in the sense that it's obnoxious as fuck, relentless, cocksure, meta self-aggrandizement. But it has its moments. Moments the book does not have, like the one where the idiotic first wife, Dora (Morfydd Clark, fantastic), announces she has no place in the scene she's in and asks David (Dev Patel) to write her out. It reminds me of that Grant Morrison "Animal Man" comic where Wile E. Coyote realizes he's being tormented by a sadistic God--or of Duck Amuck. More of this, please, and less of the Terry Gilliam bullshit with multi-media sets morphing from scene-to-scene, or the play-within-a-play tango for this story of a book-within-a-book.

The Personal History of David Copperfield is at its best when it pointedly cuts out most of the book's dead-end diversions to focus in on how the only valuable interpretation of the story is as one of how storytellers are created through trauma and pain. David's strife-sharpened defense mechanism for surviving his terrible life is assimilating effortlessly into everyone else's perception of him. He's given a series of names. His aunt, Betsy Trotwood (Tilda Swinton), hoping for a girl in the first place for her dead brother's widow (also played by Morfydd Clark, because Oedipus), calls him "Trotwood" because if she has to pay for his room and board, at least David should have a name she likes. It's just one of the nicknames and malapropisms reflecting David's Roger Thornhill-like agreeability to go with the flow. Going with the flow at the expense of one's identity is, as it happens, the first play in the immigrant playbook. A note that Iannucci has gone with "colour blind" casting here--the actors spanning a broad spectrum of races as a rejoinder, perhaps, to the "best person available" argument given whenever white people defend casting white people in minority roles. Seeing Black faces in a Murdstone's (Darren Boyd) factory is thorny as fuck, but making David Copperfield "Hamilton" demeans the race conversation as much as it defuses it. As "Hamilton" does. Defenders of both ("Hamilton" and this film) will say the casting serves the greater Cloud Atlas purpose of reframing the race debate as a philosophical thing rather than a sociological one. Except that not everything agrees to mean what you want it to mean as easily as David Copperfield agrees to be what you want him to be.

Taking The Personal History of David Copperfield, however, as a film about an immigrant, struggling mightily with his adopted language before falling in love with it and then finding freedom, love, and acceptance through writing... I guess I would say I connected with it in an immensely personal way. For the first time, Iannucci gave me an "in" to Dickens, particularly given that the way he does it is by taking the absolute piss out of him. The performances are to a one lovely. Swinton walks away with the film, of course, but holy shit is Rosalind Eleazer good. Ben Whishaw, too, though he's been consistently superlative for years now. I can't say I cared too much for Iannucci's frenetic, restless camera nor the film's bugs-under-my-skin pacing (like a scene where David and his uncle, Mr. Dick (Hugh Laurie), go kite-flying by blazing through a room of startled people before breaking through a glass door), but I also can't say the style doesn't reflect the movie's strategy of riffing on the material's highlights on the way to telling its own story about how language can set us free. In the end, that love of words is "Veep" creator Iannucci's auteur hallmark. He loves them so much and so well, he even found something valuable in Dickens.