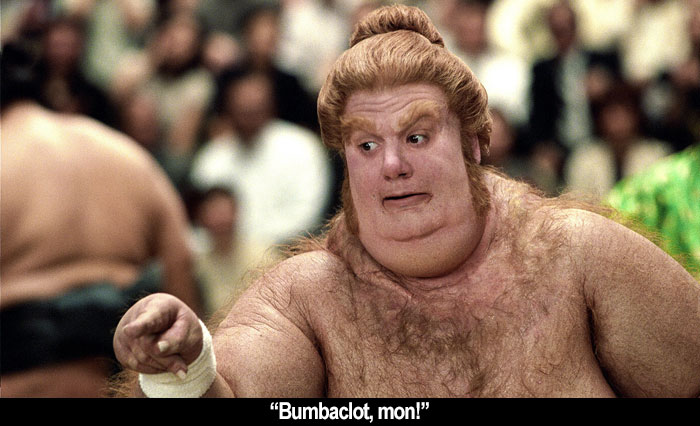 by Walter Chaw Ricky Tollman's Run This Town is a neo-Sorkin, fast-talking, "ripped from the headlines" potboiler that is really just one of those plucky underdog-makes-good melodramas wherein a cub reporter breaks the Story of the Century™. Said story this time around is that Toronto mayor Rob Ford is a grotesque fucking idiot. (Ford has since had the good fortune to be posthumously outdone and overshadowed in his cheap-mobster, bully-bro incompetence by the worst human being on the planet, Donald "POTUS" Trump.) Playing Ford in this hip little photoplay is the great Damian Lewis; it bears mention that the fat-suit makeup makes him look a lot like David Lynch's Baron Harkonnen (or Mike Myers's Fat Bastard) as he stumbles around calling a staff member "Jew" and sexually harassing his aide, Ashley (Nina Dobrev). The bright-eyed stringer looking to break into the big-time is schlubby Bram (Ben Platt), who, when first pitching the story to his tough editor (Jennifer Ehle), is scolded for not having much of an opinion about anything. Are you rooting for him yet? It's hard not to.

The burden Run This Town carries to do something if not different from at least in the same neighbourhood as the notable films that came before it proves too great. In place of recognizable human beings, find a collection of types: the freshman hungry for a scoop; the editors skeptical of the world; the cartoon supervillain needing a comeuppance; the traumatized young woman hoping someone believes her, etc. No amount of snazzy split-screens, rapid zoom-ins, and swaying handheld shots will make this film more than a ventriloquist's dummy reciting known events. A secondary problem, difficult to overcome, is that even if these are not events well-known by a mainstream American audience, crimes of political assfuckery haven't been anything like surprising for about forty-five years now. Do you think it's scandalous that the mayor for a major city would be caught on tape doing crack at a crackhouse? How about a President of the United States courting foreign interference in an election, being credibly accused by dozens of women of sexual assault, having an advisor who advised on how a foreign government could cover up their dismemberment of an American journalist... Fuck, how much time do you have? The only surprise this film could have offered would be if Rob Ford somehow weren't an absolute degenerate that a huge percentage of fellow human beings wanted to burn the world down for them.

Frankly, swapping the gender of the actual reporter who broke the story should by itself, in 2020, exorcise any goodwill gathered for this endeavour. Fair to wonder what Run This Town is about, as it's not going to teach anyone anything and no one who ostensibly should be watching it is ever going to watch it. What's the story behind its creation? Was it pitched as a searing, topical exposé more urgent than ever? The problem I have with that is the same problem I have with the much-better-because-at-least-it-was-respectful The Report, in that if this is why the movie was made, it feels more opportunistic than it does genuinely motivated by some kind of public service. Run This Town is a very basic Rudy story wrapped up in genuinely horrific bullshit heralding the end of democracy before a tidal wave of criminal syndicates gaining power through the cynical stoking of white nationalism. I find it distasteful to use the fall of the West as the method of conveyance for a crowd-pleaser designed to make you feel good and, more than good, smart for getting broad references to Ron Jeremy, Marie Antoinette, and Deep Throat and an extended metaphor employing the Apollo program and moon landings. I mean, not only does Run This Town reference All the President's Men explicitly, but Tollman also films an underground-parking garage infodump in self-knowing (?) homage, in case you missed it. All of it's impossible to miss. Even so, by the end the characters are reduced to delivering long streams of moralizing exposition--which, in hindsight, while annoying, is still better than the self-congratulatory hipster patter wallpapering the rest of it. Bad, fine. Flip? Flip is a lot harder to forgive.