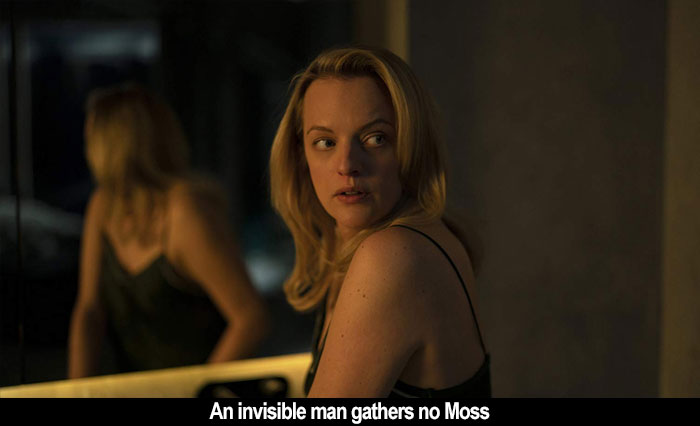 by Walter Chaw Leigh Whannell's The Invisible Man is a masterpiece--an adaptation not so much of H.G. Wells's book or the James Whale film of it, but of Gavin De Becker's indispensable The Gift of Fear, a guide for how women can learn to trust their intuition, overcome their denial, and identify signs of men on the verge of becoming violent. Men murder the women they want to possess every day and often bring harm to others in the process. As Margaret Atwood infamously summarized, a man's greatest fear is that a woman will laugh at him and a woman's greatest fear is that a man will kill her, and this has shaped our behaviours as a society. Men, as it happens, tend to support other men who are brought to answer for their actions, while women who speak out are castigated, cast out, and blamed for their own victimization. Virtually the only thing the "me too" movement has brought about is false confidence that it's safe for women to speak out without fear of losing their position or reputation. The world is a foul sty and the bad sleep well.

Cecilia (Elizabeth Moss) is in an abusive relationship with a powerful, controlling man. She describes herself being tormented by him physically, emotionally, and ultimately mentally as he mind-fucks her with promises that he'll always be with her, should she try to run, and always know what she's thinking before she thinks it. And if she ever leaves him, he'll kill her. One night, marshalling all of her courage and what's left of her resources, she runs. She finds shelter with her sister, Emily (Harriet Dyer), and a cop friend, James (Aldiss Hodge), along with James's teenage daughter, Sydney (Storm Reid). The first days are rough. Cecilia is afraid to get the mail, even with James coaching her from the porch. Whannell films her first steps out of James's house like an astronaut testing the surface of an undiscovered and maybe hostile alien planet. Then news comes that Adrian has killed himself and left Cecilia a nasty, gaslighting letter, along with a great deal of money. I thought for a second that Cecilia was going to decline it because she would want to be free of Adrian entirely--but that's silly, isn't it? Whannell, who is smart, has Cecilia take it. Money is a progressively addictive drug, not unlike the anxiety medication, Diazepam, Cecilia uses to drug Adrian and, later, that Adrian uses to drug Cecilia. Adrian, see, has learned to make himself invisible somehow; and he's angry.

A small digression here to note the meticulousness with which Whannell details Cecilia's flight. She goes through the darkened, futuristic home she shares with Adrian, redirecting security cameras when not turning them off entirely. Whannell takes pains to show how she's being watched long before she's being watched. We all are, all the time. Later, Cecilia carefully paints white-out over the camera built into her laptop's screen, and as I'm writing this, I'm glancing at the little piece of duct tape I have covering mine. I don't have one on my phone, however, and if I were more interesting, I'm sure someone would have hacked it already to use it as a portal into my life. There are cameras everywhere. The issue of "revenge porn" is related to this extreme loss of privacy and the attendant ability to mass-disseminate information now, anonymously and instantly. Adrian takes pictures of Cecilia while she's sleeping. It's meaningful how Whannell makes the invisibility the product not of some magic potion, but of a suit constructed, it appears, from hundreds of tiny cameras. Not for nothing is the bad guy a master of "optics." The monster of The Invisible Man is a literal manifestation of not only the male gaze, of course, and how that gaze seeks to dominate women, but also of the surveillance state and how a few very wealthy and mostly white men control the Eye of Sauron.

Cecilia figures it out: "He's not dead. I just can't see him." She sounds like a crazy person, and as she tries to explain herself to allies, Moss plays her like a crazy person who's just sane enough to know when people don't believe a word she's saying. Cecilia marks their credulity--every slightly raised eyebrow, every sidelong glance--but she can't help herself because she's so afraid. She's used to people not believing her when she talks about Adrian besides. Moss gave the best performance of 2019 in Her Smell. She has competition, but she may be the best working actor in the United States right now. We know she isn't crazy, but when she speaks of her invisible, sociopathic ex, I had my doubts. Cecilia, whatever she is, has been deeply traumatized by her relationship with Adrian. She tries to get a job, but Adrian fucks with her, and she humiliates herself. Of course, me saying she's humiliated herself is because I'm programmed to assign blame to the victim in this way, and I'm doing my best to dig a hole in the sand but the sides keep crashing in. I feel like David in A.I. when that asshole kid makes him eat spinach and his face starts sliding off his skull whenever I wrestle with a lifetime of cultural programming.

The Invisible Man is about that programming and how bias is intractable because bias is by its nature invisible. Everyone likes sweet things, you see, but nobody ever asks why. The answer to why sweet is that sweet is rooted in evolutionary biology, though I guarantee you that most everyone takes it for granted that sweet is sweet and bitter is bitter. Similarly, there is implicit, invisible bias in every single one of our social interactions, and we don't know what they are even as they control us like behavioural puppeteers. The title of the film is at once literal and asked to bear the weight of a difficult philosophical concept; the "why" of most things is invisible to us. "Now, I can see you for what you really are," Cecilia tells Adrian's spineless lawyer brother, Tom (Michael Dorman, always great), clarifying the idea of seeing and how thoroughly it permeates the mission of this film: physically, metaphorically, even metaphysically.

Adrian isolates Cecilia from her friends and family. He makes her think she's insane. He makes her dependent on him financially. He wants her to carry his child because, in his mind, she belongs to him, but Cecilia, it goes without saying, belongs to no one. Some scenes remind of Bernard Rose's Candyman--the wrong-man intrigue (and Whannell makes a clever reference to Thornhill's U.N. trouble from North by Northwest) resulting in institutionalization. The traditional place for unwanted, misbehaving women, after all, is the asylum. Cecilia's journey likewise mirrors that of Sarah Connor's in Terminator 2: the woman no one believes running from a technological peril of which only she is aware. When Hitchcock employed the wrong-man trope (which he may not have invented but definitely refined), he did it with characters for whom a mistaken identity became their only identity. Cecilia's trauma defines her. It's made her "wrong" in another sense in the eyes of everyone who might help her. She's unreliable because she's so injured she must be nuts, right? It's easier to believe she's unstable than to accept that a brilliant man with limitless potential is a sociopath. It's also easier to believe that than to jeopardize the opportunities this man represents--for employment, for wealth, for status, for security.

Cecilia tries to cook for herself one day in James and Sydney's kitchen. She's easily distracted and skittish and probably will be for a long time--maybe forever, it's hard to say. She sets something on fire and doesn't know how to put it out, but Sydney shows her. At a turning point in the film, Cecilia demonstrates that she's learning self-sufficiency. This is how Whannell demonstrates a certain mastery in The Invisible Man. Through the characters' actions and reactions, we see them adjust, learn, and grow. Whannell's Upgrade is an absolute delight for his ability to tell complete stories through physical movements. His is a cinema of emotional expressionism. Cecilia is paid a compliment at one point, and she responds, "I don't feel amazing. It's all a lie." I can't even begin to tell you how deeply this resonates with me. Though my trauma doesn't compare with Cecilia's, I guess it's not a contest. People who don't know me think I'm bursting with confidence. People who do know me know it's all a lie. When we think it's finally over, Whannell reminds you that it's never over for victims of trauma. Instead, they find a way to live with it. Elizabeth Taylor has a quote about railing against the world if you must, and then putting one foot in front of the other because you have no other choice. The Invisible Man is vital work. Read The Gift of Fear when it's over. And, in the words of another extraordinary reboot about love and insect politics, be afraid. Be very afraid.