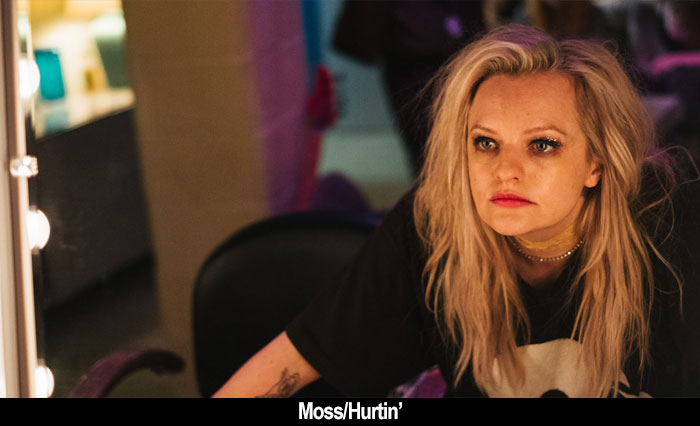 "When I needed it, no one ever put a hand on my back and told me it was gonna be alright."

This is Becky Something (Elisabeth Moss) on stage at a performance by her band, Something She, and she's two hours late, as it happens--as is her habit and her custom. All she does is inflict pain, her mother (Virginia Madsen) tells her; Becky, a black vortex of drama, tells her mom to lay off the drama. It's a practice of narcissists to project their toxic behaviour on the people around them, but Becky, who acts very badly indeed, isn't the only bad actor. Her mom has a manila envelope full of something Becky's long-absent father wants Becky to see and the mother bringing it to her daughter at this moment, knowing her daughter is explosively unstable, is a form of narcissism, too. It's the person in your life who wants you to process your experience in the same way they process theirs--emotional bullies engaged in the tyranny of the weak. Becky's bandmates are at once enablers of her behaviour and disdainful of it. Her ex, former DJ and now long-suffering single-dad Danny (Dan Stevens), brings his and Becky's toddler around for a visit with his new young girlfriend (Hannah Gross) in tow, because that's just a selfish, terrible idea, too. The first third of Alex Ross Perry's Her Smell is a collision of flawed people self-medicating, self-deluding, doing their best on the fly in the middle of a hurricane of fame and other people's expectations and making the worst possible decisions. It's claustrophobic to the point of panic attack, and Perry, with DP Sean Price Williams, composer Keegan DeWitt, and editor Robert Greene, beautifully orchestrates the walls crashing in. It's relentless and suffocating. And if you're wired a particular way, it's also uncomfortably familiar.

Perry divides Her Smell into five separate pieces, using "home movie" video as buffer between them to convey a skeletal backstory. The first three segments are concerned with Becky's fall, while the last two allow her a nominal resurgence. It's not redemption for a broken person, more like an uneasy ceasefire over contested territory. The best anyone could hope for, really. Perry and Williams shoot the sequences detailing Becky's disintegration in long, anxious takes, often handheld, that offer none of the respite traditional editing can provide. As there are no breaks in Becky's mania, there are no breaks in the coverage. We're trapped with her: her mad consultations with a tin-shaman (Eka Darville) she's hired to cleanse auras and read signs, her pinballing between cooing at her little girl and screaming at Danny. It's exhausting. Once she gets clean and a "baker's dozen" of lawsuits have stripped her of fame and wealth, the film sits with her through long, patient, static shots. The shift in tone is jarring, but the miracle of Moss's performance is that we see this stillness in the hysteria of her rock bottom, and we see her fury in the stillness here after the storm has passed. Off the drugs and the high of performance, she plays a stripped-down version of Bryan Adams's '80s anthem "Heaven" to her kid and then, at the urging of one of her former bandmates, Marielle (Agyness Deyn), she performs a new song she's been tinkering with in exile. Becky makes Marielle promise not to tell anyone about it first, though, and when she sings it, she turns her back to Marielle.

Performance is a trust-fall with your audience. There's no one Becky hasn't betrayed, so how can she hope to not be hurt by them in return? Before the final segment's "reunion" concert, Becky seeks out a former protégé, Zelda (Amber Heard), whom Becky's insulted and rejected out of the pain of some imagined betrayal. (Maybe Zelda's just gotten more popular. It doesn't take much.) She locates Zelda in a subterranean hallway backstage of their venue and, nervous to the point of frantic, asks if Zelda will sit with her before the show in a kind of meditation or prayer. It's telling that Becky calls it a "séance," an invocation of the dead. Zelda is glad to let bygones be bygones because "time passes." She says it with a smile. She says it like she means it. It's a wonderful scene in a film packed with an embarrassment of wonderful scenes, a gesture of real grace from a character who's handling success.

There's a Harlan Ellison story called "Try a Dull Knife" that is about a lot of things, yet mostly it's about what happens when someone's charisma is sapped from him without any opportunity to replenish. Introverts would read this as a way to make their social issues a metaphor for vampire and blood puppy. After Becky plays her reunion show--and it's like a heart attack trying to guess if she'll follow through or go on another scary breakdown--her sainted manager Howard (Eric Stoltz) asks if she has an encore in her. "No, that's all I got. It's over," she says. It's the most emotionally intelligent and fair-dealing moment, the most insightful and devastating, I've seen in any movie this year. Her Smell is Alex Ross Perry's Punch-Drunk Love: a picture about a broken person in a world that's threatening to them who miraculously ends up with people and in situations that give them strength rather than leech it from them. The two films share similar, terrifying scores, kindred rhythms and camera strategies. But where the one is a romance, Her Smell is a horror movie about trust and love that shows how people who are drowning can find some debris to float on for a while, maybe longer. It's amazing.