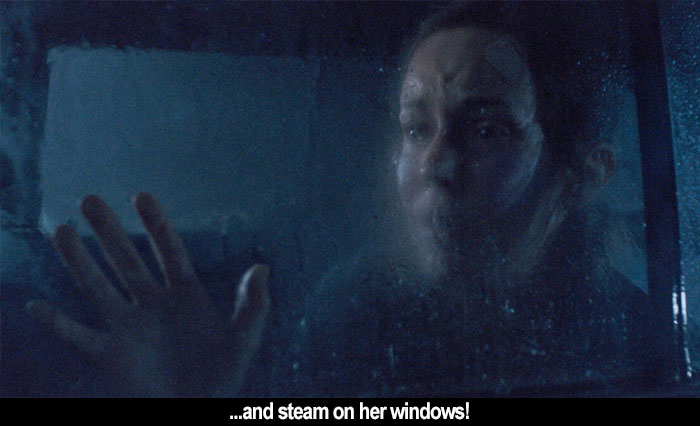 by Walter Chaw As assured and compulsive a feature debut as the Coen Brothers' Blood Simple, Matthew Pope's Blood On Her Name does a fair job of simulating what it's like to be inside a panic attack. A rural noir that has its roots in the bonds of family and the economic terror that threatens at every moment to destroy those bonds, the film's hero is small-business owner Leigh (Bethany Anne Lind), abandoned by a no-account husband and left with a failing automotive business and a son who has to meet periodically with a parole officer. The kid, Ryan (Jared Ivers), is a high-school student who blinded a classmate in one eye for teasing him about his missing dad. But he's a "good kid," Leigh says. She believes it so much that she says it a few times to different people throughout the film. Ryan's parole officer (Tony Vaughan) says he's been in the business a long time and good kids don't end up sitting in a booth at some small-town diner across from him. We may think he's a dick for saying so, but he's been doing this for a long time and probably knows something we don't.

What we know that he doesn't is that Leigh has killed someone. Blood On Her Name opens with a corpse in a growing puddle of blood and Leigh making the decision to hide it. A terrible decision, of course, given that the dead guy broke into her business at night and she killed him in the process of defending herself. I mean, look at her face--he beat the hell out of her. Yet she panics in the heat of the moment, wraps up the corpse in plastic, and rows it out to the middle of the lake. And then she does nothing like you think she's going to, because she knows a lot that we don't know. One of the pleasures of Blood On Her Name is how we try to leap ahead of this modest and familiar bit of hokum only to discover it's neither modest nor particularly familiar. In that way, it reminds instantly of stuff like Jeremy Saulnier's Blue Ruin, which likewise starts as something you think you understand before quickly becoming slippery and clever. Blood On Her Name is smarter than it seems at first glance--indeed, smarter than you gave it credit for. It may even be smarter than you.

Leigh's dad is a cop, Richard, played by the marvellous Will Patton in another of his ambiguous, twitchy performances of barely-restrained aggression. He desperately wants to have a relationship with Leigh and his grandson, but Leigh has a longtime grudge against him. One night, while Leigh is tripping on the illegal downers she's scored to calm her fraying nerves, she has a waking dream of a terrible secret her dad made her keep when she was little--younger than Ryan, even. When things continue to spiral out of control (Leigh lost a necklace and can't seem to find it (a child in her subconscious draws a fingerprint as some prophetic accusation)), Leigh finally looks to Richard for support--and gets it, not in the way she hoped, but in the way she should have expected. Blood On Her Name is on one level about the sins of the father; Leigh and Ryan are both concerned about whether or not a specific kind of violence and criminality might be carried in the blood. Why does Leigh do what she does? Why does she then do what she does to rectify it? Whenever you're tempted to scoff at the simplicity of what she should do to fix things, the film explains to you why that course of action is off the table. Blood On Her Name is way ahead of you.

Blood On Her Name is a challenge to jaded audiences from two guys, Pope and co-writer Don M. Thompson, who've done their homework in the genre. The performances are to a one superlative, grounded by Lind, who has about her something of Mary-Louise Parker's pointed intelligence and coiled-spring potential energy. She handles Leigh's revelations so ably that she never seems an observer of the chaos she's creating, though because she's the only one who knows everything from the start, nothing really surprises her. Still, her guilt is palpable, as is her fear. There's a moment where, seeing things coming to a conclusion, she tells her son where he can find his birth certificate and other personal papers--should, you know, the need someday arise. Because Pope and Thompson are very good at this already, Ryan responds how a teenager would. Something flickers behind his eyes, but he just says, "Okay." Blood On Her Name is alive and invested in its characters so much that it allows them to go where they would for reasons that make sense to them. (I wonder if its closest analogue is in fact a Safdie Brothers joint rather than a Coen Brothers noir.) It's wonderful. I can't wait for their next one.