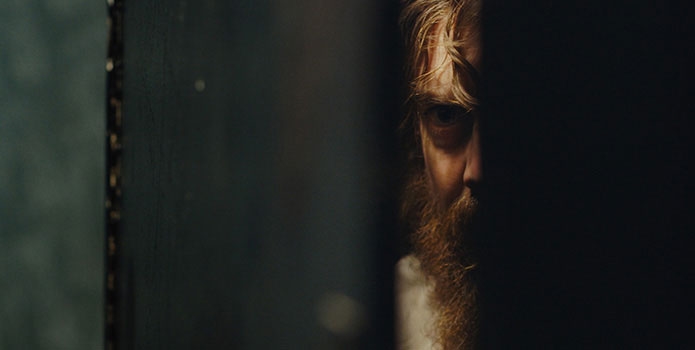 by Walter Chaw Six years after his surprisingly poignant, unexpectedly deft, and, of course, funny debut Murder Party, multi-hyphenate Jeremy Saulnier (he writes, directs, and photographs his movies) returns with something very much like a genre masterpiece with Blue Ruin, the best Coen Bros. noir since they were making them. Grim in exactly the way that can be delightful, it's paced beautifully, written beautifully, and performed, that's right, beautifully. Saulnier's intelligent script is a model of restraint and a strong sense of humour. Macon Blair's reluctant avenging angel Dwight is someone I've never met before in a movie, and when Dwight seeks out old pal Ben (Devin Ratray) for help at some point, well, I'd never met him before, either. It's fair to say that nothing that happens in Blue Ruin happens the way I thought it would happen, if it happens at all. Note an early moment in the picture where Dwight sets up an ambush and doesn't pay it off, or that standard thing in movies now where the hero goes to a drugstore to pick up the supplies they need to perform self-surgery, which here ends with...that would be telling. All the requirements are there for a grand satire, it's true, yet Blue Ruin isn't that. Instead, it's a film that understands exactly what it is and what space it occupies, and at the end it's not merely an extraordinary character piece (Blair's turn would be star-making in a just universe), it's also a nimble thriller full of outrageous fortune and stunning reversals meted out perfectly between its breathless moments and the moments where it breathes.

We meet Dwight camping out beneath some eastern boardwalk in a rusted-out blue husk of a car that you could speculate is the source of the title. Better, for me, is to think that "blue ruin" describes a mood and an apocalypse in a movie that's on one level about the dissolution of family, no matter the raging against the dying of the light, and on another about keys that open doors to other doors. It's Kafka's "Before the Law", and Dwight is the "man from the country" eternally kept outside the gate until the exact moment of crisis, when it all becomes clear. The last line of Blue Ruin is "the keys are in the car," while the final image is of an item that would have maybe prevented everything from happening in the first place. It's Saulnier's way of offering the same kind of terrible, existential irony of Kafka's parable. Again like the Coens at their best, Blue Ruin understands that the root of all films noir is existentialism and Kafka and that terrible, vertiginous feeling that the world is a meaningless place full of coincidence and misadventure, but that we're wired in a special way to mine gestalt from that and that this, for whatever reason, is somehow good enough.

Blue Ruin is about the ability of people to cope with entropy--to find meaning in it. Dwight, homeless, collecting plastic on the beach to pay for the occasional hot meal, learns one day that the man who killed his parents was released from prison and decides that he'll do something about it. It's clearly the first thing to provide him real impetus in nearly a decade. He reveals resourcefulness, but he's a very ordinary guy with no particular training who is only ever maybe a quarter step ahead of his task, rather than the supernatural amount gifted the usual hero of films like this. His reunion with sister Sam (Amy Hargreaves) at a diner thrilled me not for its fireworks, but for the total lack of them. Dwight and Sam speak quietly--they almost don't speak at all. Dwight says in what's maybe his third line of dialogue an hour into the movie that he's not used to talking "this much," and then at the moment we've been coached to expect an emotional breakthrough, a neighbouring table reinjects the unexpected. It's Tarantino territory--the sedate version, but no less exhilarating.

All of that without even mentioning that Blue Ruin is taut as a garrotte. It's hard to imagine how Saulnier's managed to make a movie like this just his second time out; it demands, really, a careful second look at Murder Party. From scene to scene, the picture's both alive and economical, allowing time for every seed to flower. I'm out of superlatives. At the end of the day, I wanted to watch Blue Ruin again as soon as it was over. I wanted to talk about it, to show it to my friends, and, a rarity, I really wanted to write about it. Though its melancholy certainly lingers, Blue Ruin also left me feeling excited, buzzing like the blue bug-zapper that Saulnier uses to light three or four entire beats. Slated for release in 2014, it will be one of the best films of next year.