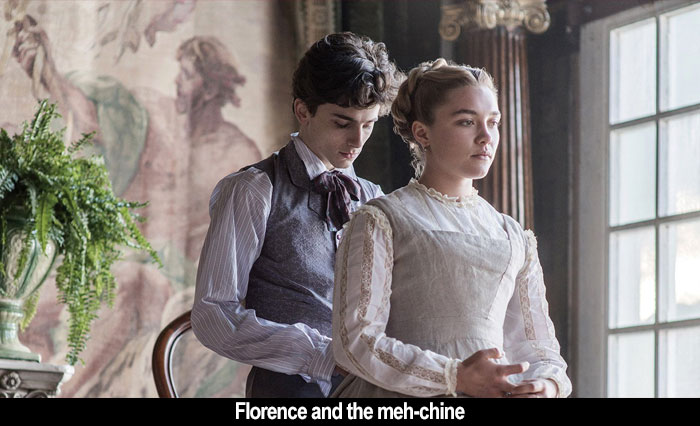 by Walter Chaw Halfway through Greta Gerwig's rejiggering of Louisa May Alcott's beloved and stultifying classic of marrying well, the four March women gather in their attic to play dress-up in a homegrown drama club. Their purpose that day is to inaugurate honorary March sister Laurie (Timothée Chalamet) into their ranks, and the energetic, excited babble of children playing at theatre and democracy rises to the rafters as a joyful noise. The appeal of this Little Women, I think, is that it tries very hard to maintain this level of energy throughout; and the ultimate failure of this Little Women is that its reasons for doing so are inspired less by genuine exuberance than by calculated, maybe even arch, affectation. This little play-within-a-play is like Hamlet's play-within-a-play: it's the key. Gerwig's adaptation is careful in constructing an image of itself of progressiveness and metatext without risking enough to actually be critical of its text and, by extension, itself. It has its cake and eats it, too, because they deserve cake, goddamnit, and who are you to tell them they shouldn't have any? I mean, honestly.

The centre of the story is Jo (Saoirse Ronan), a young woman who imagines herself a writer and who arranges the pages of her novel on the floor, the better to move them around like index cards on a storyboard. When the narrative isn't working, I've always found, why not put the end at the beginning and the middle parts all akimbo like you dropped the manuscript coming down the stairs and now it's post-modern? What Jo does is not so much an illustration of how novels are written than it is a map of how Memento was edited and, probably, how Gerwig wrote the screenplay to this film. That makes Jo not just the audience's entry into the film, but Gerwig's avatar as well--which also means that when Jo acts horrifically towards future paramour and University staff peer Friedrich (Louis Garrel), betraying her absolute inability to take criticism about her work, this is Gerwig's self-deprecation. The problem being, of course, that this humility does not extend to Jo and Jo's appalling behaviour only inflames Friedrich's ardour for her, because of course acting like a virulent narcissist is always attractive to a well-adjusted and desirable mate. Friedrich is perfect for Jo because Jo deserves to be loved for who she is, even if she is kind of a monster. I mean, honestly. Working in Friedrich's favour is his quickness to devalue a young woman's contributions to one of the few avenues open to her in the late nineteenth century--and even then usually under a male pseudonym. Hot, right?

That sort of modern misinterpretation of a historical text is irritating, to say the least, and I do it here because I am irritating. But also because this Little Women is itself engaged in that exercise, though only to the extent, it seems, that it will not overly offend men. That's the curious thing about parts of our new discourse: the degree to which folks appear to want powerful men to write more women into their stories rather than desire powerful men to sponsor women to write their own stories. It's also curious to me that women might be offended for men not to want to watch their stories in the same breath that they warn men to keep their opinions of these stories to themselves once watched. I'm reminded of a conversation I once had with Charlie Kaufman about the great artist Kiki Smith, and how her work was an astonishment to me in part because I didn't understand it and was therefore, in no small measure, afraid of it. I felt that way this year with Claire Denis's High Life. I feel that way, to be honest, with all of her movies. They are the product of a non-shared experience, and they're alive and fucking ferocious. They demand respect and don't give one solitary fuck what you think of them. Isn't the end goal that we acknowledge and accept difference instead of continuing to placate the ruling patriarchal critical/philosophical mindset? Maybe I misunderstand the goal.

Anyway, Gerwig's Jo-projection is an irrepressible bon vivant--a naïf wise beyond her years who observes that her dresses are all scorched because she's too creative to notice when she's literally, not just figuratively, on fire. Céline Sciamma uses this identical device for the same purpose in her Portrait of a Lady on Fire, which is simultaneously a play on Henry James's novel about a headstrong young woman coming to terms with her debt to the ruling culture and a reference to a literal painting its lovelorn protagonist makes of the object of her love that must not speak its name. That one's set a hundred years earlier, yet things don't seem to have changed much in Little Women. Oh, rota fortunae. My favourite scene in the film not involving Chris Cooper takes place outside a formal dance one night when Jo first meets Laurie and they dance all crazy and free like Frances Ha or Frances's primogenitor, Elaine Benes. It's silly and energetic in a way Alcott's book is never silly or, especially, energetic, and it captures something of the thrill of youth that seems to be the main, maybe only, currency Gerwig ever has to spend, though at least she has a lot of it. I loved it because it's one of the few times I was able to stop trying to untangle the three timelines (or is it four? Is it only two?) into which Gerwig has split the narrative.

Compounding the issue with the flashback sequence is the casting of the otherwise great Florence Pugh as, for about a third of the film (half? A quarter?), a child of twelve or so. It's grotesque when she stomps about in the way that Martin Short's Clifford is grotesque, but only one of these characters is disturbing on purpose. Better still is the casting of Emma Watson, who seems like both a very nice person and constitutionally incapable of being unself-conscious performing a role--and she performs that motherfucker to the rafters. This is very good for playing precocious young wizards with something to prove or affected high-society house burglars, not so good in a film that is already suffering from children's-pageant syndrome. The other issue I have with the structuring of the picture as a series of flashbacks and flash-forwards is that while on the one hand, I understand how it presents some tension that is not natively there by revealing at the beginning that one of the sisters dies, on the other hand it allows for a sort of thematic double-dealing that is this film's apparent thesis. I think Little Women is an "adaptation." in the Charlie Kaufman sense rather than an adaptation. It's about how Gerwig bolsters her brand as the spokesperson for a certain generational affirmation.

Consider the picture's conclusion. Jo capitulates to marriage with her second-choice guy without Gerwig capitulating to anything, using the shield of Jo writing a book to confuse whether or not Jo gets married in "real" life or only in the book about it. Or in the movie adapting the book written about the true-life events of what the film now presents as a series of Proustian recollections that are entirely coloured by the viewpoint of a protagonist who is, as we have seen, utterly charmed by herself. The tearful epilogue, then, is either a fantasy she has written for an audience she now agrees is too simple to accept an independent woman in no need of an advantageous marriage, or a "reality" where Jo has, like a Henry James heroine, allowed herself to be shackled to traditional notions of domesticity. Why so coy? Are we now judged to be the audience too simple to accept a strong woman? Or a sacrifice? There's an element of calculated appeasement here that I wish was not. Little Women is critical of the text, but it comes to the same conclusions about its audience. To be charitable, let's just say it's Gerwig's commentary on herself.

So Little Women is a movie about traditional values that makes itself okay to like. It features a remarkable turn from Chris Cooper, who, between this and A Beautiful Day in the Neighborhood, has made me cry more than any other human this year. It has that dancing sequence that is full of life, and then it has a lot of pristine costumes and immaculate sets that make no sense within the framework of the film's impoverished heroines but are certainly pleasurable to the eye. I liked it more when I didn't have to write about it. Then, in the exploration of its mechanisms, I found its machinations to be distasteful, if not in the final analysis dishonourable. Maybe it's not for me, and I don't understand how it will affect its intended audience. That's fine. I wish the film were as comfortable with that as I am. I mean, honestly.