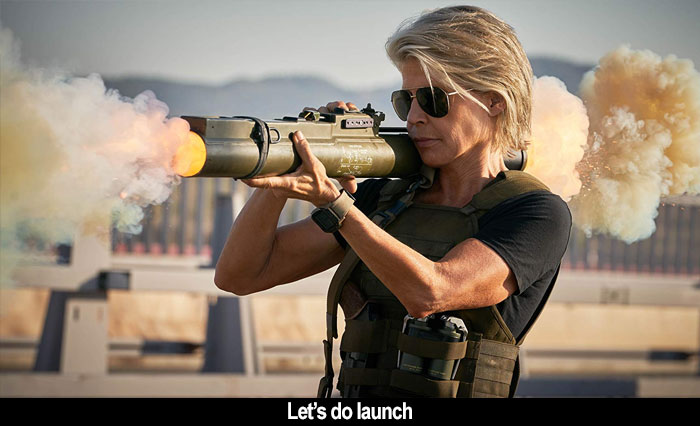 by Walter Chaw There's a moment in Terminator: Dark Fate--the sixth entry in the long-running franchise but a do-over in terms of narrative continuity--where a woman, mortally wounded, gives consent for things to be done with her body after she's gone. It's a small moment, and one that works to move the film's exposition, but it speaks volumes to how carefully the script, by David S. Goyer, Justin Rhodes, and Billy Ray, has endeavoured to be at least partly a conversation about how women are reduced to their physical function and appearance. "He's not here for you, he's here for your womb," says a grizzled Sarah Connor (Linda Hamilton) to frightened, on-the-run Dani (Natalia Reyes)--but "he," a killer robot from the future called a "Rev-9" (Gabriel Luna), isn't. He's there for something else. The picture opens with Sarah's videotaped therapy session from Terminator 2, in which she recounts her dream of nuclear Armageddon--a reminder of how her carefree party-girl character from the original had transformed through the trauma of losing a lover and escaping a monster from the future, only to be branded crazy by an unctuous male therapist and imprisoned in a facility where we witness her further humiliation and assault. Dark Fate shows what happens to Sarah and her son, the saviour of the future and a target of two assassination attempts, while in hiding in Guatemala, then hops forward into our present to the arrival in a ball of blue lightning of Grace (Mackenzie Davis), who, upon proving her battle-worthiness (and artificial augmentation) against a trio of adversaries, clothes herself in a man's attire even though a woman's is available. Function, the decision suggests, over appearance.

The best bit in the third Terminator film has a female Terminator inflating her breasts to distract a man; Dark Fate shows a woman dispatching three heavily-armed men while she's naked and does nothing to objectify her appearance. She's like a model in the SPORTS ILLUSTRATED "body" issue. Her body is, literally, post-futuristic augmentation, a product of function over appearance. Even the term "augmentation," which generally refers to exaggerated sexuality, is in this context used to describe how Grace has been turned into a cyborg badass. She's been sent back in time to protect Dani from the Rev-9. Fans will recognize this as exactly the plot of the first two films. The crucial difference this time around is that the target isn't a woman's reproductive potential or product, but the spirit and leadership ability, untapped, of the woman herself. The question of family and stewardship is raised immediately in an early action sequence set in the rapidly-mechanizing car factory where Dani works. There will be two fathers in this film, both revealed to be unnatural, both examples of how men can choose between being either a father or a sperm donor/sonuvabitch. Yet unlike the first two instalments in this series (Dark Fate pretends that entries 3-5 don't exist), the father issue is secondary to how each of this film's three women approaches her agency.

In a way, Dark Fate can be read with profit as three steps in the evolution of feminine power: an archetypal construct of Furies or, yes, Fates that provides a framework for understanding how women characters work in narratives. "The Golden Girls" is this with its Virgin/naïf, its Whore, its Mother, and its Crone (who embodies elements of the other three). In Dark Fate, the naïf is Dani, the "Whore" or empowered element is Grace, and the Mother remains Sarah, still operating after all this time in the role of ferocious protector/avenging angel. Traditionally, the goal of each personification is to ascend to the next personification. Not everyone survives the change. It's a beautiful touch that, during the final confrontation in the film, the key to the defeat of Rev-9 is something that appears to be implanted in the vicinity of Grace's womb. Beautiful, too, is Grace objecting to a body scan as an attempt for her adversaries to view her "private parts." The bulk of the picture consists of conversations and arguments between Dani, Grace, and Sarah as they try to escape the Rev-9 until they can figure out how to destroy it or until it destroys them. Early on, the three are in a car for an exposition dump that's impressive because it clarifies their three roles in relation to one another. Power dynamics are established alongside the interpersonal politics of these women. At one point, Grace pulls up her shirt to reveal how one of her superiors has tattooed coordinates to her side so she won't forget them, then makes the tired aside "as if I can't remember shit." She's a super-powered soldier, courageous and resourceful, and her male boss assumes she's a dingbat who can't read a map.

Dark Fate is also about the American surveillance state and its imaginary border crisis, ginned up by a pathetic piece of flatulent white supremacy as an excuse to build concentration camps and control his flock with fear of imaginary coyotes. Our heroes discover that they need to smuggle Dani, an undocumented 'illegal,' into Laredo, where someone will later explain their massive collection of firearms as protection against the inevitable disintegration of civilization. ("And also, this is Texas.") They spend time in one of our proud nation's prisons for refugees and children, where an official objects to the term "prisoners" and "cages" before being beaten to a cheer that used to be reserved for Indiana Jones punching Nazis. The Rev-9, at the end of this sequence, gains the instant trust of a pair of good ol' boy Texas policemen by affecting a chicken-fried southern accent and saying that, in fear of unarmed, starving, and terrified immigrants, he'd "prayed more in five minutes than I have my entire life." Of the few things Americans lead the world in, adults who believe in angels is one of them. Curious, given Americans' proclivity for ignoring every single thing taught in the book they so love that mentions angels a lot. As in Children of Men, the movie that predicted this indelible stain on all our souls, the saviour of all of us happens to be one of the "fugees." As in the Bible, too, come to think of it.

All of this to say that Dark Fate is a deep and complex satire of contemporary gender roles, the danger of massive lurches in military and surveillance technology, and the broken state of our national politics. It will reward an aggressive read and repeat viewings, but it's also an able and well-constructed action vehicle, as well as a science-fiction featuring a handful of thorny questions about time travel it gratifyingly declines to answer. (Asked what she's doing at a particular juncture, Grace says, "Future stuff.") Director Tim Miller (Deadpool) frames the set-piece fight sequences with logic and clarity. Married to the film's investment in its characters, even jumbo jets ramming each other in the sky and machines not hurt by bullets or punching getting shot and punched feel like they have stakes. The third act is driven by the reintroduction of Arnold Schwarzenegger in one of his iconic roles--maybe the iconic Schwarzenegger role. In his dotage, Arnie's proven himself an inimitable, irreplaceable presence. He's confident and assured here--hilarious, too, as he makes fun of his own deadpan, Conan the Barbarian persona. There are a lot of corollaries between Dark Fate and Sylvester Stallone's Rambo: Last Blood: aging action stars dealing with their legacies in stories about how we've lost our ideals and hope, and how our heroes may not be around for much longer to help us get them back. More, it suggests that the old guard has failed and it's up to the new: the girls, the minorities, the hated and the underestimated, to take the lead. Dark Fate is fantastic.