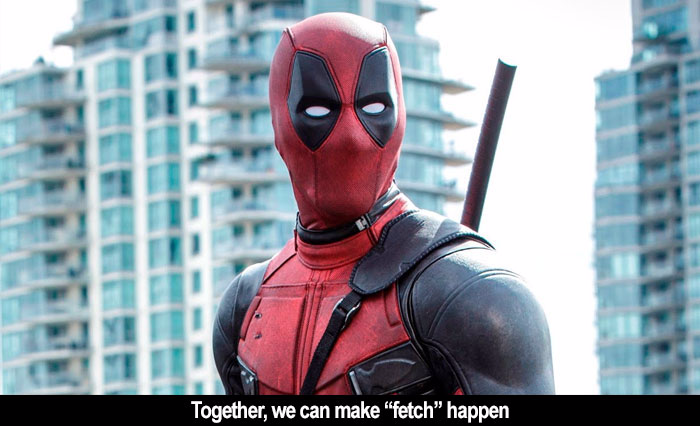 by Walter Chaw I get it. Deadpool is post-modern. It's absolutely aware of itself. It's The Cabin in the Woods. The primogenitor of Deadpool is Dennis Miller's '90s standup: sneering, smarmy, arch, and peppered with pop-culture references running the gamut from Ferris Bueller to Limp Bizkit to the fact that there are two Professor X's in Fox's X-Men franchise. Carted off to stand before the beloved X-Man, Deadpool (Ryan Reynolds) asks, "McAvoy or Stewart?" And an audience of savvy comic-book/film fans cheers because they've been recognized. It's the button rock stars push when they say, "Hello (wherever they are)!" at the beginning of a set. It announces that they are aware of the space they occupy, and legions of concertgoers make the devil horns and light their lighters in appreciation: "Yeah, man, you're here. In that you are correct." Deadpool is about recognizing itself for what it is and recognizing its audience for recognizing where they are (which is there, recognizing that their hero recognizes where he is). When Deadpool's alter ego, being wheeled into the place where he's going to be turned into Deadpool, begs them not to give him an animated green suit, well, you knew that Reynolds was disastrously the hero in Green Lantern, right? It's only the second time it's referenced. He also calls a little bald girl Sinead O'Connor twice, because it's hard to write jokes. He could have called her "Blue Sunshine," except the only thing Deadpool can't afford to be is smarter than its audience. Relax--it never is.

Deadpool is the product of an evil government experiment to create super-somethings for some nefarious purpose. Early on, when Deadpool talks about 'cupping' Wolverine to secure his own movie in the Marvel-verse, he neglects to mention that he's also copped Wolvie's origin story. Deadpool is very much about being anti-formula and anti-heroic. It does that by giving Deadpool a vengeance-driven storyline, complete with a girlfriend (Morena Baccarin) who spends the Final Showdown™ in garters, micro-mini, and clear glass tube. Hitchcock would approve. Sticking her in the tube, Deadpool could've said, "Back in your gilded cage, Melanie Daniels." See? I've seen other movies, too. I can also make relentless references to other things that are sometimes funny, mostly not, and have no point but to show off how much I know about stuff. Deadpool can get away with structurally resembling every other comic-book movie in this cycle because it knows it's just like all those other movies. Don't you get it? The problem is that observation isn't, for the most, part satire, and Deadpool at the end of the day is just Shrek with boobs and gore. In Shrek, when an ogre re-enacts that upside-down kissing scene from Sam Raimi's Spider-Man, that's the entire gag. In Deadpool, Deadpool observes that there are only ever two X-Men at Professor Xavier's school, Colossus (voiced by Stefan Kapicic) and Negasonic Teenage Warhead (Brianna Hildebrand), and speculates that it's almost as if Fox doesn't have enough money for more X-Men cameos. This is the old David Letterman joke about NBC. It seemed more pointed the first time I heard it, thirty years ago or thereabouts.

A fun game would be to compare Deadpool bon mots and Dennis Miller bon mots. I liked the bit where Deadpool's stoner buddy (T.J. Miller) references Blade II because I remembered that Reynolds was notoriously in Blade: Trinity and I recall reading that Wesley Snipes was perpetually stoned on that shoot and sent memos to the director signed "Blade." Patton Oswalt told those stories. I like Patton Oswalt. In the pantheon of great comics, Oswalt is several hundred steps above Miller. What were we talking about again? Oh, yeah. Deadpool has a couple of interesting moments: one involving a baby's hand, and another that has Deadpool taking a strap-on up the ass. The rest of it is Kick-Ass ultra-violence married to Reynolds's unctuous personality and a handful of fourth-wall breakers where Deadpool comments on how the girls in the audience are pissed that this superhero movie is disgusting, or where he speaks conspiratorially with his adoring fans about how he's a different kind of hero, even though everything he does is shoehorned into a story that is surreally familiar.

What we're left with is this strange artifact that does as much as it can to proclaim its difference while not being very different at all. Kick-Ass did this hostile Pirandello act much, much better. (Kick-Ass 2 would be the closer analogue to Deadpool.) This is a movie that declares the conventions of the genre are tired and worn out, then proceeds to follow them slavishly. It doesn't have anything to say. It is, in many ways, the film that Hail Caesar! warns against: too smug, too smart, and appealing mainly to an audience of jaded sycophants thirsty for blood, dick jokes, and the ability to nail broad call-outs to the most-consumed entertainment products in the history of mankind. It makes you feel smart. And it has a scene where the hero gets hilariously shot in the asshole. It's telling that the post-credits sequence is a direct entreaty to an audience raised on '80s cinema; Deadpool is the culmination of the complete takeover of popular culture by guys my age. When that's a good thing, it's sixth sequels like Creed and Star Wars: The Force Awakens. When that gets a little sad and desperate, it's Deadpool.