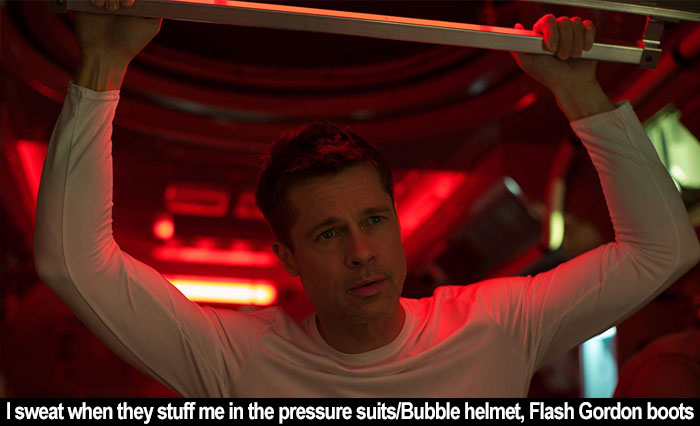 by Walter Chaw James Gray's Ad Astra is the sort of movie people who don't like Terrence Malick think Terrence Malick movies are like. It's overwritten to the point of self-parody in some places (consider a scene aboard a Mars-bound shuttle where our hero's patrilineage is mentioned, reacted to, discussed at length, and then brought up again), with a voiceover that doesn't invite introspection so much as comparisons to Harrison Ford's reluctant Blade Runner exposition. Imagine the version of this film with about a quarter of the lengthy chit-chat--or even one that doesn't mistrust its lead's performance so much that a scene where he's acting out his betrayal isn't underscored with narration: "Goddamnit, they're using me!" It's such a handsome film, with cinematography by Interstellar's Hoyte van Hoytema, that one is inclined to forgive this second consecutive attempt by Gray to make Apocalypse Now, except that it plays unforgivably like a "For Dummies" version of an ecstatic picture. Imagine the Carlos Reygadas version, or the Peter Strickland one (Ad Astra most resembles a super-chatty Berberian Sound Studio). Or just watch the Claire Denis version, High Life, which asks many of the same big questions as Ad Astra without asking them explicitly. Nor trying to answer them.

Roy (Brad Pitt) is a taciturn astronaut known for never letting his heartbeat rise above 80 bpm. This reminded me of the Ethan Hawke character in Gattaca whose "faked" heartbeat is so even that his doctor compares him to a metronome. Roy is the son of legendary astronaut Clifford (Tommy Lee Jones), who disappeared some twenty years previous on a mission to the edge of the solar system in search of intelligent life. He went looking for it because, I guess, intelligent alien life will help humans not be such assholes to one another and the planet. Ad Astra is set in the near future, an opening crawl tells us. We learn that the moon is not only colonized but balkanized between warring pirate warlords, leading to a chase sequence on the lunar surface that's interesting insomuch as it makes one nostalgic for Moonraker and a few minutes of Superman II. We also learn that a series of "cosmic rays" hitting the Earth are originating from the Neptune orbit where Clifford's ship, thought lost but not lost, sits in the dark. This is how Event Horizon starts, one thinks to oneself, but Ad Astra isn't a horror film (despite a kind of fun thing that happens on a Norwegian ship)--it's a movie about father issues, which...father? Let me tell you about my father.

When Ad Astra is at its best, it plays like a visually stunning adaptation of a stack of ANALOG magazines from the '60s. Its serial sci-fi bits--from the new Space Corps affiliation to the laser fights and haunted derelict spacecraft--are gorgeously retrograde. A bit about how an astronaut on a spacewalk can survive flying through a ring of deadly particulate matter is the kind of classic moment that would've been illustrated by a Wally Wood cover once upon a time. Even the treatment of Roy's wife (Liv Tyler) has about it a certain 1950s misogyny. Gray doesn't even keep her face in focus upon her dramatic--and MEANINGFUL--exit. You'd think visual cues like this would be enough for Gray, but they're not. A later scene where Roy is in a soundproofed room, speaking his heart at last in an act that finally cracks his impenetrable mien, is the summation of Pitt's career to this point and puts Ad Astra's themes in laser focus (in a scene where a "laser-encoded" message is being sent, naturally) that Pitt performs with devastating austerity and gravity. Except that Gray layers in that voiceover to make sure we don't miss it. Pitt is magnificent; there really aren't enough superlatives. He's aged into his face and the wrinkles showing up around his eyes convey exactly the right amount of regret and lived-in wisdom. He jettisons the charm that's gotten him here in favour of an oppressive interiority. When you get to these depths, the pressure is just enormous. A pity that Gray is constantly letting him down. When a filmmaker upstages his own film, he says he has no faith in his story, no faith in his star, and especially no faith in his audience.

Much of Ad Astra is like this. Donald Sutherland cameos as a plot device that makes no sense and gives a clue that makes no difference and then he's gone, with a vague impression of how he's always astonishing the only lingering afterimage. Helen (Ruth Negga), a young woman with an odd connection to Roy, gives him another super-secret clue at a serendipitous moment for no discernable reason, leading to no meaningful end. And then there's the big climax where the themes of the movie are expressed in the way the band Big Country has a song named "In a Big Country," followed by an epilogue where our hero, having confronted his daddy issues, finds himself able to connect again and be in the moment for other people. We know this has happened because he tells us so. We also know that Ad Astra is about how we're all alone out there but we're enough if we care about each other, since it tells us that, too--in words. I feel like Gray would've added subtitles and Garrett Morris scream-repeating it in a pop-up picture window if he could have. But the movie's worst crime isn't in thinking its audience is stupid--it's in thinking that knowing the root of your issues is the same as treating your illness. At that point, the film goes from being frustrating to being insulting. Ad Astra is one half imagistic masterpiece and one half that director's commentary where all they're doing is listing what's on the screen and repeating the dialogue. If only there were an option to turn off the special features.