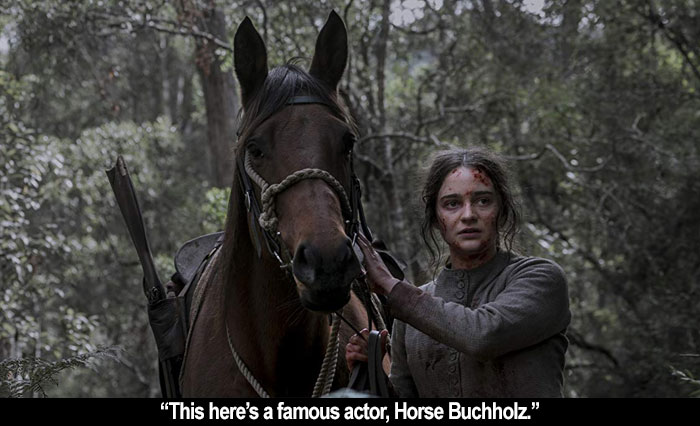 by Walter Chaw Philomela was the daughter of King Pandion I of Athens, sister to Procne, who was married to King Tereus of Thrace. After five years apart, Procne asked her husband to fetch Philomela for a visit. During the trip back, he raped her, and when Philomela wouldn't promise to keep quiet about it, Tereus cut out her tongue and left her for dead. She wove the story of the crime into a tapestry, however, and the two sisters, once reunited, boiled Procne and Tereus's son and fed him to Tereus. Upon discovering this, Tereus flew into a rage and the gods changed them each into birds: Procne into a swallow, Tereus into a hoopoe (the king with his crown of feathers), and Philomela into a nightingale, renowned for its song. In literature, the nightingale is associated with truth. John Keats's "Ode to a Nightingale" is one of his poems of "negative capacity." The traditional interpretation of it finds the poet falling into a state of death without death, exploring an idea that everything is transient and tends towards decay. It opens like this:

My heart aches, and a drowsy numbness pains
My sense, as though of hemlock I had drunk,
Or emptied some dull opiate to the drains
One minute past, and Lethe-wards had sunk:
'Tis not through envy of thy happy lot,
But being too happy in thine happiness,--
That thou, light-winged Dryad of the trees
In some melodious plot
Of beechen green, and shadows numberless,
Singest of summer in full-throated ease.

Here the Nightingale is introduced as the "light-winged Dryad of the trees," who lives on a plot composed of not only the greens of summer but also "shadows numberless." In the next stanza, the poet wishes to drink deep of the "warm South," although he's mentioned "Lethe" here, one of the five rivers of the underworld. Lethe's murmuring caused drowsiness and a drink from it, causing forgetfulness, was required of the dead. The murmuring for Keats in his poem comes later in the "haunt of flies on summer eves"; the spectre of death and decomposition is never far from life. When the Nightingale sings the poet has "ears in vain" for a thing that was "not born for death, immortal Bird!/No hungry generations tread thee down"--it's Keats declaring that his gloom is impenetrable as well as, perhaps, that he can't bear in his state to hear truth. And it's this combination of reads--the wronged woman, the truth-teller, the irrepressible spirit hovering in the liminal space between life and death, the teller in a state of unrelieved grief drunk on mourning--that fuels Jennifer Kent's sophomore feature, The Nightingale.

The Nightingale shares many of the same admirable qualities as Kent's previous film, The Babadook--and almost exactly the same shortcomings. It's an actor's showcase featuring another exceptional-unto-iconic female performance and another exploration of a woman's sometimes-fraught relationships and resilience in the face of overwhelming hardship, all framed by a storybook structure that, like Keats's poet, finds no succour in its repetition. In that way, Keats's ode calls out thematically to Edgar Allan Poe's poem about another bird, "The Raven": no matter how many times or ways its protagonist asks the bird if his lost love will return, the bird answers "nevermore." Poe has written that the asking, even knowing the answer, is one source of melancholy. The Nightingale would offer that no matter how many times its hero, Clare (Aisling Franciosi), seeks redress of her own troubles, the futility of the answer is always the same. This is a long way to say that Kent seems to want to get around the cycle of vengeance initiated by the first minutes of the film, yet can't seem to resist its pull. In not addressing entirely the wrong done to one, it sort of addresses the greater wrong done to Clare's companion, Billy (Baykali Ganambarr). Billy, whose aboriginal name means "Blackbird," has been hired by Clare to track a band of evil British soldiers in the colonial Australia of the picture's setting. In any case, Kent appears to be suggesting that the cycle of vengeance is, like a poet's melancholy, eternal.

Where The Nightingale suffers is that it ultimately can't resist being "on the nose" with a villain who, like the Babadook, lacks any real subtext. Where the Babadook was a literal manifestation of the Jungian shadow, the main baddie here is the unrelentingly brutal Hawkins (Sam Clafin)--stuck on shit detail clearing out "the blacks" for white settlers and taking out his frustration on the hapless Irish indentured prisoners in his care. Clare is one of them. He dresses her up and makes her sing for his men. In a scene I've been asked not to discuss in detail by the film's publicists, he gives Clare a reason to want him dead. The bulk of the film is about Clare following Hawkins and halfwit Leftenant Ruse (Damon Herriman) into the Australian wild. She hires Billy as her tracker, while the bad guys hire Billy's uncle, Charlie (Charlie Jampijinpa Brown). And nothing good happens to any of them. Kent and DP Radek Ladczuk capture the landscape in rich, undersaturated browns and greens. Billy's grief at losing his country to these "white fellas" is mirrored by Clare's losses--a delicate act of comparing tragedies that we forgive Kent for the balance of fury she applies to both. The best scene in the film is a quiet one where Billy is asked to sit at a table for dinner with an old white couple and cries with all the grief of his broken heart. "This is my country," he says. "This is my country."

The Nightingale is also too "on the nose" in the ease with which Clare loses her prejudices, in the way her decisions are undermined by Billy's actions (which subtly suggests that what happens now is maybe, just maybe, their own fault (but just faintly)), and especially in Clare's passionate monologue speaking to her ownership of her own story and body. Powerful words, if ones I had trouble reconciling with the setting and all that's come before. Even so, what works about The Nightingale works well. The portrayal of a seldom-told chapter of colonial ugliness is done with appropriate outrage and bluntness; the violence, when it comes, is unadorned and horrible (the stabbing death of one Brit is brilliantly extended and difficult to watch); and the sexual violence, in particular, is relentless albeit non-exploitative. If only the villains weren't so villainous and the heroes not quite so heroic. Philomela, after all, boils her nephew and feeds him to his father to redress her fury. (Her sister does even worse in serving her own son.) For the minute I thought Kent was going to allow Clare and Billy grace, The Nightingale was something truly special. As it is, it's a really good feel-bad movie that finally makes you feel kind of good.