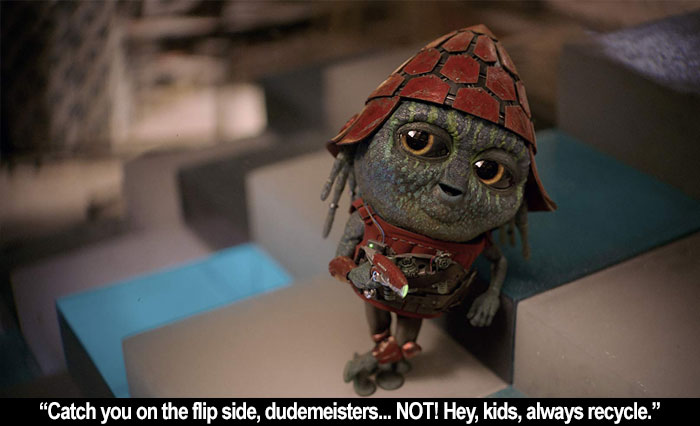 by Walter Chaw Banking on the idea that no one has seen Tomorrowland, F. Gary Gray's atrocious Men in Black: International (hereafter MiB4) begins three years in the past on a steampunked-out Eiffel Tower, where our titular alien hunters, Agents T (Liam Neeson) and H (Chris Hemsworth), battle an alien threat to the world called "The Hive." Flashback twenty more years to when young Molly (Mandeiya Flory as a kid, Tessa Thompson as an adult) saves a little CGI alien, inaugurating a lifelong fascination with the Men in Black, then flash-forward twenty...three (?) years to Molly applying for the FBI and CIA before she somehow finagles her way into MiB headquarters and wrangles an internship with Agent O (Emma Thompson). Said internship involves going to London and partnering with the philandering, James Bond-ish Agent H, who gets out of a sticky situation by fucking an alien squid thing. (We're a long way from the will-they/won't-they? flirtation of Tim Burton's Planet of the Apes, Dorothy.) The idea of modelling this movie on the James Bond conventions is fine in a we're-out-of-ideas sort of way, I suppose, but then MiB4 becomes the very worst Hope/Crosby "Road" movie ever made, which is an extremely low bar because those movies were terrible.

Molly is a studious bookworm type who's never felt love and H is a stud who hasn't quite been himself since that night on the tower. Sparks! No, no sparks. There's a scene early on where it's clear that H is pimping out M to an alien coded as ugly (Paul Brennan) and M asserts her feminist credentials before agreeing to play along for a while. Later, H says "Men...AND Women in Black!" when announcing them and offers a cheesy thumbs-up. At least when MiB4 panders to the new wokeness, it's doing it aware that it doesn't know how and doesn't really give a shit besides. What made the first three movies work to the degrees they do is how good Will Smith is at effortless, charismatic outrage and how good Tommy Lee Jones and Josh Brolin are at deadpan boomer bureaucrat. Smith is probably our best avatar for the class divide, and he's carried the load for better or worse since his days as the Fresh Prince. The interplay between him and Al Gore's ex-roommate is a gentle warning, in précis, of our current struggle between the centrist politics of thirty years ago, all stoic acceptance of rules, and the wave of extremism that has polarized the conversation in this country, with hippies who want everyone to have the bare minimum on the one side and bona fide Nazis on the other. There was a joy in watching that interplay unspool against the backdrop of an actual immigration crisis. And in the rearview, Men in Black 3 only grows in my estimation. Now, rebooting the series like that Jason Bourne movie that was an origin story for Hawkeye, the Men in Black saga tries to Rosencrantz & Guildenstern a WOC Lisa Simpson and a handsome white guy who hasn't been the same since getting mind-wiped. There might be a movie here where the white guy continually fails upwards while the black woman has to be as white as possible simply to get a shot, but that's not this movie.

Anyway, turns out there's a mole in the London office of the Men in Black, and if you don't know who and why that is, then this is the very first movie you've ever seen. I'm glad you're seeing a movie! They're great. I do wish you'd started with a good one and hope you'll give the whole experiment another try. The true horror of MiB4 is "Pawny" (voiced by Kumail Nanjiani, who seems like a nice person), a cutesy little sidekick character who looks like a red dildo. Pawny comments on everything with insipid asides and adorable facial expressions. He likes Agent M a lot and sits in her pocket for the second half of the film. One of his punchlines is that he doesn't like Agent H at all. He'll share this after Agent H has put Pawny in a box or something. It occurs to me that you write something like this when an exec gives you notes to skew younger, maybe paving the way for a spin-off where Pawny's product-placement- eating and drinking family comes to Earth looking for a good time. At the very least, it takes a certain level of callow desperation to conjure something like Pawny to peanut-butter over all the cracks in your screenplay. Mothers who brought their children to the press screening "awww'd" a lot. They also covered their kids' eyes when evil twin bad guys (dancers Laurent and Larry Bourgeois), aliens disguised as eurotrash parkour hipster scumbags, melt a hapless houseboy, leaving behind a bubbling meat puddle with a liquid face. That's right, MiB4 makes no good decisions.

Start with the pacing: it's terrible. MiB4 is boring after two minutes when a dialogue between H and T and two young lovers on the Tower seems to go on for the entire first act. The couple tries to gracefully exit, leading to zippy jokes that land not as witty banter, but as tortured network-morning-show riffing. Every minute of MiB4 plays like five minutes of interior life just spiralling down the drain. Right where the movie is supposed to end, you remember there's an entire subplot waiting to be resolved, meaning there are another twenty minutes left of a film that feels longer than Satantango as it is. (At 114 minutes, it's the longest instalment by eight minutes.) The picture should come with a cyanide capsule and a hollow tooth. Hemsworth and Thompson are exceptional performers, both exceedingly likable and not easily embarrassed. The supporting cast? Except for Nanjiani, they're if anything even better. To see them struggle through this sludge is abhorrent to normal people. Agent M is teased for not having an emotional life, H is teased for being a man-whore, and then there's an alien hiding on Earth whose beard is a creature living on his face. The alien abuses his "beard," which is terrible. That the alien is playing a Muslim man and in effect this Muslim man is assaulting his beard is...really so problematic that I'm not sure I can even unpack it. MiB4 is an expensive-looking trainwreck whose single best moment is an image of Hemsworth holding a tiny hammer and threatening someone during a fight. Get it? That's a reference to the superhero he plays in a franchise that's still viable. The irony is that as a metaphor for the viability of the Men in Black series, the size of the hammer is pretty spot-on.