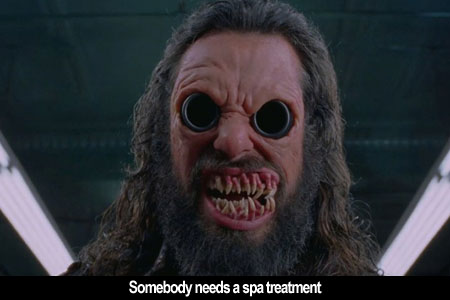 by Angelo Muredda That Barry Sonnenfeld's Men in Black 3 isn't garbage comes as a surprise ten years after the first terrible sequel, and amidst reports of a troubled shoot that got underway before there was even a screenplay. As detailed in a NEWSWEEK piece on the production, Will Smith's enormous trailer guzzled fuel and idled for months while the script was hashed out on dirty napkins, looking like a readymade symbol for a lead balloon in the making. Still, that it isn't the bust it could have been shouldn't make us too generous towards what's essentially a bloated and very expensive nostalgia trip not to its setting of 1969 but to the first film's release year of 1997, a time that's probably too near to really miss.

Launched at the height of "The X-Files"' popularity, Men in Black wasn't necessarily anything new, but its combination of Will Smith's camera-mugging and Tommy Lee Jones's Ghostbusters-inspired deadpanning beside gooey and grotesquely-shaped creatures hiding under their human costumes felt fresh. Like the rest of us, Sonnenfeld seems to have forgotten the events of the second instalment--insert your own gag about the series' best invention, a phallic doodad that wipes your memory of unseemly images--but he can't let go of the first, obviously held up in his mind as the prelapsarian moment before the great career punt that was Wild Wild West. The original's odd-couple dynamic of jabbering ex-NYPD ingénue J meets stone-faced Texas gentleman K is yanked out of the fridge and surgically grafted onto the new product, irrespective of the fact that the ingénue is now 43 years old. Off-kilter rehashing of this sort is typical of a film that occasionally shoots for au courant but always feels a step or two behind, as when a pair of screens at MIB headquarters reveal that Lady Gaga and Tim Burton are aliens, like anyone would care now. The closest thing to progress comes in the closing credits, when we're treated to a SparkNotes rap about the movie by Pitbull rather than Smith.

Regressive as it is, Men in Black 3 more or less works as a lazy matinee, or as a friend put it, an adequate "Doctor Who" episode. If there's a saving grace here, it's that nobody is taking things very seriously. The freewheeling starts with the thinly-sketched plot (on evidence, it appears the script never was finished): a time-travel jaunt spurred by Boris (Jemaine Clement, bored), a tough alien who looks like Tim Curry and has a hand that fires projectiles like the tooth gun from eXistenZ. Off the top, Boris escapes his interstellar prison and skips back in time to the Apollo 11 launch so he can put the kibosh on K before K throws him in the slammer. K's alternate-timeline eradication lets Jones sit the bulk of this one out, as J races back to protect the younger K (Josh Brolin) in late-'60s New York, where he's promptly arrested for stealing a car not because he actually did it, but because he's black.

This racial material is uncomfortable without being either pointed or funny, but Sonnenfeld is otherwise on more solid ground in the past than he is with Smith and Jones's banal present-day variations on their loud guy/quiet guy routine. The time-travel jump--a literal jump off the Empire State Building--is charmingly retro, if a bit anachronistic: Before hitting the ground, J careens through a prehistoric wasteland with squawking pterodactyls, as if he were on "Land of the Lost". We also get a fun but all-too-brief tour through The Factory, with Bill Hader as a passive-aggressive Andy Warhol. Best, though, is Michael Stuhlbarg as Griffin, a savant who doesn't see the future so much as he tumbles through a series of space-time doors that open onto infinite possible scenarios. The mechanics of his time travel are spotty, and he's inexplicably made up to look like Robin Williams's Bicentennial Man, but there's surprising pathos in Griffin's lot, which is to see the myriad outcomes that spring from every minute decision.

Griffin's unmoored trajectory unfortunately mirrors our own progress through the movie, which also seems to have infinite possible outcomes--all meaningless. At about ninety minutes, that might have been an asset, but MIB3, as the posters indulgently call it, overstays its welcome by far too long. In the torturously protracted last act, Sonnenfeld and scribe Etan Cohen (of Tropic Thunder fame) try to up the stakes with a hasty retconning of J's biography that stinks of making it up as they go along, checking off the emotional boxes they failed to hit up to now. Better to have shaved off thirty minutes and let it become the Saturday morning cartoon it should be.