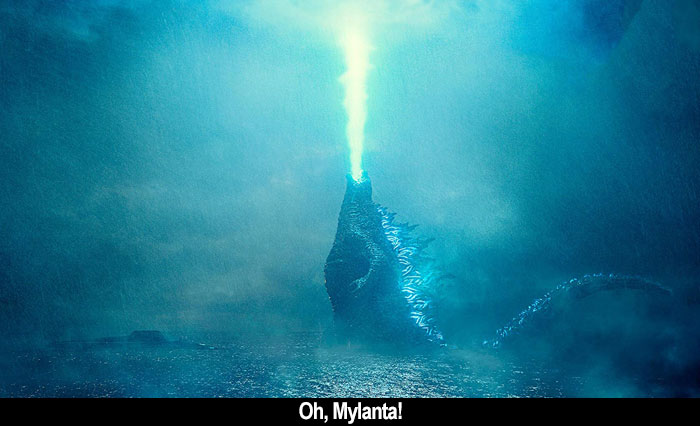 by Walter Chaw Everyone is really stressed out in Michael Dougherty's dreadful Godzilla: King of the Monsters (hereafter Godzilla 2), the crass follow-up to 2014's Godzilla, Gareth Edwards's lovely, Spielbergian reboot of the storied Toho franchise for the American market. Everyone here starts at about a 9, temple-veins popping and spittle flying--the undercard attraction to the titanic title bouts between immense CG phantoms. For his part, everyman wolf biologist Mark Russell (Kyle Chandler) starts at "Nicholson in The Shining" and ramps up to "Pacino in Heat" before settling down somewhere near status quo William Petersen for the remainder. That little muscle in Chandler's jaw gets a good, clenched workout. Mark is called onto the scene because his ex, batshit Dr. Emma (Vera Farmiga), has spirited away their high-strung daughter, Madison (Millie Bobby Brown), who's designed an electronic doohickey called "Orca," the better to talk to all the giant monsters people have discovered across the globe. Operation of said doohickey appears to involve standard smartphone skills, so the necessity of pulling Mark out of the wilderness to help track down Emma is suspect. He's certainly scream-y and agitated about the whole thing.

Emma's plan is to Thanos Earth through the intervention of these radioactive kaiju, the better to cull the human contagion and inspire new plant growth. It's the only way, you see, to counteract the effects of climate change. One fascinating thing about Godzilla 2 is it's a doomsday fantasy that essentially embraces the notion that it's too late to do anything about anything. She's right, in other words, and her plan is a good one, except that one of the monsters she awakens, King Ghidorah, is from...wait for it...wait...yes, Outer Space. Our screechy humans realize this when they discover hieroglyphs in Atlantis or some shit, which they promptly nuke out of existence because nuclear power, set up against the electrical power Ghidorah represents, is the far superior option to... Look, I have no idea what this movie's message is, ultimately. The characters sit around saying stupid things in stupid ways, and then it gets incredibly loud for a while. Dr. Serizawa (Ken Watanabe), who provided a welcome anchor to the Toho series in the 2014 film, is reduced here to fanboying Godzilla for no real reason before delivering long, rambling, wise speeches he read in "a fortune cookie." Having him say that instead of Ziyi Zhang's Chinese mystic Dr. Chen (or Dr. Ling--she has a twin, I think, I don't know, stop asking) makes it less overtly racist than actively an attempt to avoid racism while still preserving a fundamentally racist line. Godzilla 2 isn't racist, though. It's too stupid to be racist.

Most of the human parts of the film are centred around a flying aircraft carrier/stealth bomber run by a constantly-yelling Col. Diane Foster (Aisha Hinds). There's a cantankerous old Quint figure, Dr. Rick (Bradley Whitford), who comes to replicate Robert Foxworth's legendary performance as a righteous Mike Brady in John Frankenheimer's cult-classic eco-terror flick Prophecy. Ice Cube's son is in this, too, as a soldier tasked with giving the "easy" version of the technobabble ("Oh, I get it! You want we should jump into the lightning ball!"). Charles Dance plays the bad guy, who--TWIST--is not that bad compared to Mrs. Thanos. And Sally Hawkins reprises her Godzilla role for two minutes to tell Mark he's the only one who can make the squiggly lines bigger or smaller on his ex-wife's whatsit. Later, Mark hotwires the fucking thing with a paperclip or something when this gadget that everyone wants is stolen from a maximum security facility by Madison, who promptly attaches it to Fenway Park's PA system. There's a bit in the second Jurassic Park film where allegedly smart people can't figure out why a mother T-Rex is chasing them, covered as they are in the animal's baby's blood. Godzilla 2 replicates that scene when Maddy, trying to get away from King Ghidorah after summoning him, holds fast to the thing she used to summon him.

Godzilla 2 is full of these head-scratchers. The motivations are hazy and not made any clearer by all the shouting and crying. The dialogue, when it isn't nonsense exposition (Mothra is married to Godzilla, you'll learn--it's like Mad Libs but for blockbusters), is mostly people barking deadlines. "Six minutes until arrival!" "Four minutes until touchdown!" "Twelve minutes until detonation!" It's never not groan-inducing, because each countdown means at least that much time is left until the whole ordeal stops. Imagine a dentist's visit where the only thing they ever say to you is how much longer they're going to be drilling into your face--and it's never "zero." When Edwards's Godzilla came out, I was stunned by its patience and how respectful it was towards both the audience and the Godzilla legacy. And its set-pieces were just gorgeous. It's a film made by people who truly love the Godzilla movies. Godzilla: King of the Monsters is made by people who hated Edwards's film. Everything comes to a head in an incomprehensible monster brawl where the outcome is inevitable and the stakes are hazy and indistinct. But at the end of 140 minutes of narrative foaming-at-the-mouth and eardrum-shattering nonsense from the school of Michael Bay, no one in their right mind probably expects more than man-children bashing their action figures together in a fit of orgasmic destruction. That's the state of things now in our age of tantrums and organized campaigns to homogenize popular art. Difference will not be tolerated and so all of these films, after a certain threshold, hold to the same pattern of set-up to escalating action. Like porn, our most expensive entertainments cater to our animal logic and desire for familiarity. The worse it gets out here, the more desperate it gets in there. Godzilla: King of the Monsters suggests it's hell out here. It's not wrong.