by Walter Chaw Gareth Edwards's Godzilla, the 32nd Godzilla film just including the Toho series and the three previous American contributions, manages somehow to walk the line between nostalgia for the guy-in-a-suit heroism of the earlier installments and the demands and expectations of the modern CGI wonderland. It has Japanese actor Ken Watanabe be the mournful, grave centre of the piece, allowed at one point to utter "Gojira" (later, on a radar, we see it spelled out in obeisance to the movie's origins) and given the film's most crowd-pleasing line, right before shit gets real in San Francisco. It cares deeply about the monster's place in Japanese culture as a simultaneous reminder of what happened to the country during the war, its humiliation afterwards, and its ambiguous place in the world as Japan reconstructed its image. What confused me most when I watched the Toho flicks on Saturday afternoons on a 9" b&w television was that Godzilla seemed heroic--every bit as nuanced, as conflicted, as ronin as a Mifune samurai; a hero who would return, like Arthur did for England, when the nation needed him. The Godzilla legend is a fable of reconstruction and self-sufficiency--a Leda and the Swan story, where power is drawn from the very source of victimization. He's a complex national symbol, perhaps the definitive cross-cultural Japanese signifier, and the movies that get that (my favorite is Destroy All Monsters, with its dabbling in female hive minds) are brilliant bits of sociology and history. Edwards's Godzilla gets it.

Edwards understands that for all the gritty reboots, solipsism, and city-levelling introspection of our post-9/11 films, what's been lost is any kind of feeling of hopefulness. Zack Snyder's Superman reboot is ground zero in that conversation in more ways than one: destroying cities and breaking necks without much concern for the common man--for us. There's a scene in Godzilla where our hero Ford (Aaron Taylor-Johnson) and our other hero, Godzilla, share an exhausted intermission together before gathering themselves for the finale. It's ridiculous, I know, and it's perfect, because there's no comfort in gods fighting one another if there's no recognition of us in the midst of their quarrel. It's metaphysical, and existential. Godzilla only works because of this bit: God has to acknowledge our existence, lest God be deemed callow and the universe insensate. The key to everything, Godzilla gets it. It also gets that while the money is in the portraiture of leviathan, there's so much of that out there (Pacific Rim, for instance) that it's no longer novel, but fatiguing. The film hides Godzilla for almost the duration of the picture. We get glimpses and, in the final city-shattering, we get gestures and forms in shadow and silhouette before a few showcase reveals. The first moment of delight--and there are several--is when a kid watching television catches a special report and we're teased with a glimpse, just a glorious flash, of monsters fighting while mom does the dishes. It's how most of us started watching these films and it's pitch-perfect. It is, indeed, the choice Spielberg would have made.

All the set-ups for these films are variations on a theme. This one follows suit with the opening disaster, the scientist no one listens to until it's too late, the people on the ground, then the pointing and running as Godzilla rouses himself, the product of radiation, to battle other products of the same contagion. The essential sadness and irony of the character informs Godzilla, bleeding through into a script that namechecks Hiroshima (just as The Wolverine namechecks Nagasaki) and circles around the peril of EMPs in exactly the same way The Day After nuclear armageddon cycle did--making the movie both a child of the '80s and a backwards-looking lament at the places technology has brought us and our ownership of the whole mess. Godzilla rouses to fight a pair of monsters seeking a place to mate (an interest Edwards ports over from his own Monsters), and Edwards even gives the "mother" beast a moment that reminds a great deal of the pitiful death of the Earth Elemental in Hellboy II. In the place that our heroes are forced into, utilizing steam locomotives and analog detonators to "outsmart" the EMP-generating baddies, Godzilla offers this idea that the scariest thing about nuclear war for us is the "stone age" aftermath. Much of scientist Serizawa's (Watanabe) dialogue is the usual boilerplate about the arrogance of man in the face of nature, marking this as an oblique climate-change film if tilted a certain way, yet the effect of it all is the delicious tension of millions of dollars in state-of-the-art technology enlisted to resurrect something that worked best when it interacted in the space between its presentation and the imagination of the spectator. Godzilla is best read as a blockbuster that reminds us that the best blockbusters were carried off with rubber suits, spit, and a few gallons of karo syrup.

Near the end, as smoke and debris billow and obvious 9/11 imagery of falling towers fills the screen, there's this moment that resembles dance. It's spoiled in the trailer but still has real majesty in the moment, on the big screen. Godzilla's tail whips through, causing eddies behind it. Lightning flashes and Godzilla appears, captured mid-motion in something that looks a little like a tai chi pose. It's ridiculous, of course, but it's unselfconscious, and it clarifies that sublimity is maybe impossible without the courage to be silly. If I'd seen that when I was a kid, I would have shouted with joy. In truth, I shouted anyway. Godzilla is a delight. It's absolutely true to its source, finds room for sobriety in its references, and delivers the goods without devolving into hours of giant things punching each other. No monster fight, in fact, occurs without a human, foregrounded micro-drama to give it context or, as in the picture's centrepiece, set on a railroad trellis overhanging a mountain gorge, without a compelling, driving rationale for the beast to attack. It has an image that calls back to the Planet of the Apes sequel that reveals the morlock culture worshipping an unexploded nuclear weapon; another clearly inspired by Michael Whelan's art for H.P. Lovecraft's paperback reissues; countless others that demonstrate similar love and awareness of the film's legacy in pictures. It's a gestural work that understands its audience, its source, and whatever it was that made a guy in a rubber suit (something Edwards literally references in a brief, clever moment during the opening credits) so powerful in the first place. It's great. I can't wait to see it again. Originally published: May 16, 2014.

THE BLU-RAY DISC
by Bill Chambers Godzilla comes to Blu-ray from Warner in the customary BD/DVD/UV combo pack. The 2.40:1, 1080p presentation is, I presume, a faithful and uncanny approximation of the filmmakers' intent, but to my eyes it's lacking in both pop and depth. Saturation feels surprisingly reserved and the dynamic range in those night fights could be stronger--a lack of contrast tends to flatten them to grey murk. Though the image has a cinematic subtlety that helps make seamless the intricate blend of practical and CG effects (DP Seamus McGarvey has talked about shooting the movie anamorphically to tone down the ARRI Alexa's sharp sensors), I can't help but feel that the sourced clips within the disc's documentary extras are substantially closer to my memory of a rather less wan and dim theatrical experience. Here are a couple of A/B comparisons: 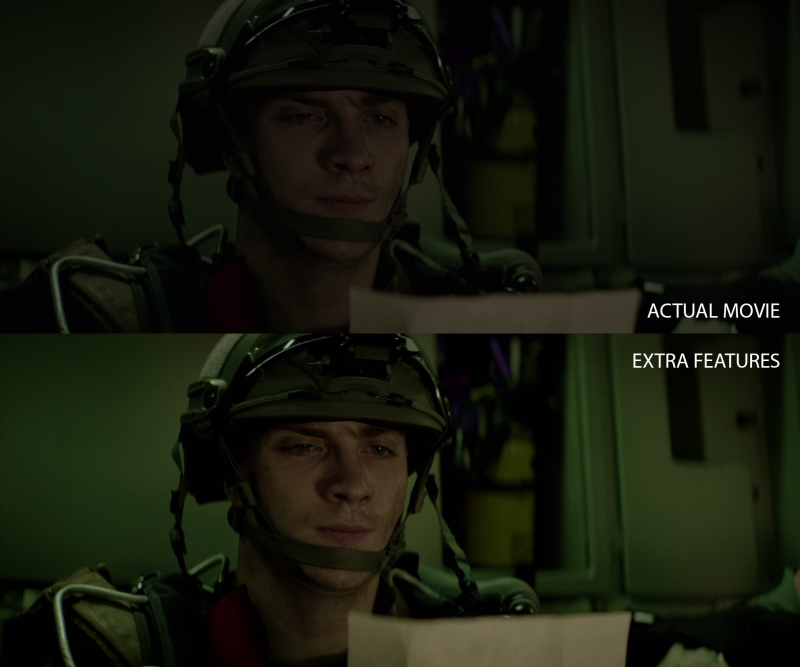 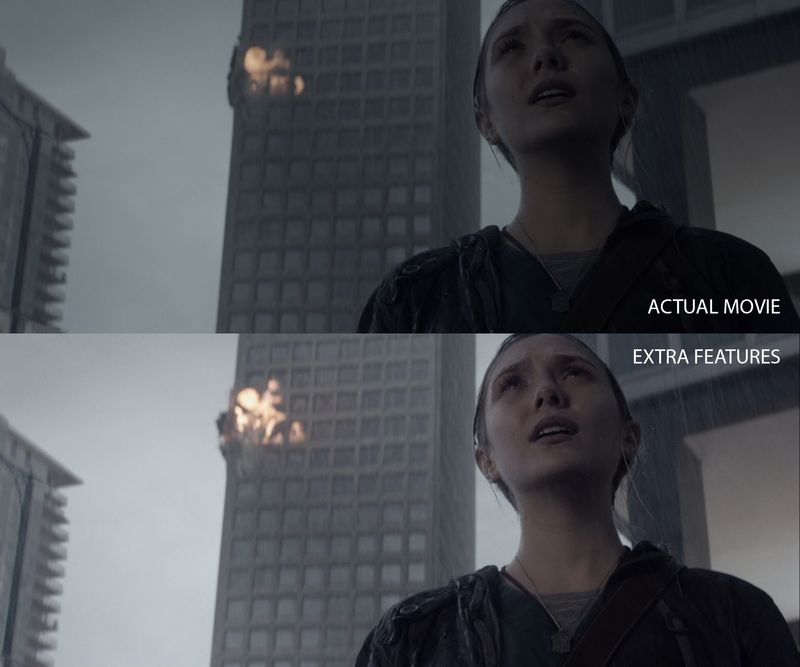 Since these extra features were produced for Blu-ray, I have to assume that any excerpts from the film come from the DI, but as our own Bryant Frazer pointed out to me on Twitter, "It's all in metadata now so maybe the movie file made it to marketing but the colour info didn't." Whether a mastering error or an aesthetic choice, the comparatively poor gamma on Godzilla proper is unfortunate, although the attendant 7.1 DTS-HD MA track is a hell of a consolation prize. This is a dazzlingly-discrete mix that churns out every flavour of bass, from the guttural animal kind to the unique groan of collapsing steel, while also immersing the viewer in next-level Irwin Allen panic. Alexandre Desplat's brass-driven score emerges from the fray like Godzilla himself, battle-weary but none the worse for wear.

HD supplementary material is divided into two categories: "MONARCH: Declassified" and "The Legendary Godzilla." The former consists of three featurettes--"Operation: Lucky Dragon" (3 mins.), "MONARCH: The M.U.T.O. File" (4 mins.), and "The Godzilla Revelation" (7 mins.)--that are basically narrated remixes of the film's opening-credits sequence, and a little too reminiscent of all that masturbatory Dharma Initiative fluff that padded "Lost"'s season sets for my taste. Traditional making-of material begins with "Godzilla: Force of Nature" (19 mins.), a glossy, back-patting overview of the production focused, like all of these featurettes, on director Gareth Edwards's vision, though highlighted by a GIF-destined moment of Bryan Cranston doing a stomp-Tokyo pantomime. "A Whole New Level of Destruction" (8 mins.) is about the complementary philosophies of Edwards, production designer Owen Paterson, and VFX supervisor Jim Rygiel, who did as much location work as possible, using a giant cinderblock suspended on a crane to instantly simulate monster footprints on cars and other property. "Into the Void: The H.A.L.O. Jump" (5 mins.) zeroes in on the skydive that became the iconic teaser trailer, a set-piece Edwards devised as an audition reel to get the job and which changed not one iota from its previz animatic, despite complications in securing the right-size airplane. Finally, "Ancient Enemy: The M.U.T.O.s" (7 mins.) touches on the creature concepts, including Godzilla's own redesign, although the most interesting part is hearing that producer Thomas Tull mandated multiple monsters to Edwards at the outset. A HiDef trailer for Edge of Tomorrow--or is that Live. Die. Repeat.?--cues up on startup. Also available in a separate Blu-ray 3D edition.